Disneyland Adventures is going to be a dream come true for some young and young at heart Disney fans. Previously a Kinect title, Disneyland Adventures has been retooled and is now playable with a standard controller, allowing Disney fans to explore Disneyland until their is content. You start out on Main Street and the whole park is available to you from the beginning. After meeting with stars such as Mickey Mouse, Donald Duck and Goofy I set off to explore the park.

I have been to Disneyland many times and I have a good idea of where everything is located. With that being the case I was impressed with how accurate of a representation this game really is. I always enjoyed going on the Star Tours ride when at Disneyland and immediately went to Tomorrowland to see if that ride was there in the game. Sadly the ride was there but I couldn’t do anything with it. Other rides like Space Mountain and the Matterhorn had activities associated with him which is how you “ride” these rides in the game. Space Mountain had a couple of different levels where you were flying in space and you were trying to pick up some collectibles and basically following your tour guide through the galaxy. It had a little bit of a Star Wars feel to it although there were no Star Wars characters involved. Going over to the Matterhorn I was able to do a level where I controlled a bobsled down the mountain and then another level where I was able to ski with Goofy and more. If you want to go to Never Neverland with Peter Pan then you would go to where his ride is located in the park where you will get to soar through the skies with Peter and have a sword fight with Captain Hook, among other things. As I alluded to with Star Tours not having anything playable, not every ride has an interaction in this game. That was a bit disappointing for me to see but I totally understand why that is at the same time. 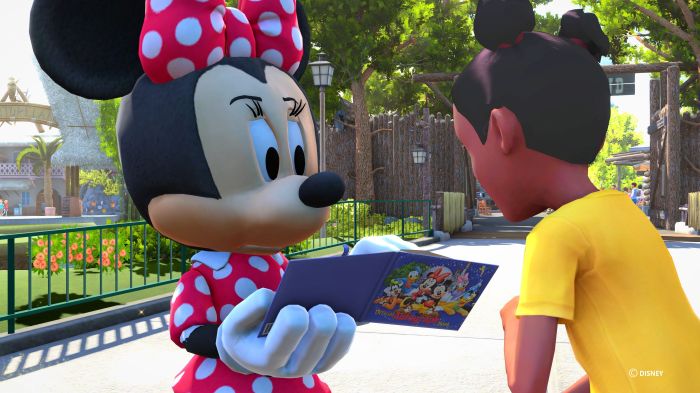 Of course there are others things to do at Disneyland besides the rides. Disney characters are all over the park as you would expect. As you go through and do more attractions like Space Mountain you will earn money. Once you get enough money you can go into one of the shops to buy souvenirs. Some of those souvenirs include autograph books. I went into one of the shops on Main Street and bought a souvenir book and then tracked Mickey once again and had him sign my book. There are different books in different lands for you to get to have people sign. There are some achievements tied to them as well such as getting 10 gamerscore for completing an autograph album. There is also another one for dancing with all of the princesses in the park as well as another one for hugging all of the villain characters and, well, you get the point. There are also outfits for you to buy and wear around the park, pins to collect and more.

As you explore the park you will find different Disney characters and quite a few of them will need your help. In Toontown, Mickey is running for Mayor so you need to complete some tasks that will help his campaign. During the early parts of the game you see that Donald has lost his hat on the Matterhorn ride so you need to go do those attractions and then once you get his hat you can give it back to him. Belle needs to to find some books that are scattered across the park. Pinocchio needs your help so he won’t be late for school and so on and so forth. It is enough to keep you busy for a little while and if you happen to be a big Disney fan you will probably love interacting with the characters in this manner and getting to help them out. 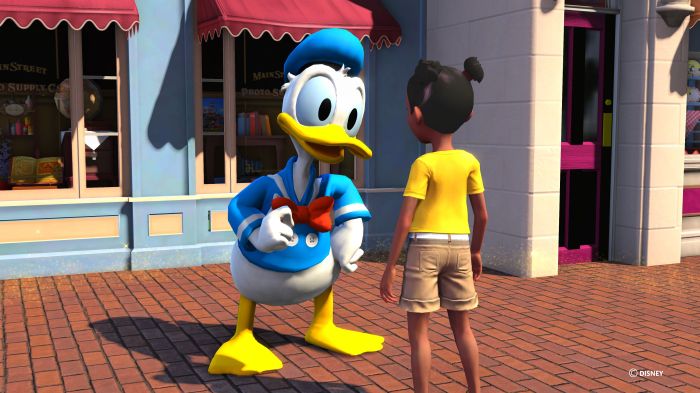 As I mentioned up above I am familiar with Disneyland’s layout but if you aren’t there is a nice park map you can use. It shows where all of the different lands are located and there will be icons on the screen such as an exclamation park if the game wants you to go to a certain area to do something. Additionally there is somewhat of a GPS feature that you can use that will help guide you to the next place you are supposed to go to if you happen to be completely lost in the park. As you progress in the game you will acquire different items that you will need to solve some puzzles. The first two items I received was a camera and a magic wand. The camera’s use should be pretty self explanatory while the wand can be used on certain items to help you out whether that is getting you more money or solving a puzzle. If you use the magic wand on the Sword in the Stone, for example, a bunch of money will pop out of it for you to collect. Later on you earn items like a fishing rod and a megaphone that you will use to solve other puzzles or find other secrets. There is also an adventure journal that you will have that will keep track of your current adventures so if you put this game down for a bit and then come back you will be able to immediately see what you were doing.

Walking around Disneyland in this game is pretty awesome. They even have some of the carts that I have bought food from in the past in the same area they are in when you visit the real amusement park. For those wondering California Adventures is not a part of this game, just the main Disneyland park. With all of that said I do have a few complaints about this game. The first one is the occasional framerate drop. It isn’t really egregious or anything but it can be a bit of an annoyance from time to time. There are also some instances where the controls feel a bit floaty like they didn’t fine tune them enough when transitioning over from using Kinect. Finally the loading times in some of the attractions are way too long. I played this game on both an Xbox One S and an Xbox One X and while the game performed better on the Xbox One X the loading times are still a bit longer than they should be. Neither of those things are game breaking or severely hamper your experience, they are just annoyances. 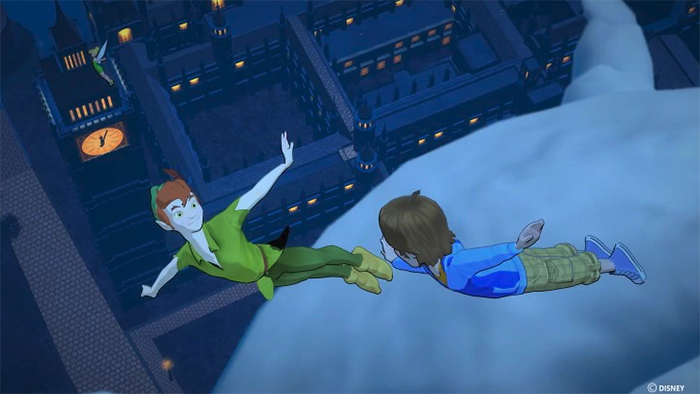 Whether or not you enjoy Disneyland Adventures will depend on a number of things. For starters, young Disney fans should have a blast with this game. My niece loves going to Disneyland and I think she would probably fall in love with this game. People who are older but are still massive Disney fans should also get a kick out of this game and the things you get to do. If you don’t fall into those groups though then this probably isn’t the game for you, unless you want to try and get some fairly easy gamerscore. They did a pretty great job of replicating the experience of walking around Disneyland though and the way they handled the rides was pretty clever. Be sure to check this out if you are a Disney fan or recommend it to someone who can’t get enough of Mickey, Donald and company.