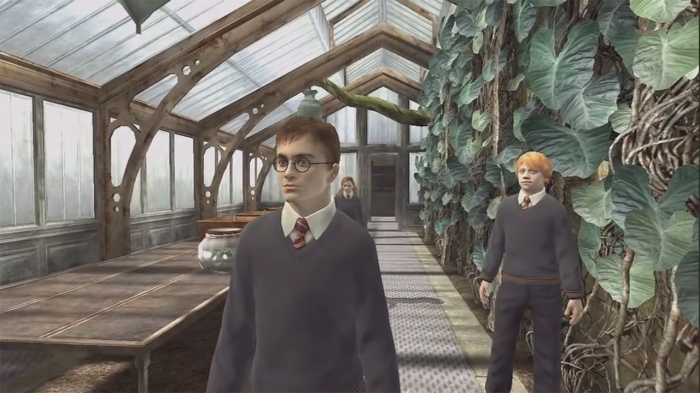 Going into a review for a movie based game, no one really knows what to expect. There have been some good movie tie in games; however, there have been many more bad ones. Unfortunately Harry Potter and the Order of the Phoenix tend to fall in the second category. This game tries to immerse the gamer into the world of Hogwarts, almost at the expense of the rest of the game. To EA’s credit they did do a good job of trying to make it feel like you were in one of the movies. There is no HUD or any other visual cue on screen that would normally indicate things such as health. This helps to draw in the player as they are not continually staring at an arbitrary icon or meter indicating their status. Instead when Harry gets injured he moves around a bit slower and he will also be hunched over a little bit indicating he is injured.

As Harry you are immediately thrown into the game with little to no story and you have to figure out what to do. Your two companions, Hermione and Ron, are continually by side for times when you need their help or expertise. Unfortunately the A.I. in this game is so bad that often times they will become more of a hindrance than a help. There was more than a few times where they would block my path when I was trying to accomplish a certain task. I would walk up to a table and talk to someone with both of them trailing behind me. However when I was done and turned around to walk away they would continually stand there and block my route. Most of the time I had to try and push them out of the way which didn’t always work at first and sometimes took a minute or two to accomplish, especially if they were blocking a doorway.

Once you got past them then there was the grand staircase to deal with. The grand staircase had a bunch of staircases that would alternate position. If you needed to go into the direction that a staircase was not facing then you possibly had to wait at least a minute before it would come your and you could continue on your journey. For all of the things that EA tried to do to immerse yourself in the game, it was these types of things that immediately brought you back to realization that this was just a game. Sometimes when you need to cross a space the staircase would quickly come to you and you didn’t have to wait. There didn’t seem to be any rhyme or reason. Frequently I ran out of a room to try and use the stair case before it moved only to have it move at the last second and I was forced to literally stand there and wait until it returned.

The majority of the quests in this game were either fetch and/or search quests. For over half the game you were running all around Hogwarts trying to tell certain people about a secret meeting that was going to take place. Once you located the person you were looking for they would either head immediately there or you had to do something for them like do their homework for them by finding a book in the library or something of that nature. What this meant was there was a lot of running around all over Hogwarts which did tend to get repetitive. There is even an achievement for walking 9 ¾ miles! 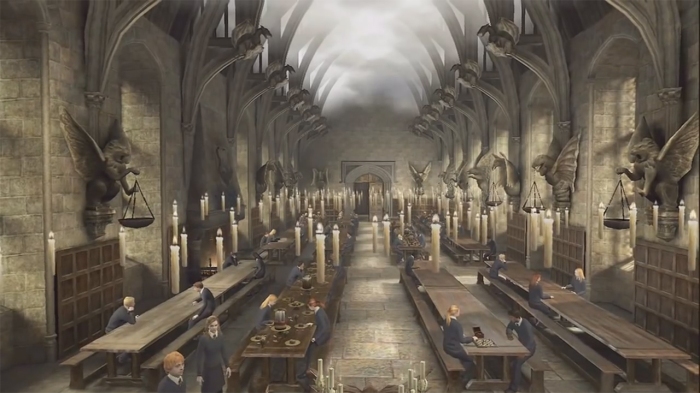 With the above being said the game did have its share of good points as well. If you are a big Harry Potter fan then EA did a pretty good job of the character modeling as the main characters did look like their real life counterparts. You have a map that you use to get around Hogwarts and the way EA chose to implement it was awesome. You could select either a person you were looking for or a specific location you need to get to on the map. Once you did that then black footsteps would appear before you and help to lead you to your destination. Given how big Hogwarts is, this feature is definitely welcome. The combat system was fairly simplistic allowing for anyone to pick up and play. You don’t need to be a fighting expert or anything of that nature to be able to successfully utilize the combat engine in this game. A lot of the combat revolved around the right analog stick. You would hit the “Y” button to take out your magic wand and then use the right stick to perform spells. For example if you were in combat and you were quickly hitting the joystick downward then that would try to disarm your opponent. If you aren’t in combat however hitting the right joystick downward would pull an object closer to you. It is a pretty cool combat system however is marred by somewhat unresponsive controls and the camera control or rather lack thereof. Sometimes you had to cast a spell a couple of times before Harry would realize what you were trying to do and since you couldn’t control the camera there would be some really weird angles at times that you would make things harder than they really were.

Overall, this is your typical movie tie-in game. It was rushed out the door to coincide with the theatrical release of the movie so that the developer can make as much money as they can. There was very little story in the game and unless you are a big Harry Potter fan you probably won’t have a clue as to what is actually happening. For people who are big Harry Potter fans you might enjoy running around Hogwarts and experiencing all that it has to offer. The locations do look pretty authentic and fans might enjoy casting magic spells as Harry. For others this game tends to be nothing more than an exercise in frustration. There is a demo on Xbox Live which I highly recommend downloading before purchasing the final game. The demo is a good representation of how the final game is like, so if you don’t like the demo, be sure not to buy this game.