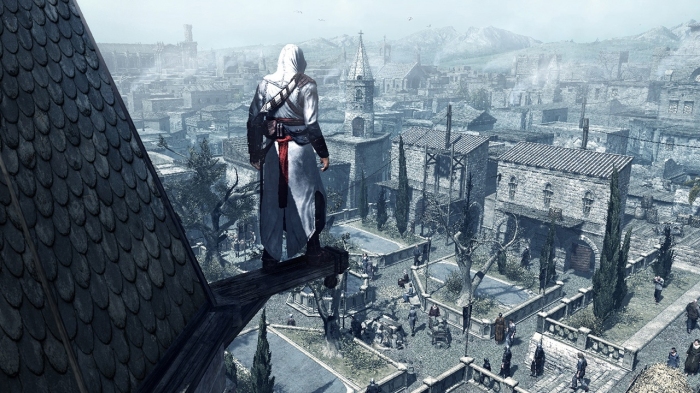 Assassin’s Creed is one of those rare titles that is the first in a new series, yet still has a huge amount of hype surrounding its release. Ubisoft has done a tremendous job keeping this game in the mind of gamers during its development. Assassin’s Creed features you as an assassin named Altair. You get to experience a vast open world exploring three cities from the Holy Land in the 12th century. While you cannot explore everything at the beginning of the adventure, as you progress you will get to explore more and more. Throughout your adventure you will explore the cities of Damascus, Jerusalem & Acre. In addition to all of that there is the countryside in between these three cities as well as small villages that you will come across throughout the game. Before the game was released the complex control system was talked about at length; however, after playing the game that doesn’t appear to be true at all. The controls flow very nicely and I had no trouble at all learning how to control Altair. Each button will do something differently depending on whether you are trying to be low profile or high profile. The buttons are also based on situational needs. An example would be that the “B” button is normally used to push people out of your way; however, in pickpocket missions that button is used to steal the item from your target without them noticing. The combat is also easy to pick up, yet can be hard to master. You will have to employ some strategy if you are up against multiple guards at a time. One of my favorite strategies was to push a guard to the ground and then go take care of another guard quickly before the one I pushed got back up. You can also hold the attack button down a little longer than normal and you will have a more powerful attack that will have a better chance at toppling your opponent.

One thing that is immediately apparent in this game is the incredible job that Ubisoft did on the world itself. The world is incredibly detailed and definitely looks like a living, breathing world. The cities are filled with thousands of citizens going about their daily routines. As you explore the cities you will hear merchants talking about what they have for sale as well as other citizens trying to rally people towards their cause. You feel like you are really in a market and are just a small part of everything that is happening around you. One of the big features that were touted about this title was the ability to basically climb anywhere you want. This will lead you to some breathtaking vistas as you climb to a vantage point at the top of a tower. By climbing to these “view points” you can use your eagle vision to open up other parts of the map and other areas you can explore. When you do this the camera circles around giving you a 360 degree view so that you can view the whole town as well as the countryside beyond the town walls. The draw distance for the game is quite impressive with very little to no pop in.

You will also be put in to situations where choosing the more discreet route would be the most advantageous. When I first arrived at the city of Damascus I noticed that there was a line of guards blocking the entrance to the town. I also noticed that there was a small group of guards harassing a citizen nearby. This citizen turned out to be one of the town’s scholars and a bunch of his friends were standing off to the side too scared to do anything. I quickly went up and took care of the guards and they repaid my kindness by allowing me to blend in with their group as we were all wearing similar clothing. After I blended in with the group they started to walk towards the entrance to the city. As we got closer the guards stepped aside and let us enter peacefully. Once we got past them I separated from the group and went off to do my own thing. It is instances such as this one that make this game so great. There are always multiple ways to achieve a task. You can try and do things discreetly or draw a lot of attention to yourself; however you will have to deal with guards chasing after you and things of that nature if you choose this route.

The audio quality of this title is remarkable as well. In addition to the previously mentioned merchants and political speeches, you will hear a city that is full of life. If you bump into a woman that is carrying a pot on her head and cause her to drop it she will look at you and berate you for bumping into her. The voice acting for all of the characters has also been done really well. As you are walking down a street you might hear the cries of help from a citizen who is being harassed by guards. Also as you climb higher you will hear different sounds such as an eagle when you get to the different view points that you have access to throughout the game. The crowd of people below will also make a comment if they notice you do something unusual. There were quite a few times when I was climbing up a building and I heard someone below say, “Well, I’ve never seen that before” and different things along those lines. Another thing that will become immediately apparent is how good the character models are. Each character is exquisitely detailed with the proper clothing psychics as well. You will be amazed as Altair stands at the top of the tower and you see his clothes blowing realistically in the wind. 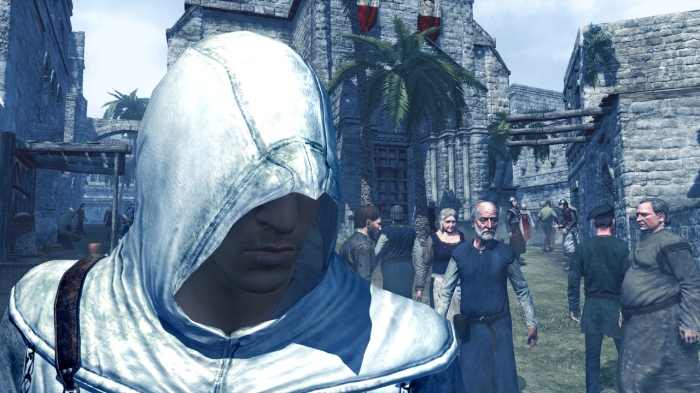 In addition to all of this, Assassin’s Creed also has an amazing story that will keep you engrossed until the very end. The deeper that you get into the story, the harder it is to put the controller down. There are no cut scenes in the game in the traditional sense however when you are eavesdropping on someone or are doing something that would normally be done in a cut scene the camera can zoom in so you can watch the action unfold before your very eyes. There are also a whole bunch of optional objectives for the player to complete whenever they feel like it. You don’t have to save any citizens if you don’t want to, however if you do they will help you later on. There are also eavesdropping and pickpocket missions that you don’t have to participate in, however you will get a better of understanding of what is going on if you do. For those who like to collect things there is an abundance of things for that as well. Also, each part of the world has flags for you to collect. Damascus might have 100 flags for you to find while the village of Maysaf only has 20. Completing all of these tasks will give you better insight into what is going on in that particular city as well as earn you achievements as well.

Going through Assassin’s Creed you can’t help but be impressed by what Ubisoft has pulled off here. It was an incredibly ambitious title and Ubisoft succeeded in nearly every way. All of the animations are fluid and the environments actually compliment Altair and his abilities. Nothing really looks like it was placed there just for no reason. Running across roof tops, evading the guards, and pulling off a successful assassination are all examples of satisfying elements in the game with a lot more. Really the only potential negative here is that some people might find it gets a bit repetitive towards the later part of the game but being as that is the only real complaint here, Ubisoft definitely has another winner on its hands as well as another valuable franchise to add to their already impressive stable. If you enjoy the action/adventure/stealth genre then this game is a must own. In a holiday season where you have big name titles like Halo 3, Call of Duty 4 and Super Mario Galaxy it is all the more impressive that Ubisoft was able to successfully launch a new franchise. This is one of those breakthrough titles and every title in this genre should follow Altair’s lead.