Sunset Overdrive is Insomniac’s latest game and, quite possibly, one of their very best. It is a tremendous amount of fun to traverse the environment whether that be grinding on power lines, jumping on cars, trying to scale some buildings and more. Style counts in this game so the more style you have the more rewards you will get. Sunset Overdrive is an open world game that is completely over-the-top and insane in the best way possible. Insomniac’s humor shines brightly here as they make fun of not only themselves but also some of the tropes that are prevalent in gaming, such as being able to communicate with someone back at your base despite the fact that you have no communication device at all. The game doesn’t take itself serious at all and had me laugh and chuckling on multiple occasions.

There is a ton of content within Sunset City and it is going to take you a while to do everything. First of all there is obviously a campaign with the game’s story. The game starts out with your character in a dead end job and cleaning after people at a huge party where Fizzco is celebrating the launch of their new energy drink, Overcharge Delerium XT. The only problem is that something went horribly wrong while making this new energy drink and everyone that drinks it turns into a monster. It is the apocalypse essentially brought upon us by an energy drink and it is awesome. You are one of the few people that didn’t partake in this new drink at the party so it is up to you to stay alive long enough to either save Sunset City or escape it. That’s as far into the story as I’ll go so I don’t spoil anything but there are definitely some cool moments throughout. 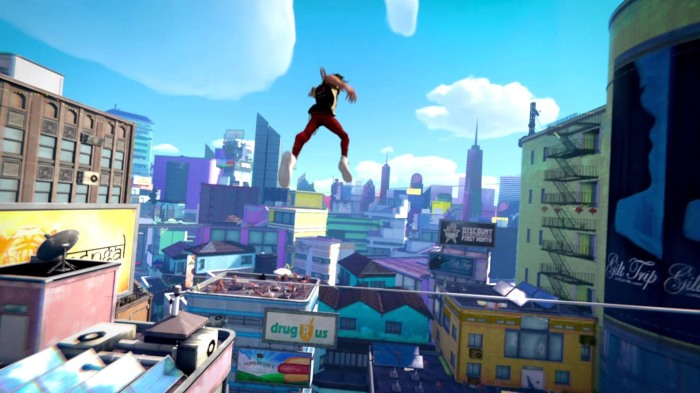 When you begin playing Sunset Overdrive you will immediately notice the bright color palette. There are a lot of blues and oranges and yellows and everything else that make the world incredibly vibrant. The OD (the standard enemies you will face) are generally an orange color and everything works well together. The audio is fantastic as is the humor that goes along with it. There is definitely some cursing and some gore in the game but there is an option to turn that off if you are going to be playing in front of your kids or you simply don’t like that type of thing. The cursing and gore are turned on by default though so you will need to go into the options to turn it off.

The gameplay in Sunset Overdrive is fluid and fast paced once you can wrap your head around what they want to do. This is a game where you don’t really want to stand in just one place because you will get overwhelmed quickly. As I mentioned above, you want to kill with style whether you shoot an enemy while you are in the air, grinding a rail, running alongside a wall or whatever else you may be doing. The longer you can keep your streaks going whether it is traversing the environment without touching the ground or eliminating a large section of enemies, the more style and points you will receive.

One reason this gameplay is so much fun though is the weapon selection. The weapons in this game are definitely crazy and over the top. You have your standard pistol which is called the “Dirty Harry” here but also other crazier weapons such as “TNTeddy” which is a grenade launcher-style weapon that will fire teddy bears that explode on impact. Another weapon is the “Flaming Compensator” which is like a shotgun that can set nearby enemies on fire. A couple other examples are the “Freeze Bomb” which will fire out a projectile that will freeze enemies nearby and make it easier for you to eliminate them as well as the “Pulse Mine” that will shoot a spherical projectile that attaches to the ground. It will then fire a series of projectiles straight up that will cause a shockwave. It is pretty effective and really cool to see. If you want to see how all of these weapons work before you use them there is also a weapon tutorial that you can view where you can see it in action. The more you use your weapons the more they level up and get stronger. There are also “amps” to add to your weapons which will give you an added bonus such as having dead enemies getting a chance to respawn into a Grim reaper who will kill other nearby enemies.

In addition to those amps, there is also overdrives for you to equip. These are also items that you can level up that will help out your character such as being able to increase your health, increasing your ammo capacity, increasing your style generation by a certain percentage and much more. All of this stuff is customizable so you can build the type of character that you want and play how you see fit. As you begin the game you get to create your own character as well so you can wear as much or as little as you want and pick whether you want to play as a man or a woman…Sunset City is your playground to do what you what and how you want to do it. 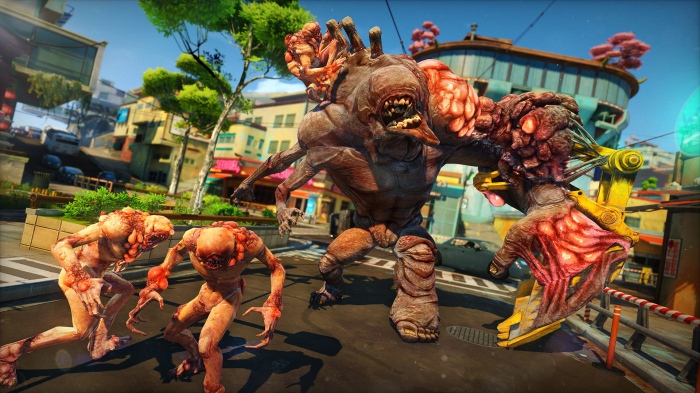 I’ve mentioned the game’s humor on a number of different occasions already but it spawns pretty much all phases, even while respawning. If you get taken out and need to respawn there are a number of different animations you might see. A few of my favorites were when I would get dropped down from above Mission Impossible style, when I would step out of a phone booth, or when they would pay homage to Portal. There is a fast travel system in Sunset Overdrive and the way this works is your character drinks an alcoholic drink and passes out. Your character wakes up and stumbles out of a portable toilet at the point you wanted them to warp to. This is another of many examples where I had to chuckle every time I decided to fast travel. There is also a constant breaking of the fourth wall where the main character might think the camera is getting close and throw a back elbow to make the camera back up or by making fun of some of the things that other games tend to do. One of the weapons that you will get a chance to briefly use is a robot dog. You simply throw his toy into a group of enemies and robo dog goes over and decimates everything to protect that toy. It is awesome and my only complaint is we only get access to that weapon for a very limited amount of time. The bosses in the games are also fantastic and will have you chuckling. I won’t say anything about them as I don’t want to ruin the surprise but they are some of the most entertaining and unique boss battles I have encountered in quite a long time.

Amidst all of the stuff you can do in Sunset City throughout the campaign there are a bunch of side quests to be completed to gain favor with the different factions as well as a ton of collectibles to find. There is toilet paper hanging over poles, smelly shoes hanging from power lines, surveillance cameras to destroy and more. If you are a completionist and someone who wants to get every single collectible you can buy maps for each area from the same guy you buy ammo from. There are even achievements that revolve on getting all of the collectibles so if you are looking for some additional gamerscore, here you go.

As I have demonstrated there is a whole lot to do in Sunset City in your single player world but there is also some multiplayer fun to be had as well. The multiplayer is called Chaos Squad where you can have anywhere from 2-8 players. You will be able to create your own experiences by having people vote on which missions to tackle in the open world while you are utilizing a risk vs. reward mechanic. You can choose on whether you want to pick a mission that will boost the Chaos level in the city but that makes your Night Defense mission more difficult. The higher difficulty will mean you will earn more rewards though if you are successful. There is the exact opposite as well. You can choose to have an easier difficulty where the rewards aren’t as great but you have a better chance at surviving. After you have gone through a few rounds you will then be taken to “Night Defense.” This is where you really need to work together as a team as you deal with an onslaught of different OD monsters. It also needs to be noted here that your single player progress will carry over to multiplayer (weapons, your level, cash, etc.) and anything you earn in your multiplayer sessions will transfer over to your single player campaign. Your options of what missions to participate in appear to be random as well so you every experience should feel at least a little different.

I could keep going on about this game but the bottom line is you just need to go play it. The story isn’t incredibly deep but I really enjoyed it as well as the entire world that Insomniac has created for us to play in. This is by far, in my opinion, their best game to date and I am hopeful that this becomes a new franchise. Sunset Overdrive is a lot of fun to play whether you are going solo or playing with friends. Just sit back, relax and enjoy trying to save the world from an energy drink gone bad that has turned people into monsters.