Disney Fantasia: Music Evolved is a game that you really need to experience to truly understand what is going on. As I was putting the game disc into my Xbox One the first time I didn’t really know what to expect. I had seen the trailers and everything but it didn’t click until I was actually playing. With that said, it clicked immediately once I started playing. Harmonix has done an amazing job here. The gameplay is solid, the soundtrack is varied, the navigation with Kinect is the best yet for a Harmonix game and more. This really is a game that every Kinect owner should own.

The story for Disney Fantasia: Music Evolved essentially revolves around driving noise out of realms that is has polluted. You do this by playing songs and if you complete your goals and play well enough then the noise will slowly be driven out of the realm(s). With that said there really is no “fail” state in this game. You will always get to finish the song you are playing, even if you haven’t achieved your goal. You will need to achieve the goal to advance but novice gamers and others should appreciate the fact that they can just concentrate on having fun whether it is playing with friends or playing solo. There are many different realms in the game each representing a different environment. There is an underwater realm, for example, a space station, a realm in a forest and more. The goal in each realm is to mix your own composition to help drive the noise out. The only way you can get to that point is by earning some magic fragments by playing the songs available in the realm and hitting the goals that the game sets out for you. There is a number of different composition spells such as the sound sketcher, Tone Twister, Rhythm Painter, FX Sculptor and the Beat Chopper. Each one allows you to put your personal touch on the music being played. There is just something very cool about being able to record your own mixes and then when you hear it as part of one of the songs, it really is a great moment. As you drive the noise out of the different realms the story will advance and will have to put your skills to the test to make sure to right all of the wrongs that have been taking place.

The gameplay in Music Evolved is where this game really shines. When you are playing you are essentially the conductor of the music being played, being able to control where the song goes next. There are different cues that you need to hit at the right time such as sweep cues, two-handed sweeps, hold cues, path cues and more. A sweep cue, for example, is where you have to sweep either one or both of your arms in the direction of the arrow shaped cues at the same time that the darts hit them. If you hit the cue correctly the music will go on as normal and might even get a little louder as you are building up your combo. It is similar to Rock Band in that if you keep hitting the right notes then the song sounds great but if you miss a note then the music gets softer. The same thing happens with Disney Fantasy Music Evolved where it is immediately apparent whether you hit the cue on time or not. Push cues are a bit different but the same concept. This time you need your hand to move forward towards the screen and do it at the same time a sphere hits the circular cue. If it is a normal cue then you can just do that motion. If it is a hold cue then you need to hold your hand in the correct position for a few seconds as the circular cue gets filled up. Then there are the curved cues where you need to start the same way you do with the push cues, however, you need to follow the cue on a “track” for this one. If it is slowly going down then your hand needs to go down, if it curves then your hand needs to curve, almost as if you are guiding the cue to the end of the course, so to speak.

One of the most important cues in the game is definitely the switch cue. This is where you can change the complexion of a song. When you see a switch cue appear then you need to push your hand forward at the right time and then quickly decide whether you want to go up, to the left or to the right. The direction you choose will dictate how the song continues to be played. The song might have a lot of guitar at the moment but if you change directions during the switch cue then it might switch over with a focus on drums, for example. By doing this you can remix the songs how you see it and really create your own version of the song. If you had an especially awesome performance you can save it and then watch the replay to see how you did and unlock an achievement in the process as well. 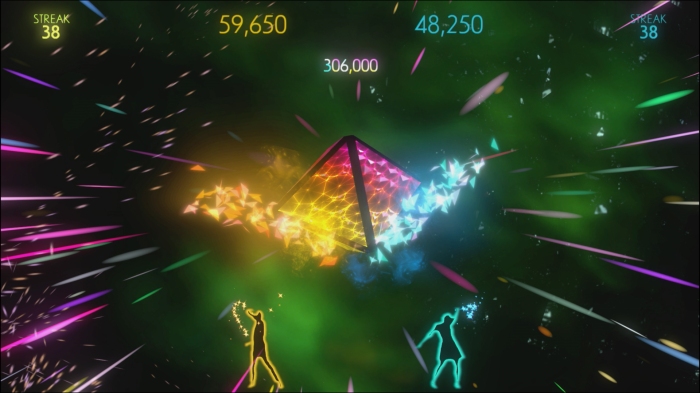 It should go without saying but Disney Fantasia: Music Evolved requires Kinect. You can’t play it with a controller or anything, however, you can play it sitting down if you so choose. I preferred to stand up while playing as I felt it gave me a better range of motion but to each their own. As I mentioned above the navigation in this game is pretty spot on. This obviously isn’t Harmonix’s first Kinect game and I think they really nailed it. In previous games such as the Dance Central series you would need to make a selection by using your hand to put a cursor over the song or item you wanted and then push your hand towards the screen. It worked ok but really wasn’t all that ideal. With Music Evolved they have simplified the process. If you have completed a song and want to continue all you have to do is hold up your right hand over the “continue” button for a few seconds and you are on your way. It is much easier to do and more intuitive. You will still need to be careful with some of the cross body movements when selecting an option but it works much better overall.

There is of course multiplayer in Disney Fantasia: Music Evolved and if a second player would like to join in you will need to visit the Song Library in the game. All you need to do is make sure to stand in front of the Kinect so it can see you and then shake hands with the other person when prompted to begin the mode. If you want to exit multiplayer at any point you can simply step out of the play area where Kinect can’t see you anymore. As much fun as the game is playing solo, it is even more fun when playing with a friend. Craziness will most definitely ensue but in the best possible way.

Disney Fantasia: Music Evolved is a really fun game. It is a game that is really hard to explain and something I struggled a bit with writing this review. There is a demo available right now on Xbox One and you really should download it and play this game for yourself. Once you do so you will immediately get it and see how fun this game can be. Harmonix had some really great ideas here and it was matched with even better execution. Disney Fantasia: Music Evolved is a game that every Kinect owner should own. If you don’t happen to own a Kinect then this game is a big reason why you should pick one up. When it comes down to it, this game is just a whole lot of fun that will bring a smile to your face and that is what it is all about, right? In fact, I’m going to go play some more right now.