Skylanders SuperChargers is the latest game in the popular Skylanders franchise. Every year has some type of new idea or mechanic and this year it is the addition of vehicles. This brings with it new a variety of new gameplay whether you are racing around a track, searching for something underwater or flying through the sky engaging the enemy in a dogfight. Much like Skylanders themselves, vehicles have a class whether it be an earth based vehicle, a magic based vehicle or whatever. Skylanders SuperChargers also adds in co-op for the first time in franchise history which now means you can take on the evil Kaos together with a friend.

You begin the game and find out that Skylands is in a lot of trouble. Kaos is closer than ever to achieving his goal of ruling Skylands and he even attempts a preemptive attack against the portal master. Kaos isn’t the only thing to worry about this time around though as the Darkness is growing in power thanks to the efforts of Kaos and his “sky eater” device. It is up to the Skylanders to save the day once again and this time you have vehicles at your disposal.

The addition of vehicles to the franchises generates a nice variety of gameplay. You might be going through a level and clearing it of enemies and then all of a sudden come to a part where you need to jump in your vehicle and race to the next part. The actual racing works really well and controls pretty well. Driving outside of those sequences takes some getting used to however. The development team did a really weird thing and made the driving controls directional. In other words, think of your vehicle on the screen with the front end of it facing left. Instead of pressing right (since you have to turn right) to get that collectible at the top of the screen you have to press up on the controller to do it. It is really strange and something I didn’t like. That said you do get used to it and by the time I had gone through the whole campaign I was able to drive without many problems but it would have been nice if they had stuck with more traditional controls that we see in other games where you can drive.

There are three different vehicle sets with land, air and sea vehicles. When you pick up the starter pack at your favorite store you will get one normal Skylander, one Skylander SuperCharger and a land vehicle. Just like in previous games you can get through the entire game using just these two characters and the one vehicle. You do not need to spend any more money to get through the story. With that said though, you are going to want to spend more money. In previous titles there were always areas locked away behind elemental gates. If you didn’t have a Skylander with the earth element, for example, then you weren’t going to be able to access those optional areas that required the earth element. I’m not complaining about that as that is how the “toys to life” genre works. The thing is though in the earlier games those were always kind of put to the side. You didn’t really see much of the optional areas so you didn’t really feel like you were missing out on anything. With Skylanders SuperChargers the development got much more pushy with these areas. As you are going through the different missions there will be instances where they highlight this really cool optional objective and the in-game characters that are in trouble are asking for your help to solve their problem. This optional content is no longer off to the side. It is completely in your face about it. They tell you what needs to be done, show you some of the area and basically try to get you interested so you take on their task. It all looks really cool until you don’t have an air or sea vehicle to complete these sections. When I was playing with the basic starter pack this would annoy me to no end so I went over to Best Buy to get one sea vehicle and one sky vehicle. They really try to force it on you in this game and it is something I really didn’t appreciate at all. 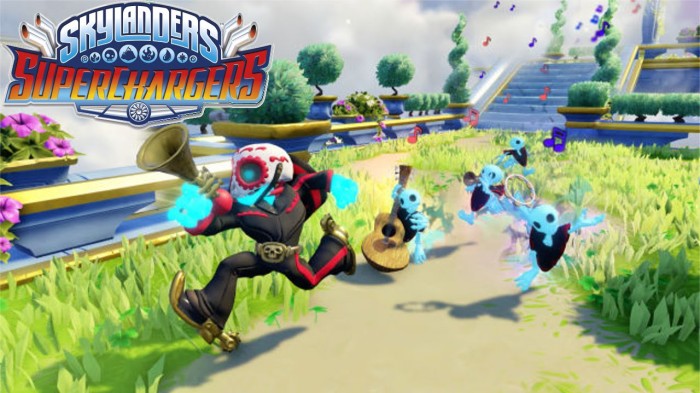 One of the features I have been requesting for years has finally made it to the Skylanders franchise in the form of co-op. Skylanders SuperChargers has both split screen as well as online co-op. Both seemed to run really well and if you happen to be in a vehicle section you are both in the same car with one of you driving while the other one controls the weapons. If you want to switch you can do so with the push of a button which I thought was really nice so that you can experience everything during your playtime. With the online co-op there are two ways that you can go about it. In the options you can toggle it on or off. If you have “join anytime” selected then people on your friends list can join the game. If this does not interest you then you can select the “do not disturb” option. If you happen to be at the Skylanders University you can also go up to Cali to see if any other Portal Masters need some assistance and you can invite friends into your game from there as well.

There are also online races that you can participate in either by yourself or with a friend. These races draw inspiration from the Mario Kart franchise with the various power ups that are strewn around the environment, arrows on the ground to make you go faster and more. The vehicles seem to control really well during these races to and you can even somewhat control your vehicle in midair if you need to twist a bit to get that collectible you spotted at the last moment. There are six different race modes in the game but only three of them are unlocked at the start. The ones you can begin playing immediately are “Single Race,” “Time Trial” and “Online Race.” The modes locked away include “Boss Pursuit,” “Supervillain Cup” and “Mirror Cup.” Those are unlocked with different packs that you can buy at your favorite game store. Not only are some of those modes locked away but there are some courses that you won’t have access to either unless you buy the aforementioned packs. There are six courses available in the beginning but only two of them are for the vehicle that came with your starter pack. The other tracks have two for a sea vehicle and two for a sky vehicle.

The main campaign will take you a little while to go through with just over 50 levels. It is really well made and features the trademark humor that Skylanders has become known for in the past. One of my favorites is still Flynn who I find to be pretty funny whether he is obsessing over enchiladas or acting like he is a ladies man and trying to hit on Cali. Once you get through the main campaign though there is still stuff to be done, if you so choose. There will be other missions for you to do which range from winning in a game of Skystones to successfully racing in a fire environment with a fire vehicle. This isn’t essential to the game at all and is basically just for completionists. You most likely won’t be getting everything in your initial playthrough so this is a good way to keep chipping away at some of those achievement that will require a bit of grinding to unlock. There is a particular aspect about this “after game” content that I enjoy and I’m sure other Skylanders fans will get a kick out of too but I won’t spoil it here.

Skylanders SuperChargers introduces some new mechanics to the franchise which help to change things up a bit. The addition of vehicles is a definite plus and you even get a mini Mario Kart-esque game with solo and online racing. You can absolutely go through the whole game with only what is given to you within the starter pack. You do not need to spend any extra money but if you are a completionist you are going to feel compelled to go out and get additional figures and/or money so you can try and do everything. If you are a Skylanders fan you pretty much know what to expect and should definitely pick this game up as it is a quality entry into the franchise. If you are new to the Skylanders franchise you are in for a treat with the great gameplay and an awesome sense of humor.