Disney Infinity 3.0 is the latest iteration of the Disney Infinity series and this time the main focus is Star Wars. When you pick up the normal retail pack in stores it comes with the standard Disney Infinity base along with a couple of Star Wars figures and the Twilight of the Republic Play Set piece so that you can go through the Star Wars campaign. In addition to that is the Toy Box mode where you can create your own experiences within Disney Infinity 3.0 or play through content made by others. Disney Infinity 3.0 is a game that will be as deep as you want it. You can really dig in and build some great experiences using all of the tools that are provided to you or you can simply browse the content the community has created and just play that. There is something for everyone here.

The Twilight of the Republic play set is the main campaign for this game. As you go through the story you will visit many different areas that are familiar to Star Wars fans. You’ll get to visit Coruscant, Tatooine, the Geonosis System and more. This campaign features action both on the different planets as well as aerial combat in space. The story begins with you invading a droid factory and you need to figure out who is controlling the factory and for what purpose. I won’t go any further into the story than that as I don’t want to spoil anything but as I said above, you get to travel to a few of the more popular Star Wars locale throughout the story.

Throughout the story (as well as in the Toy Box itself) there are different feats for you to accomplish. In the story it ranges from taking out 100 battle droids as Ahsoka to completing all challenges with at least a silver rating to getting 100% of all stars. In the Toy Box you have feats such as playing ten featured toy boxes in the theatre, to defeating Luke Skywalker with Vader’s Special move to harvesting unique crops and much more. Essentially you perform these feats by exploring and playing a lot of the game.

The Toy Box is pretty much the core of the game. This is where you can create and customize as much as you want and the development team has made it really easy for you to do so. Customizing an environment or an object is as easy as equipping your want and then pointing and shooting at the object you want to customize. You can also go a lot deeper and plan out a whole area. There are literally hundreds of items for you to choose from. There are “Creativi-Toys” which you can use in your area. If you are trying to customize a room, for example, there are windows to choose from, furniture, townspeople you can put there, cast members, you can decide the kind of room(s) you want and build a giant mansion and much more. In one room I decorated it so it was an Aladdin room while the other room was decorated to look like the Beast’s castle. I changed the walls, the trim, the light fixtures and more to make it really feel and look like the room was out of the Beauty and the Beast.

When you are creating your own play sets you can create races or pretty much whatever you can think up. This could be where you get a really tiny taste of what it is like to be a game developer. You can design courses or something else entirely and then connect different parts so that it all works together. For example you could make it so that if you jump on the first button you see that an item will appear for the player and if you push that second a button an enemy might appear or whatever. You will also need to use logic to connect these things, such as something happening when you hit a checkpoint in a race or whatever. There are a whole bunch of items that can be interconnected and you can make a truly amazing play set if you really want to dive deep.

To accomplish some of the things in the game you are also going to need a new sidekick. It is new this year for Disney Infinity 3.0 and this sidekick can definitely help you out. You have to take care of him by equipping him with weapons and armor, feeding him if he/she is hungry, leveling up their stats and more. They can be really nice to have in a battle with a lot of enemies and the A.I. for the sidekick seems to work really well. I chose to use Darkwing Duck as my sidekick most of the time and enjoyed watching him “grow” as I leveled him up and as we waged war together. There were also times when I was in the Toy Box where I would have Darkwing tend to some crops so food could be grown so that I could feed him and the other sidekicks. The different items that you earn for your sidekicks will give you different benefits. If you choose to have one of them wear a medic hat, for example, then when you pick them up they can replenish your health. 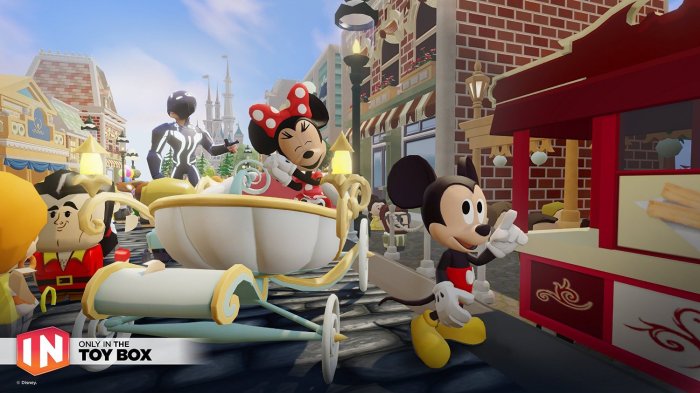 As you run around the different worlds doing quests and exploring you will collect different colored shards. The blue ones are essentially the game’s currency which you can use to buy toys for your Toy Box. This is where you can buy a number of different items from your favorite franchises to build whatever you want. There are Tatooine Tusken Raider Huts that you can buy, Agrabah Palace pieces, the entrance gate from the Monsters University School of Scaring and much. You can mix and match your different franchises and create something that is totally unique and something that you might not see otherwise.

Disney Infinity 3.0 is a really fun game to play. It has its share of technical problems though. While the Star Wars campaign runs great the same can’t always be said about the Toy Box. There were times when the framerate would take a significant dip and on two occasions I had to completely exit out of the game to fix it. Every now and then the audio drops out for a few moments. Then there is the online portion of the game that you can find in Flynn’s arcade. The problem here is that the online is completely broken as of the time I am writing this review. There are a number of games available to play online but every single time I tried to do that I would either immediately get a “search failed” message or I would have to wait 20 minutes to get paired up with someone and after another 10 or so minutes we would get kicked out all together. I’m not exaggerating there either. I kept my eye on the clock while repeatedly trying to access the multiplayer and it would never work. My hope is that Disney releases a patch soon to fix the broken online multiplayer. Apart from the obvious frustration of not having this segment of the work properly there are also achievements tied to the online multiplayer which are damn near impossible to get right now. It feels like the game was rushed a bit before it was fully ready to be out. The other nasty thing that I ran into a lot was inexcusable loading times. When I would go from the Toy Box into the Arcade, for example, the loading times were pretty good. Going back into the Toy Box though is a different story entirely. There were at least a couple of times where I legitimately almost dozed off waiting for everything to load. There is absolutely no reason for that especially given the fact that the entire game is on my hard drive and not streaming off of a disc.

Overall Disney Infinity 3.0 is a really fun game. Technical issues aside, I enjoyed my time with the game going through the Star Wars campaign, customizing worlds to how I liked them, meeting new sidekicks and more. It definitely is a lot of fun and if Disney can release a patch or two to fix the issues I mentioned then this good game could definitely become a great game. If you are a Disney Infinity fan and/or a Star Wars fan I would definitely pick this up. You can go through the game with everything you get in the starter pack but keep in mind that if you want to do absolutely everything in the game you are going to have to buy some additional characters.