Saints Row: Gat Out of Hell is a lot of fun to play. You have some new powers, a new “city” to explore and some variations on popular Saints Row minigames. There isn’t much in the way of a story though so if you are looking for a big addition to the Saints Row IV story then you might be disappointed. With that said Gat Out of Hell picks up right after the ending to Saints Row IV with everyone attending a party. A couple of events transpire and then a vortex opens up sucking the boss into Hell and then both Johnny Gat and Kinzie follow to try and rescue him. Much like Saints Row IV, Gat Out of Hell also features some co-op action so that you can have some fun with your friends as well.

If you have played Saints Row IV then you will be right home in Gat Out of Hell. Everything plays the same and during gameplay the game feels like an extension of Saints Row IV. Of course with this being an expansion pack that is exactly how it should feel. There are some interesting new weapons to have some fun with though. For melee purposes there is the “Omega Omega Omega” which is used for hazing and is a spiked, flaming paddle. The other weapon available for melee purposes is Gods Hammer which is basically a giant hammer that you can use. Moving over to pistols you have your standard pistol but also the “energy caster” where you can fire sizzling energy bolts from a hand crossbow as well as the Gallows Dodger where you can hurl arcane balls of energy from a talking gun. Other weapons include the Exodus 10 where you can fire a stream of homing blood sucking insects at your opponents as well as the “Armchair-A-Geddon” which is where you can sit in a recliner that you can drive that is equipped with dual miniguns and heat-seeking missiles. Whenever I had a large group of enemies to fight this weapon was definitely one of my favorites as it would allow me to take out enemies quickly and comfortably as Gat just sat back in the recliner. Unlike other Saints Row titles you won’t buy your weapons at a shop. Since you are in Hell you simply go to the “Sinterpol Armory” which are essentially vending machines strewn about the city. You can also upgrade your weapons such as getting a bigger clip size, increasing damage, getting a “special power” for that weapon and more. In general you can cause a whole lot of destruction in Gat Out of Hell and have a lot of fun doing it. 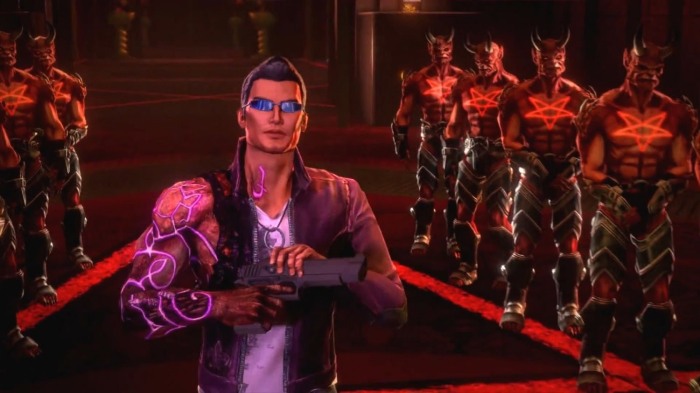 The story in Gat Out of Hell is pretty short and doesn’t feature very many of your traditional missions. In total there are 12 missions with most missions having multiple objectives. They aren’t anything outstanding though. One of these missions is to purchase or upgrade a weapon. Then you have five loyalty missions for five people that you run into in Hell and there are some people you will see from earlier Saints Row games. Another mission is you having to charge something and by doing that you have to collect four different powers. It is all very basic which is disappointing. I will say though that the Saints Row humor is still alive and well and you’ll even hear someone make a snarky comment about how there aren’t any standard missions here like you would find in the other games. I always enjoy when a company can make fun of themselves.

Even though there aren’t many story related missions there are over a hundred challenges which should keep you busy for a little while if you are a completionist who likes to do everything. There are hundreds of collectibles to find in the world and while you can unlock a feature where they will show up in your mini map, they don’t show up in your world map which causes some problems and headaches for those who want to find everything. Saints Row IV had over 1,200 data clusters to find while Gat Out of Hell only has 940 but there are things to find as well such as commentaries by both Gat and Kinzie as well as tomes from all of the different characters.

The mini games have returned to Gat Out of Hell with a devilish twist. In Saints Row IV there was a mini-game where you had to race through the streets and up buildings and hit different checkpoints along the way. Gat Out of Hell has something similar, only instead of racing through the streets you are flying with your new wings. In previous iterations of Saints Row there was also an insurance fraud mini-game where you tried to rack up as many injuries as you could to your player and you had goals to reach such as hitting a million dollars, for example. In this game there is “Torment Fraud” which is the same concept but instead of trying to rack up a medical bill you are trying to reduce someone’s sentence in hell. The gold tier goal for one of the early ones is to be bounced around enough to where you knock 600,000 years off of someone’s sentence. Other mini-games from Saints Row IV are also here as well with clever little twists as I have described above.

By doing these missions and completing the challenges you will earn some arcane points that you can use to upgrade your powers. You can upgrade your super sprint ability so that it doesn’t use any stamina, upgrade your summons ability so that you can remotely detonate imps that you have called forth to fight alongside you, upgrade your stomp ability to increase the range and stun time and much more. There are four active powers as well as two passive powers that you can upgrade and they will definitely help you out in battle, especially if your notoriety level is high and you are getting swarmed by enemies. There are also various other upgrades to your character such as increasing your health, different bonuses such as getting 10% extra XP for missions, different abilities such as a stamina increase and more. My favorites were the weapon upgrades though. By the time I was at the end of the game I had completely upgraded my shotgun and not only did I have infinite ammo at that point, I had unlocked instant reload as well. That definitely helped me out of some difficult situations. 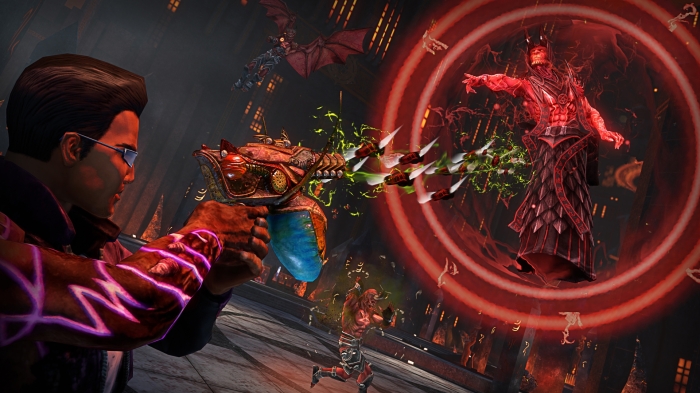 Saints Row: Gat Out of Hell is a fun game to play. I do wish there was some more story structure but then again it is an expansion pack and not a full fledged game. The twists on the different mini-games were fun to play as was being able to fly around the city, as opposed to just being able to glide in Saints Row IV. Once you go through the final battle you are presented with five different potential endings and I will be very interested to see if any of them turn out to be canon in the next game. Overall if you are a Saints Row IV fan then you should definitely give Gat Out of Hell a try. It is more of Saints Row IV with some different twists and that is a good thing.