In Citizens of Earth you start out the game having just won an election and becoming the Vice President of the World. You want to enjoy the moment but duty calls and it isn’t long before you figure out that something weird is going on in town. For starters there are a bunch of protesters in your home town being lead by the Opposition Leader. Then you have a coffee shop that has a “special blend” that seems to be pretty addictive to the town’s residents. At one point a building even uproots itself and flies away so you know something fishy is going on. Citizens of Earth is an old school western made j-rpg which is both good and bad. It has some really interesting ideas but the game can be maddeningly obtuse. There are going to be a lot of players who get frustrated with the lack of direction this game gives you and will just move on to the next game. On the other hand there will be those who like this type of experience as it does somewhat harken back to the days before a lot of games held your hand.

As I mentioned before you are the Vice President of the World and one of the things you will need to do throughout the game is recruit people to your party. This is usually done by performing side quests. In one instance there as a cars salesman I needed to join my party so I needed to beat him in a race. There was a police officer that I needed to join my party but I first needed to help solve a couple of mysteries around town and, well, you get the idea. There are a total of 40 citizens throughout the game that you can potentially recruit and you even get a trophy for recruiting all 40 of them. As the Vice President of the World you can simply order these people to do what you want. In battle, for example, the Vice President stays on the sidelines and instructs his followers on what to do. He keeps talking about how you need to protect him. Like any other RPG you will level up as you go along but unfortunately the people you have recruited that aren’t in your fighting party don’t seem to level up. 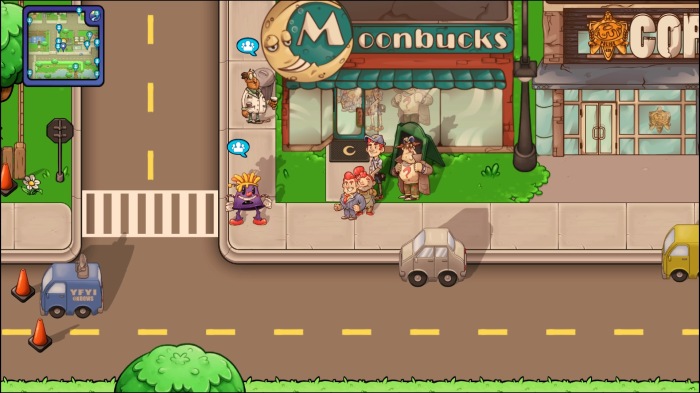 The map system in this game is a bit broken however. There were many, many times when I would consult the map to see where I needed to go next but was either given no clue where to go or there appeared like there was something there only to find out there was nothing when I got to that location. If you forgot what your current objective was you could check your agenda but that didn’t help all that much as it would simply say something like “Discover the whereabouts of Moonbucks.” Fortunately once I recruited the car salesman and helicopter pilot to my party I could have a quick way to get around the world but it doesn’t help all that much if you don’t really know where you are supposed to be going.

With all of that said there are some positives about Citizens of Earth. I found the humor to be really good. It is tongue-in-cheek satire with a number of pop culture references. The recruits themselves are also stereotypes such as the crazy conspiracy nut, the nerdy programmer, the yoga instructor and more. You should get a chuckle out of those characters and their catchphrases, at least the first few times you hear them. I enjoyed the give and take of the battle system as well. You have to strategize as some of the more powerful attacks will use an orb of energy and you don’t have many to begin with. It is really easy to get more orbs but this makes it so you can’t just spam the more powerful attacks all of the time. There are other ways to gain experience in the game as well besides fighting. Just exploring the environment with your party can net you a decent amount of XP. Look at a bookshelf in a building, or check out a painting you see on a wall and you will most likely earn some points. If you walk by something and you see the magnifying glass symbol that means it can be investigated. Of course some time has to pass before you can investigate that area again or gamers would simply pick one spot and spam the system to get their character stats maxed out. I enjoyed the art style as well as it is very cartoon-y and you can tell the game’s inspirations are from the 16 bit era.

Citizens of Earth is a mixed bag for me. It has some great humor, some of your typical stereotypes that gave me a chuckle and a battle system that I enjoyed. On the flip side it can be maddeningly obtuse at times, the map is almost completely useless and it feels like there are some quests put in the game for no other reason than to pat the time it will take to finish everything. If you enjoy old school role playing games then you might want to give this game a try and see what you think. Citizens of Earth is a lighthearted adventure where you as the Vice President of the World need to save the world…it just would have been nice if there weren’t some parts that made it frustrating to do so.