Ah, memories. Ten years ago we were introduced to Master Chief, Cortana and the Halo universe in general. I’m sure the development team over at Bungie could never have imagined how big and how important the Halo franchise would become. Now, ten years later, we have a chance to revisit the title that started it all with Halo: Combat Evolved Anniversary. Everything that you know and love from the original title is here in beautiful high definition detail. It is amazing to see how Halo was back in 2001 and how it looks now in 2011 with the updated visuals. I think this is the first title that allows you to switch between the original graphics and the high definition graphics on the fly. There were moments where I would marvel at how nice the game looked and then switched back to see what it looked like in 2001. It is remarkable how far the industry has come in ten years and you can see the graphical tricks that they had to use back then. There was clearly a lot of work put into this remake and it can’t be understated how much of an amazing job that 343 Industries did in bringing this title (specifically the campaign) to the Xbox 360.

As soon as I started up Halo I was hit with an instant wave of nostalgia as I was treated to the iconic soundtrack and brand new cinematic opening to the game. After that I dove in to the campaign and it all started to come back to me. The Pillar of Autumn looked amazing and I kept switching back and forth between the graphical engines to compare then and now. The gameplay still feels really nice and the AI still works pretty well although there are some instances where you can tell it is a ten year old title. Everyone should know the story by now so I really won’t get into it. The actual campaign is the same and you will still have the problems you did when the first game released. You’ll still have to go through the library level (also known as the “copy-paste” level) and the controls of the warthog are still a little bothersome. Unlike the original release you can go through this campaign with a friend utilizing the co op feature over Xbox Live. You can only play with one other friend though as opposed to being able to play with three friends on other Halo titles. That might be a good thing though because there was a serious amount of lag when I was trying to play with one friend. The development team over at 343 need to figure that out as I don’t remember any of Bungie’s titles having any lag like that. One thing they did add to the campaign was the Terminals. Each level in the campaign has at least one terminal and this is how you will get some more of the Halo backstory that you didn’t find in the original Halo title back in 2001. The backstory is told through all new cinematics and helps shed light on the Guilty Spark and much more. I thought it was a great way to introduce new players to the Halo franchise while at the same time giving veterans some new material they haven’t seen before. 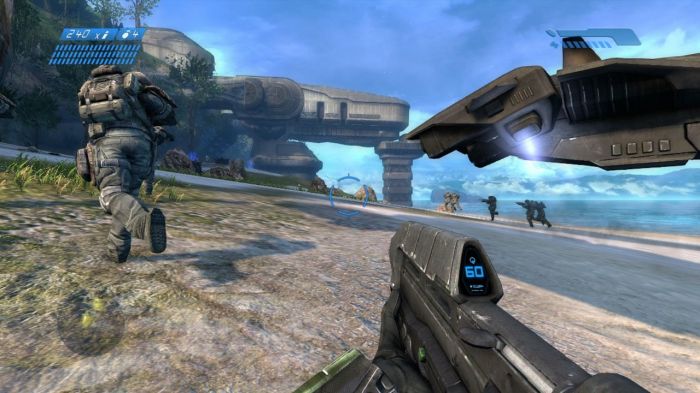 Another new edition to Halo is the use of Kinect. Utilizing Kinect you can give some verbal commands and the game will respond accordingly. You can say “reload” and Master Chief will reload his weapon, “grenade” to get him to throw a grenade and, well, you get the point. This works surprisingly well as Kinect picked up my voice commands with ease. While all of that is pretty cool one of the main things I utilized Kinect for was scanning the environment for information. After I take out an enemy I can say “analyze” and things that are able to be scanned get highlighted. Once I scan something it goes into the library where I can get more information on the subject. One of the enemies that I scanned was an Elite Minor and the library gave me all of his statistics as well as a little bit of backstory about them. You can also rotate the character around so that you can get a good luck at his armor and anything else that you want to. Fans of the Halo lore should get a real kick out of getting to know the Covenant and other things a little better. You can even use Kinect at the Terminals when you are watching the cinematics by telling it to rewind, pause, exit or resume play. I was surprised by how well it worked and while it is definitely not a necessity to enjoy the Halo experience it is a pretty cool extra feature.

Once you get done with the campaign you can jump into something that Halo is most known for: it’s multiplayer experience. The multiplayer is running off of the Reach engine and instead of making a true remake of the original Halo maps, this is more of a “best of” set of maps. The multiplayer is pretty much a Halo: Reach map pack and, if you haven’t purchased Halo: Combat Evolved Anniversary, you can even buy these maps for use in Reach for 1,200 Microsoft points. When you are playing the multiplayer Xbox Live even shows that you are playing Reach. Halo: Reach is an amazing game however there will be a bunch of people disappointed that the multiplayer portion didn’t get the same kind of love that the campaign did. With that being the case the Anniversary maps don’t look as good as the campaign either.

Halo: Combat Evolved Anniversary is a fun title. The development team took great care with the campaign and it shows. It looks absolutely stunning and is a blast to play. It might not look as good as some of the new shooters that have recently hit the market but it looks good nonetheless. The core game is still the same though which means any of the quirks that Halo: Combat Evolved had will be present in this version as well. Some die-hard Halo fans will love that fact and others will be annoyed. It just depends on your preference and whether you can come to terms with the fact that the original material was made ten years ago. You’ll even get achievements now and you can add it to your career in Halo Waypoint. If you want to get this game for the multiplayer then just play Halo: Reach and buy the map pack. If, however, you want to revisit the campaign (or play it for the first time) than this is a great way to do it. It is always fun to play as Master Chief and Halo: Combat Evolved Anniversary is a good way to spend some of your gaming time until Halo 4 hits next year.