Soccer returns to the street today with EA Sport’s latest title, FIFA Street. It has been a few years since we last saw a FIFA Street title and with this reboot comes some upgrades along with what has always made this a fun series. For starters, FIFA Street utilizes the FIFA gameplay engine which includes the Player Impact Engine and Precision Dribbling. Street Ball Control is also introduced as well as new tricks that allow you to move the ball down the field with style. You have World Tour Mode where you can create a player, pick a country of origin and much more as you embark on the road to glory. If online is more your speed then you can participate in online seasons with your friends. FIFA Street is all about having fun while playing the world’s most popular sport and looking good while doing it.

My FIFA Street experience began with the World Tour mode. This is essentially the career mode of the game. Your career begins in your country of origin and after you prove that you have what it takes to compete locally you begin touring the world in search of a championship. At the beginning of your career you will be able to utilize abilities such as street ball control, step overs, flick ups, neck stalls and more. As you progress in your career you will be able to unlock more advanced skills and attributes and really build your team up as a contender on the world stage. With me being from the western part of the United States that is where I began my career and I was greeted with four events to go through with various challenges. I had to play a game in Denver where the first to five goals was the winner and then go up to Seattle for a 4 v 4 match and finally end up in Salt Lake City for a 2 v 2 Panna match up. Once I got through those stages I then headed to Los Angeles for the 5 v 5 stage finals. Your progress is also shared through the “Street Network” so I was able to see how my friends were progressing and how far ahead of me they were. It should also be noted that your World Tour squad can be used both offline and online to continue to grow your players. 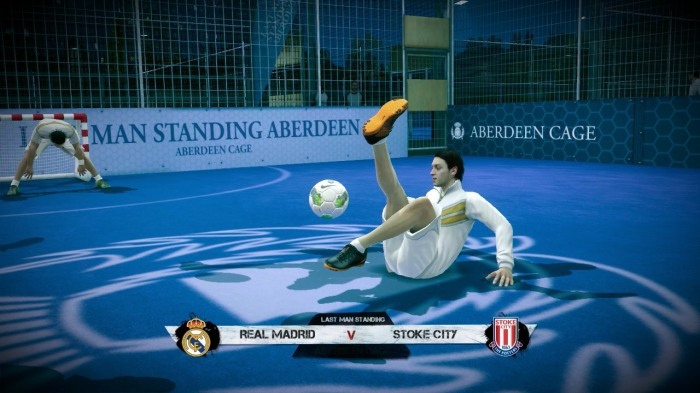 If you are like me and you really aren’t that good at soccer titles there is also a practice arena where you can get used to the controls. This is just you one on one with a goalie and is a great chance to fool around with the controls and see what kind of tricks you can pull off. Spending a little bit of time here definitely helped me out so I didn’t go into my career not knowing how to play. There is also, of course, an exhibition mode so if you aren’t quite ready for prime time you can hone your skills and see what strategy works best for you. This is also where you can become familiar with playing under different conditions and in different environments. The environments that you will play in are representative of the area. There were times where I was playing on a nice traditional soccer field and then other times where I was playing in a parking lot. The different choices in exhibition mode go from a standard 5 v 5 match, to Last Man Standing, Futsal and Panna rules. The Last Man Standing mode is an interesting concept where when you score a goal you lose a man. The point of this mode is trying to be the first team to lose all of their players by outscoring your opponents. Interestingly enough there are no goalies in this mode so it definitely adds a bit of strategy to the mix as you don’t necessarily want to make a mad dash to your opponent’s goal because you will leave yours wide open in the process. Futsal is simply 5 v 5 and played in stadium or arena environmenst. The catch here is that there are no walls so you won’t be able to get any rebounds or anything of that nature. Panna Rules work on a different point system where each Panna is worth three points, each Air Beat is worth two points and each beat is worth one point. As you perform these tricks on the field you will bank the points. Once you score then you will acquire all of the points that you banked by doing those tricks. If the other team scores first though then you will lose all of your banked points. This is a mode where you never know what is going to happen as you could be dominating the scoreboard until your opponent pulls off some nice tricks and scores on you and then it immediately becomes a much closer game. It is a nice change of pace and definitely adds some variety to the game.

If you are the type of gamer who loves to play against others online then EA has you covered here as well. There is a Street Season where you can play against other users in 10 game seasons and, if you earn enough points, your team will get promoted to a higher division. There is also online team play where you can play in a game with up to seven other users. Of course you have the standard online exhibition matches too. In my opinion Street Season will probably be what most people play and EA has brought the infrastructure from FIFA 12 for these head to head online sessions. Additionally, as is the case with every sports game, licensed content is a big deal and this game features stars from some of the top clubs in the world such as Real Madrid, Manchester United, Barcelona and many more. You can play as Kaka, Rooney and many of your other favorite players who are decked out in authentic kits, training gear and street gear. There is also the EA Sports Football Club where you will be contributing to your EA Sports Football Club identity.

Looking at this game I don’t have very many complaints. The game does have an online pass which I know some people don’t like. Every once in a while I would run in to some weird AI glitches where it didn’t seem like they were aggressive enough. On the other hand there were a few instances where my goal keeper simply stepped aside and let the opposing team score. That only happened to me a couple times but it was definitely a weird occurrence. If you are one of those gamers who like to button mash you might want to rethink your strategy on this game. There were a few times where my guy would seem to kick the ball for no reason until I realized that I had been button mashing for a couple of seconds and the game just took a few seconds to get caught up. At least that is what I assumed was going on. It really didn’t happen that often and by no means affects the overall quality of the game. It was just weird to see on the rare occasions that it did happen.

Unlike the more serious FIFA titles, the “Street” franchise is much more over the top and relaxed. The soundtrack for the game is pretty awesome as it features various groups like Skittles, Fat Boy Slim, The Beekeepers and much more. As I have mentioned before FIFA Street brings with it the notion of Street Ball Control. This allows you to engage with another player in a one on one battle as you perform tricks to try and lure your opponent to make the first move and then shoot past him as he takes the bait. You can modify different tricks with a flick of the analog stick or by holding down the trigger and bumper buttons. You also have the street dribble which gives you better control over the ball and, if you pull it off successfully, can put you in a better position to score. There are a whole bunch of skill moves to be learned with over 50 of them in the game for you to master which could very well be the difference between victory and defeat. If you get really good there are also aerial skills you can do by juggling the ball, faking out a defender or flipping the ball over their heads.

Overall FIFA Street is a fantastic title for those who are looking to get their soccer fix. If you have enjoyed previous “Street” titles then you should have a lot of fun with this one as well. If you aren’t traditionally a fan of these types of games then I would recommend downloading the demo first to see what you think. I had a lot of fun going through some of the world tour and then taking my skills online to see how I fared against others. Even though I didn’t do that well I had a lot of fun playing and I did get in my fair shot of goals. This is going to be one of those titles that is easy to play but hard to master. I look forward to honing my skills though as the development team has done a remarkable job here and I look forward to seeing everyone on the field.