Baseball season is almost upon us and that means that the annual baseball titles have also hit the market. 2K Sports has just released their offering to the market with MLB 2K12 to mixed results. During my time with this game I thought that it felt an awful lot like 2K11 with slight improvements in certain areas. There are a couple of nice additions while simultaneously also having some of the same problems the series has had for years now.

One of the new additions for MLB 2K12 that immediately caught my attention was the MLB Today Season Mode. This is a new feature that lets you complete an entire season at the same pace as your favorite baseball team. By utilizing the MLB Today engine you can now track your stats and compare how you are doing in the game to how your team is doing in real life. You go through your team’s real schedule and play one game a day. Assuming that you make it all the way to the World Series in this mode that means you won’t make it all the way through until October when the actual World Series is taking place. That does raise an interesting question though. Once the season is over and the champions are crowned, what happens to this mode then? Do you get a chance to replay the season or does this mode become obsolete once the season ends? Those questions aside this is a mode that hardcore baseball fans should really enjoy. Being able to follow your team step by step and compare notes is a pretty awesome idea and one I would love to see implemented in other sports titles. 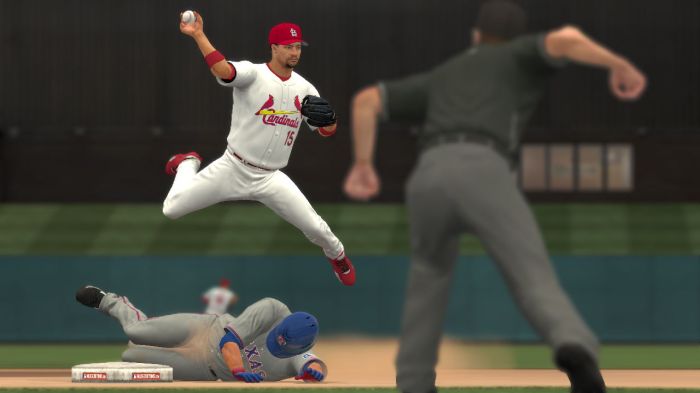 With all of that being said the majority of MLB 2K12 is really iterative. For the most part everything that you saw in last year’s baseball title has returned in some fashion. There are a few items that have been changed though such as the revamped throwing system. With this new throwing system you have a meter to work off of. By holding down the button a small meter will appear and you need to try and let go of the button when the needle is in the green. This will insure an accurate throw to your target. If you happen to land in the yellow then your throw will most likely reach its target but it might not be as accurate as it can be. Then, of course, if you happen to land in the red you run the risk of having a wild throw and the opposition trying what should have been a routine play into a big advantage. You can begin to queue up throws as your player runs to the ball but the area for the sweet spot will be harder to hit then if you were standing still with your feet firmly planted on the ground. MLB 2K12 also features over 80 hours of new commentary tracks from Gary Thorne, Steve Phillips & John Kruk. Within the MLB Today mode the commentary is dynamic and will update as the game unfolds.

The “My Player” mode has also returned this year with some changes. Depending on the role that you select (pitcher, catcher, first baseman, etc…) you will be proficient in some areas and decidedly less so in others. The skill system is also a bit more realistic this year with the attribute regression feature. In this year’s version it is important to keep an eye on your progress and make sure to consistently work on your core attributes or they will start to regress over time. I chose to be a pitcher so that is all that I did during games. Once I retired the side and it was my team’s turn to bat I would simply simulate that part and immediately go back to pitching. As a pitcher I was given certain goals to complete throughout the game. These goals differed depending on the situation that I was in. Some of the more common goals I came across was to get a first pitch strike, strike out the batter and prevent the runners on base from getting in a scoring position. If you successfully achieve these goals then you will acquire skill points whereas if you don’t then you don’t get anything. Once you are done with the game you are given the opportunity to spend the skill points as you see fit as you try to level up your player’s abilities. The items that I tended to focus on first were controlling the ball better and then the overall speed of my pitches. If you are someone who really likes stats and building up your player as you see fit then you should definitely have some fun in this mode. As far as online play is concerned I didn’t really encounter any significant problems. Overall it performs fairly well, however, it does experience some of the same problems that I mentioned above. In terms of online latency I didn’t really notice any of it and every game that I participated in was playable.

Unfortunately MLB 2K12 also brought along with it some of the problems that its predecessors brought to the table. The frame rate in MLB 2K12 is not always solid which tended to mess with my game a bit when it happened. Every once in a while there seemed to be a strange hitch almost as if the frame rate couldn’t really keep up at those times. The player animations at times were also really bad. There were instances when this actually affected my game. There was one occurrence where the opposition was on first base and the batter hit it to my second baseman. This should be an easy double play, right? Well my players got stuck in their animation and turned what should have been an easy play into an exercise in frustration. I was able to get the runner out at second base however the batter got to first base because the second baseman didn’t go through his animations quick enough to get the ball over there. I will say that this didn’t happen every time, however, when it did happen, it was incredibly frustrating. If I was in a really close game it could also mean the difference between victory and defeat. There were other instances too on the other side of the ball. If I hit a ball down the foul line and tried to turn a single into a double it didn’t always work out that way. Even though I pressed the button to run to second base there were times where my runner would remain standing on first for whatever reason and then a few moments later begin running to second base. It is almost as if the game couldn’t keep up with what I wanted to do and because of it the frame rate and/or animation suffered. Of course, as baseball fans know, every second counts and there were definitely multiple occasions when these technical problems would cost me an out that should have never happened. There were some graphical and detection issues as well as there were times where my batter would try and tap the ground with the bat but the bat would go through the ground. After an inning there were times when the camera would go haywire and focus on a dugout or the crowd sitting behind the dugout instead of the players on the field like it did most of the time.

There really isn’t much more to say about MLB 2K12. It is basically last year’s version of the game albeit with a few minor improvements. The one thing that stood out for me was the MLB Today mode which was definitely a great idea. Being able to follow your team and play their schedule as it is happening in the real world is a great concept and one I hope that other sports titles will emulate. At the end of the day this game still has its share of issues that really should have been fixed by now. A lot of that is because there has to be a game released every year and there isn’t really any time to make some much needed changes. While I know it would never happen I would love to see what a development could do if they were allowed to take two to three years to really nail and innovate in a baseball title. Sadly that isn’t going to happen and if this turns out to be 2K’s last baseball title then it is a shame they couldn’t go out on a higher note.