Mortal Kombat has finally returned to gaming consoles and it has returned with a vengeance. This version of Mortal Kombat serves as somewhat of a reboot for the series and brings it back to its violent roots. The development team promised that it would return this franchise to its former glory and they have succeeded in almost all counts. Mortal Kombat is not your standard fighting game. You, of course, have your classic Mortal Kombat with Ladder mode as you work your way up the “ladder” until you get to Shao Kahn. There is an all new story mode that explains the origins of some of your favorite characters as well as a challenge tower where you have 300 separate challenges to complete. Even the training mode has been fully realized as you have the standard tutorial and practice mode as well as something else fans have been wanting, a Fatality tutorial. Yes, now you can perform Fatalities as much as you want and you don’t even have to fight anyone. Simply pick the character that you want and it will tell you where to stand and what buttons to push. This is a great mode for someone who just wants to jump in and see how creative NetherRealm Studios got with the fatalities or if they want to show something off quickly to a friend. Of course, there is the standard multiplayer options and some extras that fans of the series should really enjoy.

As I mentioned above, the “ladder” system makes its return and old school fans of Mortal Kombat should immediately knows how this works. You pick your fighter and then work your way up the “ladder” with each fight getting progressively harder until you get to the head honcho, Shao Kahn. You can do solo or use the new tag option to control two different characters. If you pick Sub Zero and Scorpion and Sub Zero is running low on health you can simply swap him out for Scorpion in the tag mode. Fighting game fans will undoubtedly recognize this mechanic from other fighting titles. The Mortal Kombat mini games have also returned with “test your luck,” “test your might,” “test your sight” and “test your strike”. Test your luck involves you using a slot machine to not only figure out who your opponent is going to be but to also figure out the stipulations of the fight (i.e. X-Rays disabled). “Test your Might” is a bit of a button masher where you have to build up your strength and then hit the triggers at the correct moment to have your fighter successfully break through a solid object with his bare hands. This particular mini game goes all the way back to the original Mortal Kombat so long times fans should be happy to see it return. “Test your Sight” is one of those game where you have three cups and you put a ball into one of those cups and try to guess which one it is in after they have been moved around. For “Test your Might” you have to button mash to increase your strength and keep it within a specific range until the meter is charged. Once the meter is charged you hit the trigger buttons and, if you did it correctly, your fighter should break the appropriate item.

After you go through those modes you come across the story mode. Fighting games have never really been known for having great stories. Mortal Kombat is trying to change that though with a well told story that seamlessly integrates what this franchise is known for, brutal fighting. The story is a bit of a prequel as it reveals the origins of a lot of the different characters. You’ll find out some of the history of the Lin Kuei, how Jax lost his arms and had to get the implants and more. I don’t want to spoil any of the story for anyone but long time fans of the series will appreciate the tiny details and the amount of work that NeatherRealm Studios put in to make this one of the best story modes ever in a fighting game. The way that they keep the story flowing as you slowly make your way through the Mortal Kombat roster was done beautifully. There are also quite a few nods to the first Mortal Kombat movie which I appreciated as well.

When you want to take a break from the story mode there is also the “Challenge Tower” mode for you to explore. This mode features 300 unique challenges for you to complete. Challenges range from simply defeating your opponent to playing a mini game and more. Some of the more difficult challenges tend to be when they try to handicap your character in some way giving the computer controlled AI the advantage. One of the harder challenges for me was when my fighter would become “stunned” if I took too damage and then there would be a short amount of time where the button layout was randomized. The kick button would all of a sudden throw punches and different things like that, which would make it hard to sustain any offense during that brief time period. Combine that with the brand new x-ray moves and I found myself in a world of hurt on more than one occasion. For those who might not be familiar with the new x-ray moves, well, it is pretty much like it sounds. When you perform one of these maneuvers you see your opponent’s x-ray so that you can see every bone and organ break as you punch them in the stomach or snap their neck back. It looks pretty vicious and can help turn the tide in any battle if you can successfully perform the maneuver.

As you play Mortal Kombat and as you go through all of these different modes you will earn koins. Koins are the in game currency that you use to unlock items in the Krypt. The Krypt has hundreds of items for you to unlock so if you are someone that wants to unlock everything, this will keep you busy for a while. There are four different areas within the Krypt to unlock items with the Deadlands, Bloodmarsh, Meadow of Despair and Hollow of Infestation. The map will also tell you how many items you have unlocked in an area so you never have to guess whether you have found everything in one specific area. There are a variety of things that you can unlock here such as concept art, alternate costumes, extra fatalities and more. Once you have spent all of your koins unlocking various items you will then need to visit the Nekropolis. This is where you get to look at all of your hard earned treasures. You can look at character art, environment art, design concepts and listen to the pieces of the soundtrack that are unlocked. Each fighter also has a chamber in here and if you unlock something in the Krypt for a specific fighter, you need to visit them to get access to that item. For example, if I unlock an alternate costume in the Krypt for Kitana, then I need to visit Kitana in the Nekropolis to be able to use that costume. This is also where you can look at your stats with each individual character as well as looking at a character’s bio. Doing this will allow you to look at the 3D model of each individual character and it will let you control the camera so you can zoom in and out on a character to get a better look than you might get during a fight. Additionally, their bio is here as well that briefly summarizes each fighter’s history.

In addition to everything that I have mentioned above, there is also the multiplayer portion of this title. You can play with up to four different people in versus mode or go online and play against your friends. You have your standard “ranked” and “player” matches here as well as the ability to create private matches and/or rooms. You can check your stats at any time, including your position on the leaderboards. There are three different fighting modes here with “1v1”, “Tag” and “King of the Hill”. The first two modes are self explanatory and “King of the Hill” is a cool concept where the developers tried to create the arcade atmosphere. You have two people fighting and then everyone else is waiting for their turn. The winner keeps playing and the loser goes to the back of the line. While you are waiting for your fight you can spectate the fight that is going on in a virtual movie theater with your Avatar. After the match everyone gets to rate the winner and/or match on a scale of 1 to 10 and then your avatar will hold up whatever number you picked for everyone to see. This is a really fun multiplayer mode and it will be a lot more fun once Warner Bros releases an update to fix the multiplayer. During my time playing the multiplayer I noticed some matches that had significant lag and it would get worse with each person that joined in the fray in the “King of the Hill” mode. This is my only complaint with the game. If Warner Bros can release an update that fixes the lag in the online multiplayer then they could have a damn near perfect fighting game here. 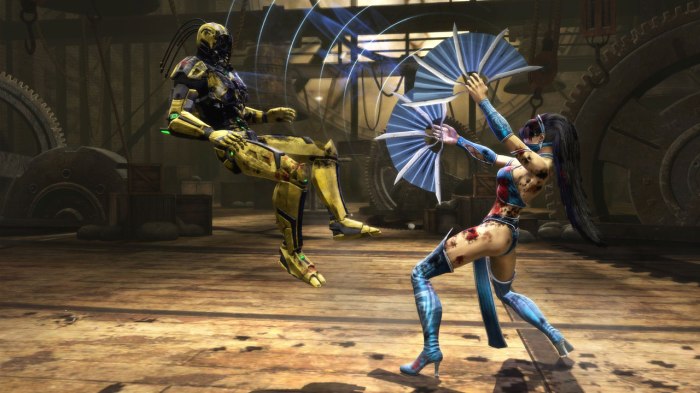 Overall, Mortal Kombat is an incredible fighting game. It is by far the best fighting title that I have played in a long time and everyone over at NetherRealm should be proud of this game. This is a title that will keep me busy for quite a while and this is the title that Mortal Kombat fans have been clamoring to get their hands on for years. This is the definitive Mortal Kombat game and a return to form for one of the most popular fighting franchises out there. As I said above, once the online issues get solved then this will be a damn near perfect fighting game. If you are a fan of fighting titles at all you owe it to yourself to play this game. This is a title that deserves a spot in your gaming library. The amount of detail that was put into this game is astounding and it is also, graphically speaking, one of the most beautiful fighters out there. Be sure not to miss out on this round of Mortal Kombat.