Conduit 2 was recently released on the Wii and it picks up right where the original left off. For those who aren’t familiar with the Conduit series it is a FPS series for the “hardcore” that is also a Wii exclusive. You assume the role of Michael Ford and you are trying to chase down John Adams. You will chase Adams all over the globe from Washington D.C., Sibera, China and even to the center of the earth. The story throughout the game is pretty cool (especially if you are aware of the story from the original Conduit title) and, once you beat the game, you get the feeling that we haven’t seen the last of this franchise from Sega. You have a couple of allies that will help out along your journey and something called the All Seeing Eye (ASE). This allows you to hack into a variety of objects, including locked doors that might be blocking your path. The length of the campaign is standard FPS length and there is a multiplayer section as well.

When you first boot up Conduit 2 and go into the options you will notice that there are three different control options for this title. You can choose to play this title “normally” and just use the Wii Remote and the nunchuk. The second option is to use the Wii Remote and nunchuk along with Wii Motion Plus for even greater accuracy. The third option is that you can use a Classic Controller or a Classic Controller Pro, just in case you want to play this shooter in the “traditional”fashion. I applaud the developers for giving the players these choices as it ensures that everyone is happy and can concentrate on enjoying the story. There are a number of weapons at your disposal ranging from the standard pistol and shotguns all the way to the Deatomizer Mk4 and the Warp Pistol. Ammunition in the game is spread out pretty well so as long as you are paying attention to your surroundings you shouldn’t ever be caught in a troublesome situation with no ammunition. The ASE is also a very important tool that you will use throughout your adventure as you hack into things and scan different objects. You can even locate different objects to scan by having the ASE emit an audible “ping”. As you progress in the game you will come across certain enemies that can turn invisible which definitely adds another layer of challenge to the combat. Utilizing the ASE you can make these invisible enemies glow brightly, however, it should be said that you can’t fire your weapons while using the ASE. 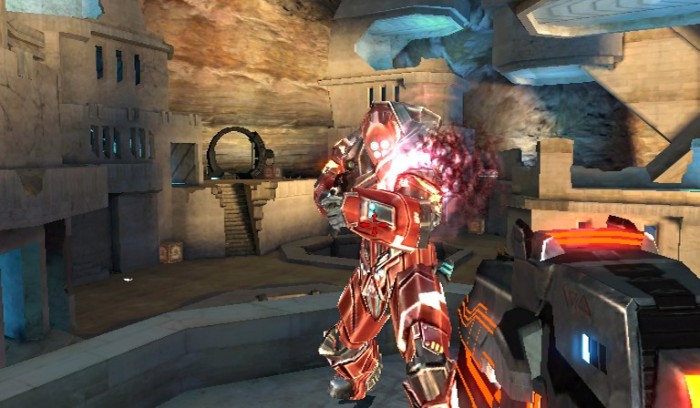 There really isn’t much in the way of boss fights in this game and that is a shame. I had a lot of fun with the boss fights that were there and I would have liked some more. I didn’t find the bosses to be “cheap” or anything like that and I enjoyed the encounters. The checkpoint system seemed to work pretty well as I never really had to make up too much ground whenever I got taken out and had to respawn. As you progress through the game you will periodically return to Atlantis, which is your central hub. This is where you can control the destination that the Conduit will take you to, allowing you to replay a level if you so desire. There is also the Arsenal Replicator which allows you to build any weapon you want, as long as you have the blueprint for it. I thought the voice acting was decent and I really enjoyed the writing. There are quite a few jokes throughout the game that “hardcore” gamers will definitely enjoy. There was one specifically that I really liked where I went down one hallway and then the next hallway was identical to the first one. My character than made a comment about having deja vu and one of my allies explained to me that, in order to save money, people often have similar designs within a structure so as to save money on continually developing something new and that goes for video game developers as well. I loved the fact that the writers weren’t taking themselves too seriously and that they were able to poke fun at some of the cliches that we tend to see in games.

Conduit 2 also offers up some multiplayer options. There is split screen action where you can play with up to three of your friends. There is also online play which actually works really well. The Wii was able to connect to their servers without a problem and it didn’t take long for me to get into a game. Once I was in a game everything ran really smoothly for me. It was a pleasant surprise and proof that the Wii can handle online just fine, as long as the developers put in the proper amount of time to make it work. When you first begin the online multiplayer your friend code is prominently listed in the upper right hand corner of the screen so that you don’t have to search for it. There are four different playlists to choose from with the “Big Team Grab Bag,” “Free for All Grab Bag,” “Hardcore Team Games” and “Hardcore Free for All”. There can be up to twelve players in a game, depending on the playlist. As you play you will also notice that there is character progression similar to what you would find in other online shooters. When you go into the online multiplayer you can either go into the matchmaking or create your own custom game. Overall, the multiplayer offering for Conduit 2 is very solid and it was great to see a good multiplayer game on the Wii.

You can tell that High Voltage Software put a lot of work into this title as it is easily one of the best shooters to appear on the Wii console. If you are a “hardcore” gamer and have been bemoaning the lack of good shooters on the system, well, now you have one to play. The ability to play the game as you see fit should definitely help to extend the replayability of this title. The writing team also did a good job in making me look forward to a possible third title in this series with an ending that I definitely wasn’t expecting. I am excited to see where High Voltage Software takes this series next and whether Conduit 3 will make an appearance on the Wii’s successor which is due out in late 2012. If you enjoy shooters and you enjoy the Wii console then be sure to give this game a try. You might be pleasantly surprised with what you find.