Another football season is upon us and that means a new iteration of Madden. This year Madden returns to the field with a more realistic presentation and some better controls. You seem to have a bit more control over your players which can result in hitting that hole as a running back or quickly knocking that running back down to the ground before he crosses the goal line. There is the Dynamic Player Performance feature that will affect player behavior based on their performance on the field. A number of modes make their return as well with the Madden Ultimate Team, Franchise Mode, Be an NFL Superstar and more. There are also online communities in this year’s version of Madden so you can create (or join) a community where the rules are pre-determined by the person who created the league and, as such, everyone plays by the same rules and it is an equal playing field.

EA Sports and the team at Tiburon worked a lot on the presentation side of things for this year’s version of Madden and it really shows. For the first time in Madden there are authentic player entrances for all 32 NFL teams. Everything that you see on Sunday is featured including tunnels, inflatables, pyro, cheerleaders and more. The Madden development team consulted with NFL Films which helped to create authentic camera and give the entire game a more authentic feel. The commentary is still there just like you see in an actual NFL game, however, unfortunately, the commentary is just as abysmal as it has always been. I keep waiting for EA Sports to actually do something with the commentary in these games but they never do. Once again there are quite a few times when the commentators start talking about something that never happened. There was one instance where the opposing team punted the ball to me and then they downed it, I never touched the ball during the whole play. Yet, the commentators started going on and on about how I muffed the punt. There was another instance where the commentators would talk about how I threw an interception the last time the offense was on the field when in reality we actually scored a touchdown. Such atrocious commentary, especially when presentation was supposed to be such a key element this year, is now inexcusable. We are almost six years into this console generation and this is a problem that should have been fixed and addressed years ago. It is also very interesting how at the beginning of the game they are going to announce my defensive starters and, yet, they only announce two people. Does the game think I am only going to play with two players on defense? There are parts of the game that feel unpolished or unfinished. The NFL were the people that were engaged in a lockout, not the development team so there is no excuse for these shortcomings.

There were other moments in Madden that left me scratching my head as well. There was one instance where my opposition converted on a third to get a first. I challenged the play though because I thought the officials made a bad call. After reviewing the play the officials came back and overturned their call, which would have made it fourth down, right? Well, instead of making it fourth down like it should have been, my opposition was given a fresh set of downs to continue driving down the field. I sat there dumbfounded as I tried to figure out what had just happened. There were other glitches as well such as disappearing players and there was even one time where after scoring a touchdown one of my players kept running right through the wall and disappeared. Additionally, the frame rate is not locked down as there were many instances where the game would stutter. After spending some time with the game online it seems to run fairly well, however, there was an awful lot of lag in the beginning. As my games went on the lag improved quite a bit, however, it was really rough in the beginning.

For all of the problems that Madden NFL 12 has it has a tremendous number of strengths as well. The Dynamic Player Performance really does affect how you play and gives the game more of an organic feel. I’m a 49er fan so when Alex Smith is on a cold streak he doesn’t have very much confidence and is more susceptible to throwing an interception. At that point I might elect to keep the ball on the ground because Frank Gore is on a hot streak and doing a good job at moving the ball down the field. The franchise mode is a bit more streamlined and has a much cleaner look. When you first start off you will simply see the two teams who are playing with the stadium in the background. All of the menus that you are used to are still there, you just have to push “Y” to bring it up. This is where you get news, handle team business, get stats from around the league and more. One interesting thing that I noticed is they removed “The Extra Point” feature. This was a show that has been in the past two iterations of Madden that brought a little more authenticity to the game. You would have NFL Network analysts talking to you about what transpired last week and what we can expect in the week to come. The problem was that this was a great concept, however, it was executed pretty poorly. Apparently, instead of trying to improve on the concept, they just cut it altogether.

Football fans that really like to control every aspect in Madden will be happy to hear about the new rookie scouting system and the new free agent bidding feature. There are now several scouting stages including: regular season, pro days, NFL Combine and individual workouts. How you decide to handle this will determine how many of his traits and how much of his potential unlocks. With the new free agency feature you’ll have to make decisions very quickly. You’ll face off against other NFL teams in an interactive bidding environment as you try to sign the player of your choice. If another team outbids you then you can simply press a button to increase your bid, however, you need to keep an eye on your cap room. This adds a nice strategic layer to the game and is something that hardcore Madden players should be really excited about. 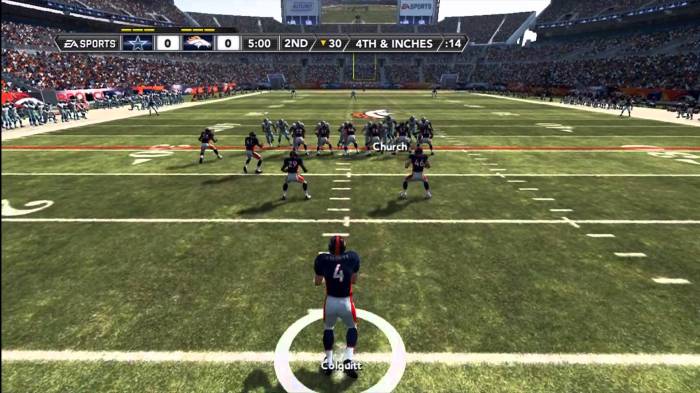 The Superstar mode has been updated with a new progression system which allows you to earn skill points by participating in not only practice but games as well. A new position specific coordinator coaches you by teaching you your responsibilities on each play. This was a great feature as it made the whole thing seem a bit more immersive. You also now have the ability to level up the way you want and you can either walk on and choose a team, enter the Draft or import a player from NCAA Football 12. The Madden moments also make a comeback where you get your chance to rewrite history. You are put in a specific situation that transpired last season and you have to see whether you can engineer a different outcome. Interestingly enough the mode is titled “Madden Moments Live”. At the beginning you are given five of the best moments of the 2010 season to relive, however, it appears that new challenges will appear periodically, based on real events that will take place this season. It is a pretty cool concept and I can’t wait to see how it turns out.

I briefly mentioned the online communities feature above and it is a mode that I really enjoyed. I was able to join a community and you can make it either public or private so that only the people you want in will be able to get in. Each online community can have from two to 2,000 players and everybody can participate in up to five different communites. The interface was really well done as you can quickly see not only your stats but the stats of other community members. You also get a quick look at recent games played within the community to see what happened and where everyone stands in the rankings. From the lobby you can also view a box score and participants of games in progress. It is important to note that your individual team play squad stats in one community will indeed carry over into all your other communities. Another thing that gamers should be happy about is that grieving rules are in place. Individuals who cause excessive delay of game or encroachment penalties will be booted from the game. Overall it is a great feature that works well and it is a great way for you to have a nice experience online without having to deal with jerks. 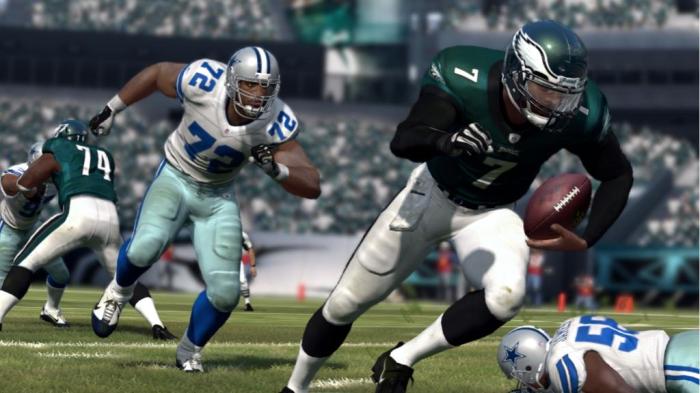 Madden NFL 12 has its share of problems, however, it also has a lot going for it. There really needs to be more than one studio making NFL games so that studios don’t become complacent in the absence of competition. I’m well aware of the exclusivity that EA Sports has with the NFL, however, once that deal expires I hope to see some competition with these games which will only benefit everyone involved. Having more control over my players this year is a step in the right direction and the dynamic player performance system adds in a nice layer of complexity. If a quarterback doesn’t have any confidence in himself then he is obviously not going to throw it as well as someone who has complete confidence. This shines through in the game play and makes you have to think about what your strategy will be moving forward. If you are a football fan I would definitely recommend giving this game a try. Get past the fact that a lot of problems Madden has had for years are still there and you should have a great time with Madden NFL 12.