After years of waiting Deus Ex Human Revolution has finally arrived and it was well worth the wait. Eidos Montreal has done something really special here by creating an experience that really doesn’t exist in a crowded genre. Deus Ex Human Revolution will be classified as a first person shooter, however, it is much more than that. In addition to the standard FPS mechanics you get to pick your own path and choose how you will arrive at your destination. The game features multiple endings which will happen based on the decisions you make throughout the game. You will experience how open this game truly is after you get done with the opening sequence. It is not long before you need to go to a police station and there are four different ways to get in and approach the situation. You can either walk in through the front door and convince one of the officers to let you in, you can sneak into the police station through a sewer, climb up a fire escape and hack a side exit or climb to the roof and get into the building through a vent. Each approach has its advantages and this is where some of the replayability of the game comes in. After going through that section I was wondering how things would play out if I chose an alternate path and I can see myself going through the game multiple times to find out what happens.

As you progress through the game you will earn XP for your actions which, in turn, will get you Praxis points. You use these points to augment your character in a variety of different areas. You can augment your cranium, torso, arm, eye, back, skin and legs. Within those categories you have abilities to level up so that you can tell what people are thinking when you are questioning them, your hacking skills can improve, you have less recoil when you fire a weapon and more. You can create the character that you want to be and each choice will have a consequence. If you spend all your time upgrading your hacking skills then your social skills might suffer and it might be tougher to get others to see things your way. In addition to the missions related to the story of Deus Ex you will also have a plethora of side quests to complete, if you choose to do so. If you are one of those people who love to get achievements/trophies then you are going to want to do all the side quests because some of them are linked to unlocking achievements/trophies. Completing a side quest could also have some unforeseen consequences for you later in the game. If you helped someone out of a jam then they might be able to help you in some way later on. During some of the main campaign missions you will have some decisions that you need to make. What happens next will be dependent on your decisions. During one of the first missions I was on there was a hostage situation. I had to try and negotiate the safety of the hostage, however, there were many things at play here. I could try and simply shoot the hostage taker and quickly be done with everything or I could try and resolve the situation peacefully. I went the peaceful route and once the hostage was freed I had another decision to make. The decision I eventually made allowed me to get some information later on in the game that I otherwise would not have been able to get. 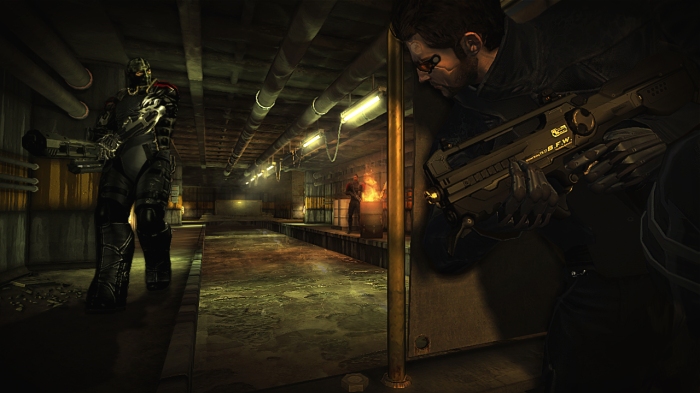 You get to visit a few different cities in the game and each one has its own charm to it. Some of the vistas in the game are amazing. There was one time where I simply stood on a helipad on the top of a tower and looked out on to the city for a minute. The cast of characters in the game is pretty eclectic and you never really know what is going on. As someone tells you later on in the game, everyone lies so you have to be careful. Everyone seems to have their own agenda and it doesn’t necessarily line up with yours. Going through this game you are going to want to explore your surroundings as much as possible. If you take the time to do this then you will make things easier on yourself and be sufficiently rewarded. As I progressed in the game I got in the habit of trying to track down security computers so that I could hack into them. By doing so I could deactivate the security cameras as well as the turrets and robots once I leveled up. You certainly don’t have to do this, however, it will make things easier for you if you do. One of my favorite moments in the game was when I finally leveled up to the point to where I could control the turrets. I set it to attack my enemies so that when a group of enemies would swarm the room I was in I would simply sit back and watch the turret do the work for me. You get the same amount of points and experience then you would if you had done it yourself plus you save some ammo that you might need later. As you progress through the game it will make you think about leveling up constantly. There will be items that you will need to be stronger if you want to move them or you might want to hop over a rail to the level below you, however, you might not survive the fall unless you unlocked a special augment. You have to take everything into consideration and this is one of those things that truly makes this game shine.

As I have alluded to above the developers of this game were very big on player choice. There are always multiple ways to handle any situation. The stealth in this game is really well done and I believe there is even an achievement for going through the game without killing anyone (bosses excluded of course). One of my favorite tactics was going through some air vents to try and get the jump on an enemy soldier and then quickly ducking back in before his friends could find me. Even this will have a consequence though and it is something you have to carefully plan out. If you take out a soldier and one of his buddies walk by then he is going to sound the alarm and you will have a swarm of enemies searching for you. Additionally, if you take someone out right by a security camera the camera will detect the body on the ground and alert the enemy. You can certainly use this to your advantage by drawing attention to a certain area as you quietly sneak past while your enemy is preoccupied. If you don’t want to draw attention then you can drag the body to a location where you don’t think anyone will find it. If you perform a lethal takedown then, obviously, he won’t be getting back up. If you do a non-lethal takedown though another enemy soldier can revive the guy you just knocked out. This particular aspect of the game reminded me a little bit of the Hitman series which, coincidentally, is another Eidos franchise. I didn’t get to go so far as changing into my enemy’s uniform like I do in Hitman but having to stash the body somewhere added another layer of strategy into the game. Then, of course, if you are the type of player that doesn’t enjoy stealth you can always go in to any situation with guns blazing just like a normal first person shooter.

Deus Ex Human Revolution is a pretty amazing game. There is so much more that I could say about it, however, I don’t want to spoil anything else for you. I’m treating this game as the first blockbuster of the holiday release season that will, hopefully, be littered with amazing titles. It doesn’t matter if you haven’t played any of the other Deus Ex titles. If you are a person that enjoys titles that give you complete freedom on how to complete an objective than this is the title for you. Being able to do things my way (and then seeing the consequences of those actions later on) is fantastic and is hopefully something that other development studios will pick up on. I really enjoyed the characters that I encountered and the story over all. The dialogue was pretty good in my opinion and I really enjoyed the overall atmosphere. The development team over at Eidos Montreal has created something special here and I can’t wait to, hopefully, play the sequel in a couple years.