Brink is the latest title from Splash Damage and it is a very interesting title. I have been looking forward to Brink for a couple years now as it seemed to have a lot of potential based on what little I had seen. Unfortunately the potential this title had was not fully realized and instead we get a game that is a bit of a mess. In the first week alone there have been multiple patches released because Brink was released unfinished. There is a campaign for you to go through as well as “freeplay” and some challenges that you can try to complete. Brink features multiple classes such as a medic, engineer, operative and more. As you level up you can purchase upgrades for your soldier by upgrading whatever class you see fit. I upgraded my “operative” class quite a bit and was able to construct some turrets on the map to help turn back the enemy wave that I was constantly facing.

Brink features a campaign where you can pick which side you are on. There is either the security side which is trying to prevent people from leaving the Ark and causing mayhem or the Resistance side where you are trying to leave the Ark to establish contact with the outside world. Judging by that premise it probably sounds like you go through the same level twice, just on different sides. While that is true for some levels, there are new levels available for the resistance and/or security factions so you don’t have to see everything twice. The story in Brink is almost nonexistent and basically encompasses what I mentioned up above. There are some short cinematics before each level but each cinematic has similar qualities. In every cinematic you will see someone complaining and wondering if they are doing the right thing with someone else telling them to shut up and do your job. I’m not kidding when I say that scenario plays out in almost every cinematic. It gets to be pretty old, pretty quick. 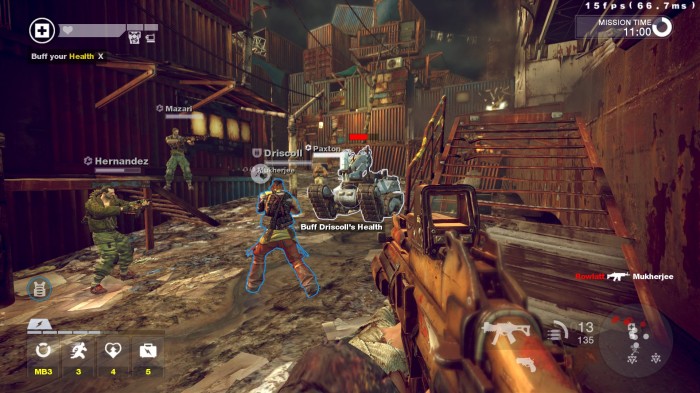 As you progress through the campaign you are going to want to make sure you are playing with a friend. If you go through the campaign by yourself you are just going to be playing with bots. The A.I. in Brink is incredibly stupid and there are often times where they are more of a hindrance rather than a help. There was even an occurrence where I set up a turret next to a station that I was going to hack to try and protect me from incoming enemies. There was a moment where an enemy was standing right in front of the turret and it never went off. You need a friend to back you up on those missions. You need someone to watch your back as you hack into a system or repair a broken piece of machinery. The placement of the objectives is also pretty bad too. I remember one level specifically where my objective was located right where the opposition would spawn so it was almost impossible to complete. It became so frustrating at one point that I simply turned the game off and walked away for a while.

There is also the “Freeplay” option where you can tackle missions in a public or private game. This is where all of your opponents (and allies) are players on Xbox Live and not some stupid A.I. character. Unfortunately, this mode is a complete mess. I played through the campaign with a friend over Xbox Live and everything ran perfectly, in terms of there being no lag and things of that nature. As soon as I jump into the “Freeplay” mode though it is a totally different experience. The net code here is really, really bad and the amount of lag that you encounter almost renders the game unplayable. Even after downloading and installing the patches from the publisher, this mode is essentially broken. There were times where my match would, essentially, become a slideshow. I couldn’t move or somehow I was transported to another part of the map or the map itself would fade in and out. The more players that were in the match, the worse it got. It is mind boggling that the game was released in this state.

Once you are through with that you have some challenges that you can complete, if you so desire. These challenges will have you racing to complete a certain number of objectives while your teammates try to draw the enemy fire. You get bonus points based on a variety of factors such as the speed with which you completed your objective(s), not dying, getting headshots and more. You are also told what your rewards will be so you can pick which challenge you want to complete based on what reward you want.

Overall, Brink was a disappointment. The game itself is not totally broken as I was able to beat the game and completely go through both sides of the campaign. You will definitely want to make sure you go through it with a friend though. It will make things much easier for you and more fun. The other online modes are a joke and they need to be fixed quickly before gamers move on to the next title. Parkour was advertised as being a vital element in this game, however, it really isn’t. If you want a good parkour game I suggest playing Mirror’s Edge. I highly suggest that you rent Brink before you buy it. If you rent the title and really like it then by all means pick it up. Just be sure you know what you are getting into and you don’t waste your money on a game you might not like.