Nail’d is Deep Silver’s latest offering and it is an off road all terrain vehicle racer. One thing you will immediately realize is that this game is incredibly fast and very arcade-y. It is all about how fast you can go while staying on the course and going through the ups and downs that you will face. Nail’d is extreme racing that has you flying off cliffs, over trains, up the side of a tunnel and much more. You will have to have quick reflexes as a course suddenly changes direction on you or if you need to try and negotiate a landing without landing face first into a wall.

Nail’d features 14 diferent tracks that are unlocked from the very beginning. If you bought a copy of the game brand new you are given a code to download four more tracks and a whole new mode, for free. The track locales have been seemingly randomly picked with them being based on Arizona, Greece, the Andes Mountains and Yosemite. The handling in Nail’d seemed to be pretty sensitive which some people will have to get used to. It is really nice though being able to quickly cut inside and overtake your A.I. opposition as you cross the finish line. The career mode in Nail’d (a.k.a. the Tournament Mode) features 49 races. By completing tournament races you will unlock different vehicle parts and costumes for your rider. This will lead you to the garage in Nail’d where you can tune your vehicle until you get it how you like it. You can work on the body, exhaust, engine, shocks and more. This is also where you will pick the gender of your racer as well as the style and suit that your racer will wear while, well, racing. 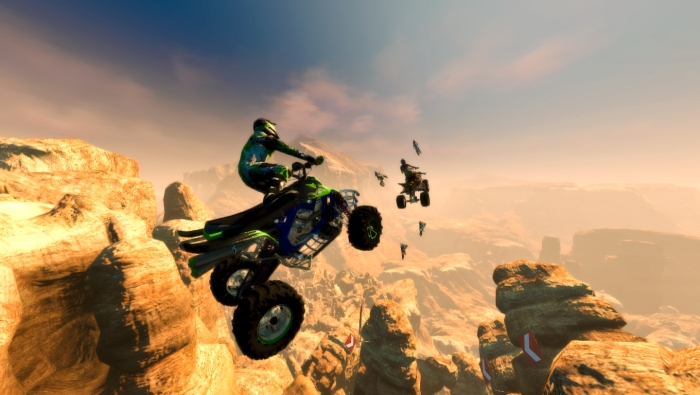 Including the free downloadable content that you get with this game there are four different modes for you to try. There is the simple race mode, time challenge, stunt challenge and detonator. In Stunt Challenge you are assigned point values for every feat you perform successfully. The winner of this event is determined not only by who crosses the finish line first but who has the most points. Once the first person crosses the finish line then everyone else’s points start going down so you want to finish as quickly as possible. The Detonator mode is pretty interesting as it is essentially a game of hot potato. You have this bomb on the back of your vehicle and you have to complete a boost feat in order to send the bomb to another player. If the bomb explodes then it is essentially the same thing as if you had crashed and you will lose a few moments while your character respawns. If you are in a close race this could mean the difference between victory and defeat.Having the hot potato mechanic definitely added some additional tension to the race and made it a lot more fun racing against friends. The simple race and time challenge modes should be self explanatory.

Nail’d also features a multiplayer mode where you can play at home or online with your friends. System Link is available if you have a bunch of friends over as well as going online with Xbox Live or PSN. Up to 12 people can participate in a race which should make for some insane races as everyone is jockeying for position. The standard set of options are available online such as creating your own match, jumping into a quick match and things of that nature. Nail’d has also added an interesting feature to their leaderboards. When you initially start up the game it will ask you where you are located. The reason for this is because the game will track your ranking based on people from your same locality. You can also break the leaderboards down by each track and each type of race within each track.

Nail’d is a really fun, arcade-y racer. The sense of speed is pretty incredible and you will have to pay close attention to make sure you don’t miss any of the route markers or end up splattered against a tree. This game isn’t incredibly deep in that you know immediately what you are going to get. That’s not necessarily a bad thing though as Nail’d was exactly what I wanted it to be. It is a fun off road racer whether I am battling it out with the A.I. or a group of my friends. The tracks feature multiple routes that you can take so you never quite know what is going to happen next or when one of your opponents might use you as a landing pad after jumping off a cliff. Hopefully this game is supported with downloadable content as I would love to have new tracks to race on every couple months. If you are a fan of arcade-y off road racers then this is a game that you really need to try. Nail’d doesn’t have all the hype that some of the recent releases have enjoyed but it is just as much fun.