Blood Stone is the latest Bond title to hit the Xbox360 and Playstation 3 and the first one with Bizarre Creations at the helm. For those who are familiar with Bizarre’s history it might seem a bit strange that they would work on a James Bond title, however, they did a good job with it. I was having a lot of fun with the story of Blood Stone right through to the end. You start out in Athens, Greece and, of course, it is up to you to save the day. There is an imminent attack where a bunch of delegates are meeting and the security on the site isn’t being very receptive to M’s concerns. This opening mission had a lot of nice variety with the traditional third person shooter aspect, chasing after an enemy in a speedboat and then racing down a highway trying to prevent the bad guy from reaching his destination. Then, after you successfully do that, it goes straight into the opening sequence just like in a Bond film. The developers nailed the look and the feel of what it must be like to be James Bond.

As I mentioned above Blood Stone is a third person action adventure title. You assume the role of James Bond as you try to save the world once again.Along the way you will travel the world tracking down your enemy whether it is on foot or behind the wheel of a classic Bond car.No Bond movie (or game) would be complete without a Bond girl who is played by Joss Stone. Going throughout the game you will always have your trusty silencer as well as your smart phone. Your smart phone can scan the area you are in and tell you which way to head, if there are any enemies around you and it can also look for items to scan to enter into your intelligence database. One thing I really liked was how it would help with enemy position and it would tell you what gun your enemy was holding so that you could plan your strategy. Depending on how you like to play your games you can go through Blood Stone one of two ways.You can go through guns blazing but that is making it unnecessarily hard on yourself. Or you can utilize some stealth and take out a group of guards without them ever realizing that you were there. You will get an achievement too for taking out a certain number of guards utilizing a stealth takedown. There are also certain instances where you lose a bit of control. What I mean by that is there might be a big jump that you need to do but all you need to do is get close to the edge and push the “B” button and then you will see Bond successfully make the jump. You don’t actually have to make the jump yourself. For me personally I enjoyed that as it helped to keep me immersed in the events that were unfolding. Blood Stone has a nice cover system that will allow you to quickly move from cover to cover, however, there were times when I seemed to “stick” to the cover for a few moments longer than I wanted. It didn’t happen a whole lot but there were a couple of times when it definitely made things hard for me. 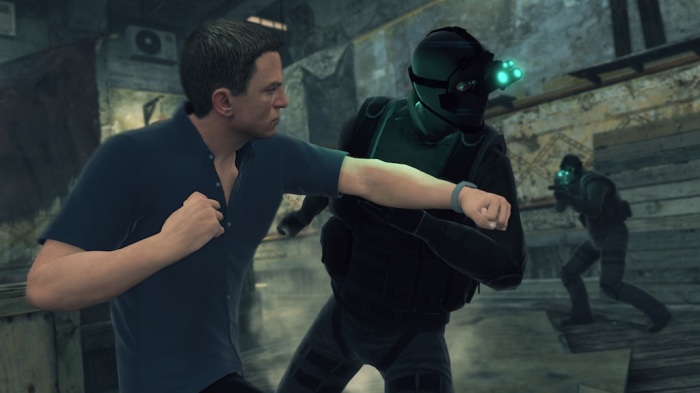 The presentation for Blood Stone was really nice as it did make you feel like you were part of a Bond movie. As soon as your objective was completed you would either see a cinematic or, at the very least, you would get in contact with MI6 over the phone to discuss your next move. Also, while I’m on the subject of the cinematics, you can pause at any time during these cut scenes. This needs to become an industry wide standard. Especially if you are playing a title (or series) with notoriously long cut scenes the ability to pause really helps. Additionally, I would like to see a rewind feature implemented in cinematics. That way if we miss something due to a phone call or whatever we can rewind and rewatch what we missed. The checkpoint system in the game seems to work really well and you are never pushed too far back if you get taken out and have to respawn. Anyone who is familiar with Bizarre’s history knows they were responsible for the Project Gotham Racing series as well as Blur which came out earlier this year. With that said it shouldn’t be any surprise that I thought the car chase sequences were well done and the cars controlled really nice. I can see some people potentially thinking that the controls are too sensitive but I was able to adapt to it just fine.

Blood Stone 007 also features a multiplayer component where you can go online and test your skills against others. My time with the multiplayer was positive overall with me being able to immediately get into a game and trying out the different game types. The only part that didn’t go so well was I kept getting killed but that certainly isn’t the game’s fault. You have three different game types to choose from with Team Deathmatch, Objective and Last Man Standing. Each one of those should be self explanatory to gamers who play a lot of shooters but if you don’t the team with the highest score in Team Deathmatch wins. In Objective you have some objectives you need to accomplish. If you are on the “offense” then you need to work on fulfilling those objectives. If you are on “defense” then you need to prevent the other from fulfilling those same objectives. Finally, Last Man Standing is won by being the Last Man Standing. In my time with the multiplayer I didn’t notice any lag at all and everything seemed to run really smooth. There is also an option for system link where you can hook up multiple consoles and play some local multiplayer.

Overall, I had a lot of fun with Blood Stone. I thought the pacing was done pretty well and I enjoyed the presentation throughout the story. There were definitely some classic Bond moments in the game and there were a few times where it looked like the development team used the recent Bond film, Casino Royale, for inspiration. If you try to simply run through the game than Blood Stone is going to be fairly short. If you take your time and utilize stealth tactics then you’ll extend the time a little bit, however, it is still a pretty short game. They don’t do anything revolutionary here but, in my opinion, not every title needs to do that. This was a great Bond adventure with some classic Bond moments.