The next iteration of the Fight Night series has arrived with Fight Night Champion. As someone who didn’t play a whole lot of the two previous titles I didn’t quite know what to expect here, however, I enjoyed my experience. You have your standard exhibition mode as well as Legacy mode, Champion mode and some training mini games. My favorite was unquestionably the new Champion mode. This is the story mode for the game and follows one boxer’s career as he tries to become a legend. There is also an online portion of the game where you can share boxers and allow others to download them. The boxers even show what gamertag uploaded them so you can keep track of who makes the boxers you tend to like. There is even an option to search for more boxers from your favorite creator. This is, of course, in addition to the fighting modes that are available on Xbox Live as well.

One of the most important aspects about a game is how well it controls. Fortunately, Fight Night Champion lets you decide the control scheme that you want to use. You can throw punches either by pressing buttons or by making motions with the right analog stick. You utilize the triggers for either blocking or trying to evade an incoming punch. There is a bit of strategy involved as well as you need to be able to play just as effectively on defense as you do on offense. As you are fighting you need to keep your eye on your stamina meter. If you let your meter dip too low then your fighter will become a lot slower and will be more susceptible to attacks from your opponents. There were a couple of times where I would get knocked to the ground because my fighter simply didn’t have the stamina to block the oncoming punch. There are also flash knockouts from time to time so you need to be wary of that possibility as well. If all you do is charge ahead and don’t properly protect yourself you will eventually pay the price. 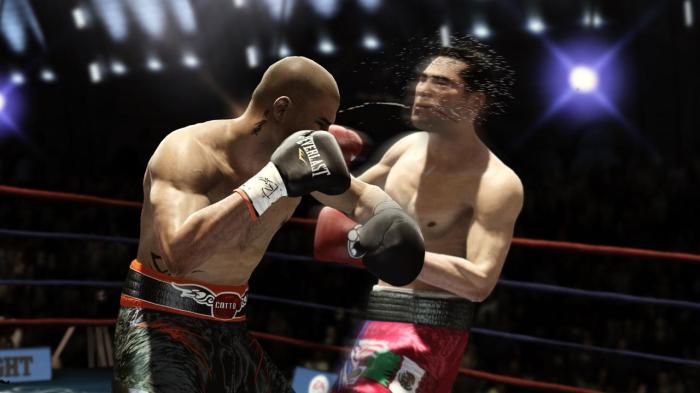 Unfortunately, there are a couple of areas where this game stumbles. The frame rate isn’t completely locked down as I would see it momentarily stutter from time to time. Whenever I am in the menu it seems to take longer than it should to load up my next option. It is almost like the menu system wasn’t optimized before the game was finished. Then there are the audio problems. At the beginning of a fight you will hear the ring announcer talking about the upcoming bout. The problem is that you will hear the commentators talking at the same time. What this essentially does is make sure that you don’t really understand anything that is being said. They went to the trouble of getting someone to voice the ring announcer so why would you put the commentators speaking at the same time? It makes absolutely no sense at all. It should have been the ring announcer going through his introductions and then the commentators can chime in. Additionally, there were times in this game where the commentary didn’t reflect what was taking place. There was one fight where I was in the fifth round and the commentators started talking as if it was the sixth round. They started talking about things that happened two rounds ago in the fourth, when, in reality, it only happened the past round because I was fighting in the fifth round, not the sixth. Madden has this problem too where the comments aren’t always relevant to what is currently taking place in the game. I’m not a programmer but there has to be some way to fix this issue for future titles.

For those gamers looking to manage their own boxer there is Legacy mode. Legacy mode is essentially the career mode for Fight Night Champion. When you first start out in this mode you are given the option to pick a pre-existing fighter or create your own. I decided to create my own to see everything the game had to offer and the creation system is pretty robust. There is one problem though and I can’t understand what the development team was thinking. When you create your own fighter you have the option to take a picture so that your likeness will be on your new boxer. The problem here is that this option only works if you have the Xbox Live vision cam. This option does not work with Kinect. I am dumbfounded as to how the development team let this slide. Kinect is a camera just like the Xbox Live vision cam. There is absolutely no reason why it shouldn’t be able to take a picture and this oversight insures that only a very small group of people will be able to use this option. Once you actually get in to Legacy mode you will have some XP to spend to try and level up your fighter as you see fit. One of the problems of Legacy mode is that your fighter starts out so weak that you are going to have a hard time against your opponents. The leveling up process is pretty slow and it just seems like this mode was a bit of an afterthought. It seems like it was thrown into the game for those people who really want to jump in and micro manage their boxer. The calendar system works similar to EA Sports MMA and THQ’s UFC titles. Once you schedule an event you have to decide whether you are going to train one week, do some promo work or rest to regain your stamina. You will also get a chance to pick what camp you want to train at as long as you have the necessary funds. You have two types of training that you can utilize between Skills and Athletic Training. Skills training will have you go through a mini game where athletic training simply has you picking an option and then your stats will go up accordingly. Legacy Mode really wasn’t my thing but I know other gamers that should have some fun with it.

As I alluded to above, my favorite thing in this game was Champion mode. The story only takes a few hours to go through but I thoroughly enjoyed it. The graphical presentation and the cinematics were pretty awe inspiring at times. This is also where the partnership with ESPN really shines. After a big storyline moment takes place you are brought to the ESPN studio for “ESPN Friday Night Fights”. This is where the analyst goes over what has taken place and also shows you what else is happening in the world of boxing. It is essentially the same thing that you would see on television during shows like Sportscenter. As you progress through the Champion mode you are presented with different obstacles that you have to overcome. There is one fight where the referee is corrupt so you have to be careful on how you fight or you might get disqualified. There is another fight where your right hand is broken so you have to fight southpaw. It should be noted that you can still fight with your right hand during this bout, however, you run the risk of permanently damaging it which could affect future fights. A couple of the obstacles you had to overcome were really tedious but the majority of them were pretty fun and helped change things up so that you didn’t get bored. There isn’t a whole lot that I can say about Champion mode without ruining the story so I will just say to give it a chance and don’t overlook it.

Online play is also a huge part of Fight Night Champion. You can create your own gym, join a gym that your friend has already made or search for a random gym that looks good to you. When you are searching for a gym you are given the gym statistics such as how many members it has, whether it is accepting new members, the gym rank, the current champion and more. It also lists the gamertags of the members of the gym so that you know whether one of your friends belongs to that particular gym or not. There is also the World Championship mode where you use a created boxer in your quest to become the Fight Night World Light, Middle, or Heavyweight Champ. When you are in the main menu of the game you will periodically see a notification that, for example, the Heavyweight Champion has just signed on and is playing Fight Night Champion. There are also various prize fighting events online where you can challenge friends and enter tournaments. It is a fairly robust online offering and one that should keep Fight Night Champion fans busy for a long time. 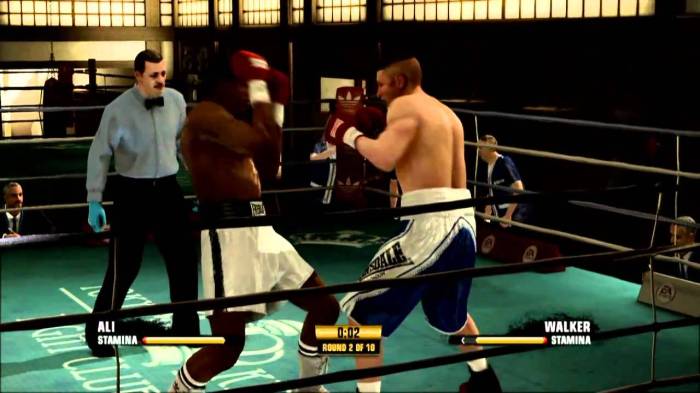 Overall, Fight Night Champion is a good game. Despite the flaws that I mentioned above I enjoyed my time with the title and will definitely keep playing it. The mechanics of the game are such that both newcomers and seasoned veterans should be comfortable in the ring. For the more hardcore player you can manage a fighter in Legacy mode or go online and challenge the world. For the more casual fan they will get a kick out of Champion mode as well challenging their friends to a bout. If you are a boxing fan at all then this title should keep you busy for a while. Be careful though because you never know what is coming during a fight. One wrong move and you might find yourself on your back staring up at the lights as the referee stops the bout and ends your dream of becoming the Fight Night Champion.