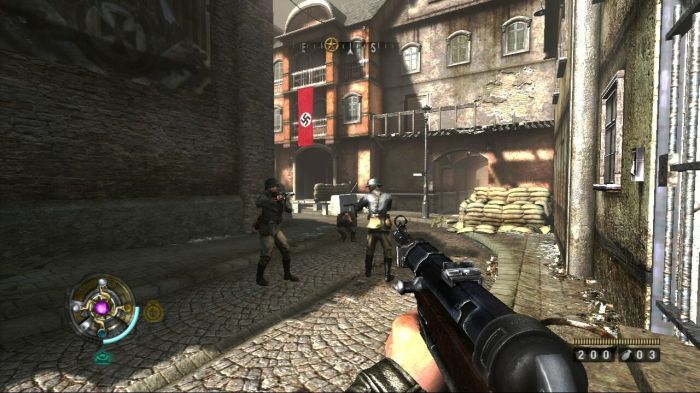 Wolfenstein is back with a new iteration in the series from id Software and Activision. In this new adventure you play as Allied agent B.J. Blazkowicz and it is your job to stop the Nazi’s at all costs. You begin the game arriving in Isenstadt, however, the Nazi’s already know that you are coming and have prepared an ambush for you. Once you survive that you will go to the Kreisau Circle safe house, which is one of the factions that you will be working with throughout your adventure. The Kreisau Circle is part of the resistance movement and it is your job to help them (and other factions) in any way you can as you try to discover what the Nazi’s are up to and then destroy them.

Wolfenstein plays like any standard shooter. If you are a shooter fan you will be immediately familiar with how the controls are layed out. With that being said though, there are definitely some aspects to this game that are not found in your typical shooter. As you progress through the game you will discover a Thule medallion which will give you various powers. First you have Veil sight which you can use to discover new pathways, among other things. If you are in a room and there doesn’t seem to be a way out simply use this power and all of a sudden a hole might appear where a wall used to be. Using this power you can also see geists, which can be used to help you dispose of pesky enemies. There is also a “Mire” power which slows down everything. Once this power is upgraded though BJ can move in real time while everything else is slowed down. The next power is the Veil Shield which will protect you from gunfire when it is activated. Finally there is “Empower” which will add additional damage with each bullet as well as penetrate any veil shields that the enemy might be using on you.

The developers on this title went for somewhat of an open world concept with this title, however, they didn’t go far enough with the concept. You have a town that serves as a central hub with safehouses for various factions as well people you will meet on the street that will give you missions. There is also the Black Market where you can go to upgrade your weapons how you see fit. One important thing to note is that you won’t have enough money to upgrade everything, so you will want to pick a favorite weapon or two and concentrate on fully upgrading them initially. As you are walking through the city you will come across German patrols, which you will have to dispose of if they notice you. If you don’t feel like fighting you could always try and go across the roof of the surrounding buildings or in the sewer below where there aren’t any patrols. As you progress in the game the patrols that appear in the city become more powerful and you will have to use your newly acquired skills to try and survive. The missions themselves though are pretty linear which can be a bit of a disappointment if you were expecting the whole game to be in an open world. You will get the chance to visit various locations such as a farm, a dig site, a cannery and more, however, the open world concept is taken out here. Instead of traveling to your mission you are simply “warped” there. Once you get done with the mission at that site then you simply “warp” back to town. It could have been really cool if we were given vehicles or something to drive to our destination. Doing that wouldn’t have made the game feel as linear at times.

The other aspect to this game is of course the multiplayer. At times it almost seems like the multiplayer was an afterthought. It takes entirely too long for things to load which will frustrate players before they even start playing. Once you finally get in and start playing there really isn’t anything that special about it. There are just three modes with Team Deathmatch, Stopwatch and Objective. It is standard shooter fare and I don’t see many gamers dropping titles like Call of Duty or Halo for the Wolfenstein multiplayer.

Overall, Wolfenstein is a competent shooter. It doesn’t really do anything to break the mold, however, there are definitely some fun moments and you should enjoy going through the campaign. The difficulty curve seems to be pretty good and shouldn’t frustrate gamers who don’t have much experience in this genre. It also came out at the perfect time before any of the really big shooters hit the market. I would definitely reccommend giving this game a try although you might want to rent it first to see whether you like it or not.