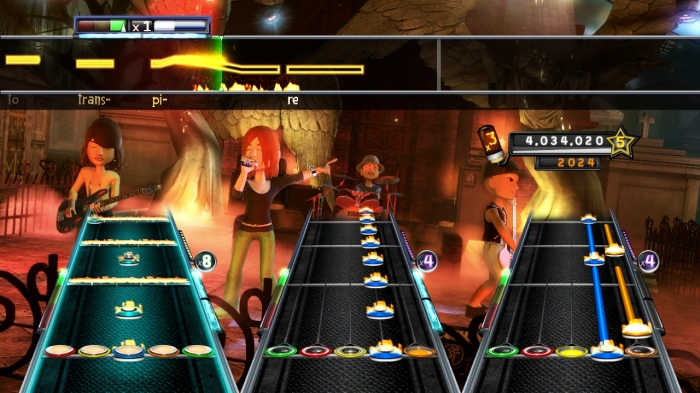 Guitar Hero 5 is Activision’s latest title in the popular Guitar Hero franchise. With this being one of the “main” titles there have definitely been some improvements made to the formula. For starters everything looks cleaner. It seems to flow better and the overall presentation is much better than in previous iterations. For the XBox360 version you can rock out with your avatar which adds another layer to the game, especially if you are having a party or are playing this game with family members who have their own avatars. There is just something cool about playing and watching your avatar jam on the guitar on stage and seeing them throw up the horns as they get into it. It was a great idea by Activision and hopefully there will be avatar support in all future Guitar Hero titles. With that being said, using your avatar is completely optional. If you are not interested in this feature then you never have to use it.

Another new feature in this year’s version is the ability to assemble your band in any way you see fit. You can play with any combination of multiple guitarists, bassists, drummers or vocalists. You can now rock any way you want whether it is with two guitars and two drummers, four guitarists, or three guitarists and a vocalist, any combination is possible. This is available in every mode of play so you can truly play however you want whether you want to take it easy with some quick play or advance your career. There is also a new Party play mode this year that will allow players to immediately jump into the action at the press of a button. If you need to leave in the middle of a song you can immediately drop out or if the song is too difficult for you, then you can change the difficulty on the fly without interrupting anything. Additionally star power is handled a little differently this time. It used to be that if you played in a band with friends that you would share one star power meter. That is no longer the case in Guitar Hero 5 as you each have an individual star meter and once you completely fill yours then any additional star power you earn will go to someone else who needs it. This could help out greatly if you have someone in your band that is new to the game and not doing very well. If that same person fails out of a song in Guitar Hero 5 you will also have the chance to bring them back with the band revival meter.

You also have “band moments” this year which begin once the notes are on fire. If every member of your band hits every note that is on fire then you will get a 2x multiplayer for the entire band. There is also a great new feature where if you are in the menus and all of a sudden your favorite song comes up, all you have to do is hit the “Y” button and you will immediately jump in and start playing the song. It is incredibly seamless and will allow people to jump in and play at a moments notice. Once you join in you will pick your instrument and difficulty and then immediately start playing. After you finish one song you will immediately start on another one and it will keep going until you stop. You can drop out at any time and the song will continue as if you weren’t every playing it.

As you progress through career you will immediately notice that each song has an additional challenge this time around. An example would be with “Steady, As She Goes” by The Raconteurs challenges you to hit as many kicks as you can as a drummer. If you hit 100 kicks you get gold, 220 kicks you get diamond and 390 kicks will earn you a platinum award. This will correspond to how many stars you will get for your performance. With these new challenges you can now earn up to eight stars per song, the most ever in a Guitar Hero title. As you continue throughout your career you will have the standard progression as you unlock more songs and once you get enough stars you will unlock new venues. There is also the competitive aspect to this game where you can test your skills against others with four player local and up to eight player online battles in the new RockFest mode. Within RockFest mode there are a bunch of different ways that you can play. You have Momentum where songs get more difficult or easier on the fly depending on player performance. There is Perfectionist which rewards players with the highest percentage at the end of each song. There is Elimination where players are eliminated through a song based on their performance in each segment and the last man standing wins. With Do or Die if you miss any three notes for a song section it will temporarily knock players out of the game and keep them from scoring. With Streakers players are awarded points for each note streak in multiples of 10. Finally, with Pro Face Off you are in a head to head battle where players all play the same song on the same difficulty with the same instrument.

The Guitar Hero Studio is back as you can download songs off of GHTunes, pick any style of music and jam along with GHJam or create your own songs and customize the gameplay with GHMix 2.0. You can also import certain songs from Guitar Hero World Tour and Guitar Hero Smash Hits, adding to an already impressive number of songs in Guitar Hero 5. You can of course create your own rock star. There is also the music store where you can go to download new tracks that have just been released using Microsoft points.

Overall, Guitar Hero 5 is an absolutely fantastic title and is the best Guitar Hero game in quite some time. There is something new for everyone, even if you have played every single Guitar Hero game to ever be released. Be sure not to sleep on this title. If you are a fan of rhythm games then you owe it to yourself to give Guitar Hero 5 a chance.