The original Crash Team Racing was released in 1999 on the PlayStation 1. 20 years later we have a remake with Crash Team Racing Nitro Fueled and it is still just as much fun as it was back then. Of course, there were some small tweaks and changes had to be made to bring it into the modern era but overall it still remains a tremendous amount of fun to play. One thing that Crash Team Racing was known for is that it was a pretty difficult kart racer and this new version is no different. This is a seriously challenging racer that is probably going to take a lot of trial and error for a lot of people, especially if you are someone that is trying to get the 1,000 gamerscore on Xbox One or the platinum trophy on PlayStation 4. If you are a casual gamer that just wants to have a good time I highly recommend you put the difficulty level on “Easy” and just have fun. It will still offer you a decent challenge but nothing like “Normal” and “Hard” will put you through.

There is a lot to like in Crash Team Racing Nitro Fueled and a bunch of content that should keep you busy for a while. There is the Adventure mode which is essentially the game’s campaign, local play, online play, a pit stop where you can purchase items using in-game currency, and the Grand Prix. The adventure takes you through the story of Crash Team Racing where it up to you to race to save the planet. You will come across some familiar foes from the Crash Bandicoot franchise and have to prove you have what it takes on the track. There are different “worlds” for you to race in with each one finishing with a race against the boss. If you win that race you will receive a key to the next area. That is pretty much the whole premise throughout the story that you can easily clear in an afternoon or evening. Once you have successfully gone through a race you can return at any time to try and accomplish some goals that weren’t available your first time on the track. There are crystal challenges where you need to collect all of the crystals in a set amount of time. There are CTR tokens to earn that will allow you to participate in Gem cups once you have found enough, and more. If you are someone who likes to try and 100% their games, this will keep you busy for a little while.

In addition to the career mode, there is also local play where you can have fun playing against your friends from your couch. It is called “Local Arcade” here and features single races, cup races, battle, time trial, relic race, CTR Challenge, and Crystal Challenge. There are plenty of ways to challenge your friends to see who the best Crash Team racer is whether you want a straight-up race, or whether you want to battle it out on the track or see who can collect the most crystals. If you want to play against others online you have three different options with “private match” “matchmaking,” and “friends”. If you go the private route you can choose what type of race it is while with matchmaking you do whatever comes up against random people, and then the friend route has you sending out invites to those who you want to race against and then selecting all of the different options available to you.

As you play through the game and unlock more things you will earn in-game currency. This currency can be used in the game’s shop, also known as the Pit Stop. There are a number of different items available for purchase here from skins and paint jobs for your cars, to kart sets, characters, tour packs, and more. If you see something that you would like to buy and you have the available funds to buy it then be sure to buy it then as the items in the Pit Stop do frequently change. 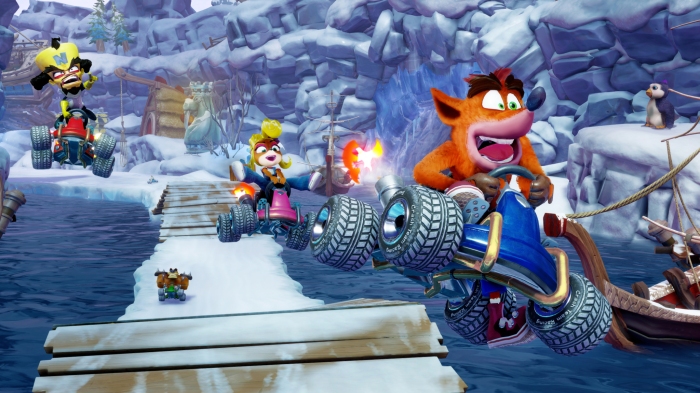 Last but certainly not least is the Grand Prix for the game. The first time you select this option you’ll be greeted with an episode of CTR TV where they will try and explain to you what is going on. Once you get past that you will see a progress bar on the screen and then a number of different challenges for you to complete. There are five different categories with “Quick Challenges,” “Daily Challenges,” “Weekly Challenges,” “Themed Challenges,” and “Pro Challenges” respectively. One of the quick challenges, for example, is simply getting first place in a race. A daily challenge might be something like scoring a total of 5 flags in “Steal the Bacon”. A weekly challenge could be something like beating your best time in Roo’s Tubes or hitting a total of 25 characters in Uku-Uka’s team. The themed challenges offer other things like finishing first in Twilight Tour while starting the last lap in last place or power sliding for a total of 180 seconds with Tawna. If you are up for it the Pro Challenges include the “Keep Nagging” challenge which means you have to hit every opponent with a Power Up while racing in Online Matchmaking or “Reverse Speeding” where you have to win a race while driving in reverse during the whole last trip. As you can see the difficulty of the challenges ramps up and if you are a completionist you might be stuck here for a while.

During my time with Crash Team Racing Nitro Fueled the game ran great. I didn’t have any issues from a performance standpoint. I had a little bit of a problem getting used to the controls though. The right trigger was used to accelerate in races but to back up I had to hold down on the analog stick, which is counter-intuitive. I looked around to see if I could map that to the left trigger like on pretty much every other racer out there but I wasn’t able to, so that definitely added a layer of tension to some races. When I went online and raced against random people my connection was solid and I didn’t notice any lag or hiccups. It ran smoothly which is something that doesn’t always happen so I appreciate it when it does.

Crash Team Racing Nitro Fueled is a really fun kart racer, especially on platforms like Xbox One or PlayStation 4 where you don’t have access to the Mario Kart franchise. My Mario Kart experience definitely helped me out here and I appreciate what the development team at Beenox brought to the table with this title. If you are a kart racing fan at all, be sure to pick up Crash Team Racing Nitro Fueled. There is a lot of fun to be had here and a decent amount of content to work through. Keep in mind though that it is probably one of the more difficult kart racing titles around.