In Injustice 2 you are fighting to save Earth from a villain that enjoys going around and destroying worlds in addition to fighting some people who used to be your friend but have since gone rogue. If you are a big comic book fan then you know who and what I am talking about and if you aren’t that statement should be vague enough to pique your interest without spoiling any of the story details. Personally speaking I always prefered games to comic books so I’m not familiar with a lot of the DC universe. Of course I know about Batman and Superman and those that tend to be in the mainstream. With that being the case I’m sure there were some revelations throughout the campaign regarding these characters that probably went over my head but I enjoyed it nonetheless. Injustice 2 is a game for both newcomers and veterans alike. NetherRealm Studios has done an amazing job here in what could possibly be the best fighting game that we see in 2017 and, arguably, the best fighting game we have seen in years.

To begin with there is the single player campaign that I alluded to up above. There are 12 chapters to go through with some of them branching off into different directions depending on the choices you make. There are times where you will be presented with a couple of different fighters and you will have to choose which one to fight with and then the story will proceed accordingly. Later on you can go back to that chapter and pick the other fighter if you so choose so that you can see everything the campaign has to offer.

Another single player mode that you can sink your teeth into is the Multiverse. That is where you use Brother Eye to observe and prevent potential threats that exist in different multiverses. Once you select this mode you will be presented with some different multiverses that you can jump into. As I type this review there is a “Never Miss” multiverse where I have to track down Harley Quinn and bring her back, dead or alive. These multiverses are timed though and this particular multiverse it is only going to be available for 39 more hours. Then I look to the other side of my screen and there is the “Kill Blow” multiverse that literally has two minutes left before it disappears. Fortunately I have already completed the objectives in that particular multiverse. The “main menu” for the Multiverse will also tell you the difficulty level of each one so you are aware of what you can do now and what you should try and do later, assuming the one you want to try is there later. Each multiverse has its own set of objectives that you are going to want to complete. Objectives range from completing a “Play Nice” event to completing “Little Looney” with a gold score to completing “Bad Attitude” with Superman and much more. There are different events within each multiverse and the game will tell you the suggested level you should be before trying to tackle any of the events. Additionally events do have requirements that you need to meet before you can play them. For example there is a “Nothing to Fear” event but in order to participate in it you need to have completed “Bad Attitude” first as well as having spent 1,000 credits. Once that criteria is met you are good to go. The Multiverse is a great way to level your characters up and get some more loot. If you are someone who likes to earn gamerscore then this is going to keep you busy for quite a long time as one of the achievements is going through 100 different events. I really enjoyed how this mode is kept fresh by how things tend to change every so often once a multiverse “expires”.

If you have some friends over at your place and you want to get in some Injustice 2 action there are multiplayer modes for both local multiplayer as well as online. The local multiplayer has three different modes for you to choose from. There is the standard versus mode. There is the AI Battle Simulator where you can create an AI controlled team and then challenge other players for rewards. There is also a Tournament function if you have a bunch of friends over and you want to see who is the best in your group. This was definitely a lot of fun to play and can make for some memorable moments and some nice trash talking within your group.

Then you have the online multiplayer suite. Here you have your standard modes such as private matches, player matches and ranked matches. There are also rooms where you can meet up with some other players to receive or send friend requests. I enjoyed this feature quite a bit as it made it really easy to coordinate with online friends and be able to get things set up with minimal hassle. During my time online with Injustice 2 everything seemed to run smoothly and I didn’t experience any lag at all. You also have the opportunity to customize your characters by creating loadouts and equipping gear that you might have earned by playing through some other modes.

If you have a bunch of friends that have purchased Injustice 2 and you want a place you can hang out together there is also the Guilds. You can’t use this feature immediately as you have to reach level 5 first (which is easy to do) but once you unlock this feature you can create your own guild or join an existing one if your friend already created a guild. There are a number of different reasons on why you would want to join a guild. There are daily and weekly challenges that you can complete as a guild. These will get you some guild mother boxes to decode, GP and guild credits. You can also get trophies (different from achievements/trophies on Xbox and PlayStation) that will give you more guild mother boxes and more chances to get some more powerful gear. Then there is the guild multiverse which works similarly to how I described above. Your guild will receive perks when there are 10, 25 and 40 active members. You can also have fights within your guild or fight other guilds online to try and get more trophies and basically improve your guild overall. It is a pretty cool feature in Injustice 2 and one I look forward to using with a bunch of my gaming friends. 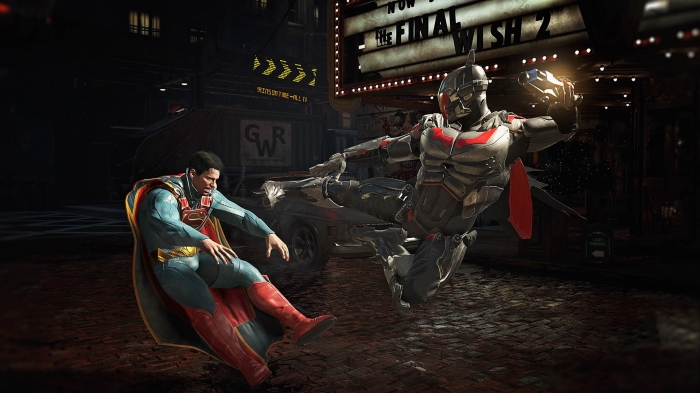 Other things in Injustice 2 include the ability to watch replays of recently played matches, editing your hero card and a few standard options. Once you go through the single player campaign you will have access to all of the chapters so you can immediately jump into chapter 5 and play that again if you want to, for example. What I really appreciated here is that they tell you the choice you made so you can replay it and see what happens when you make a different choice. For example your first choice occurs in chapter three. You have to pick which fighter you want to go with and then when you look through the chapter menu the person you picked will have a checkmark next to their name so you know to pick the other fighter next time. I love it when companies have the forethought to do this type of thing. Especially since there is an achievement tied to 100% story completion and you can only get that by going through every branch of the story. During my first playthrough of the campaign I fought in 51 out of 76 fights which gave me a good indication of what I needed to do during my second playthrough. Kudos to the development team here.

As you play through Injustice 2 you are going to notice how beautiful the game looks. The characters look incredible. The details on their outfits is fantastic as is the character models themselves. The detail in the faces and the expressions are great and the environments that you fight in really showcase whatever character it is modeled from. The audio is fantastic too as you hear the characters talk trash to each other or say one of their famous quips. I really enjoyed the arena transitions as well where you can knock your opponent off the map and into another one entirely. The story itself is really well done and, honestly, is probably done better than the vast majority of the DC cinematic universe. I really appreciated the authenticity here as well as the care and detail the team at NetherRealm Studios put into this game.

Overall Injustice 2 is without a doubt one of the best fighting games to come out in a long time. The fights are nice and fluid and just feel right. Each character seems to be accurately portrayed and their arsenal while fighting is what you would expect. The super moves can also be pretty entertaining to watch, especially if it turns into a finishing move as well so you can just kick back and relax and not have to worry about your next step. If you are a fighting game fan then you definitely need to check this game out. If you are a DC fan then this is definitely in “must own” territory. Be sure not to miss out on this incredible title and, hopefully, DC themselves will take some notes from it.