Forza Motorsport 6 is coming out in a couple weeks. Gaming Target was recently invited to sit down with it for a couple of hours to see how the game was coming along and to find out what we can expect once the launches on September 15. It shouldn’t be a surprise to hear that Forza Motorsport 6 is an absolutely beautiful game. It runs incredibly smooth at 1080p and 60 frames per second like the previous Forza titles on the Xbox One. Forza 6 features over 450 “Forzavista cars” that all have working cockpits and full damage. It also features 26 locales, more than 100 ribbons in total and much more.

When you first start up Forza Motorsport 6 you will immediately notice how pretty the game is. The environments and the track look really nice and the cars are insanely detailed. Forza Motorsport 6 also features weather and it can be pretty amazing racing through the rain with the cockpit view and seeing the water realistically hit the windshield as your windshield wipers keep going back and forth so your vision doesn’t get blurred. You’ll need to watch out for those puddles that are everywhere too because if you go over them to fast then you have a great chance of hydroplaning and losing control of your car (and potentially the race too!). The audio is also really crisp and clear listening to the cars roar down the track, the tires screeching on the road as you take that turn and more. 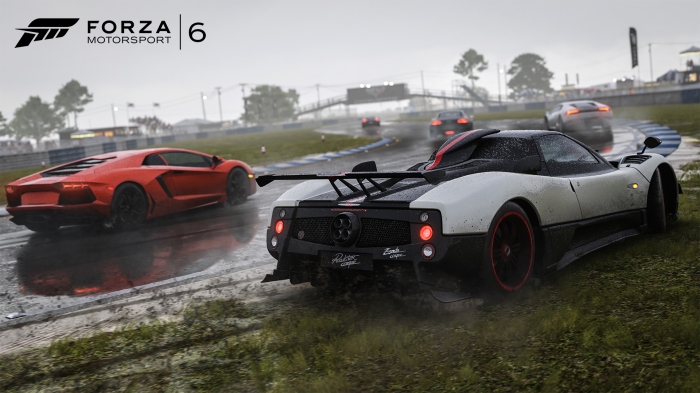 There are some brand new locales in Forza Motorsport 6 that include Daytona Motor Speedway, Monza, Brands Hatch and more. The tracks in the game are a mixture of real world locations as well as some fictional tracks. During my short time with the game the cars all seemed to handle really well and handle differently depending on the conditions of the track. Obviously if it was raining the track is more slick to you have to approach a turn differently in addition to kind of relearning that track so that you can avoid those rain puddles all over the track that will take you from first to last in the blink of an eye.

Another new edition to the Forza 6 is mods. Mods are tools that give you more of a challenge in the game. There are three different mods in the game with the “Dares” mods, the “Boosts” mods and the “Crew” mods. You can use them for a variety of things whether it be to increase your earnings, enhance your car’s performance and more. You also have different types of mods that have different rarity levels. Obviously the more rare the Mod you have is, the more of an effect it will have when you use it. There are three mod slots available to you before each race with some mods being available for only a one time use and other mods being more permanent. You can mix and match mods from different categories but there are certain limitations such as only one “Dare” mod a race or one “Crew” mod. You will have to think and strategize about how you want to use each one to give you an edge on the race track. It is important to note that these mods can only be used in career and free play modes. To ensure a level playing field these mods can not be used in Leagues, multiplayer or Rivals events.

Overall the brief amount of time I spent with Forza Motorsport 6 left a good impression on me. I’m excited to try out all of the new features that I wasn’t able to during my session. With so many cars and so many locales in the game it will take quite a while to see everything. The demo is now available on Xbox One so you should definitely download it and check it out. If you are a car guy you definitely won’t be disappointed.