Toy Soldiers War Chest is the latest game from Ubisoft in the “Toy Soldiers” franchise. In it you take command of an army of toy soldiers and try to defend your toy box from an invading force. This is a bit of a hybrid game in that you do have to build and maintain stations to help defend your turf but at the same time you can assume control of a turret at any time and start picking off enemies yourself. Once you do that enough you can use one of the “super” toys and the game basically turns into a third person shooter for a couple of minutes. If you want to extend that time there are Energizer batteries laying around the toy box that you can get so that you can keep going. You will be placed in different scenarios that you will have to face as well as some difficult bosses that will take you out if you don’t employ the right strategy. Overall it is a fun game but you have to pay attention at all times to what is going on or it might become a bit frustrating.

There are many different things you can do to keep busy in Toy Soldiers War Chest. First of all there is a single player campaign where you are put through a bunch of different scenarios and toy boxes and you need to successfully defend them from the enemy onslaught. Each one presents different challenges and potentially different strategies. It might take you a few tries to really figure out the best strategy. The next is the multiplayer/co-op portion of the game. There is split-screen and online co-op for two players as well as two on two multiplayer that will let you build your own turrets and as well as upgrade and/or control turrets of your allies. I had a lot of fun this and can definitely see myself playing it quite a bit with friends. There is also a Survival mode where you need to survive against waves of increasingly powerful enemies. That definitely kicks things up a notch as you have to be on your toes and monitor all of your turrets and everything else to see what needs to be repaired, what can be upgraded, how long you have to wait to get these things done and much more and there is even an achievement for being able to survive ten waves. Then there is the “Weekly War”. This is a set of five scenarios that you have to complete and it changes on a weekly basis. If you can successfully complete all scenarios you will get a nice reward. For me when I was going through this I had to stop GI Joe from invading my Toy Box. It is definitely a lot of fun and it helps to keep things more fresh. 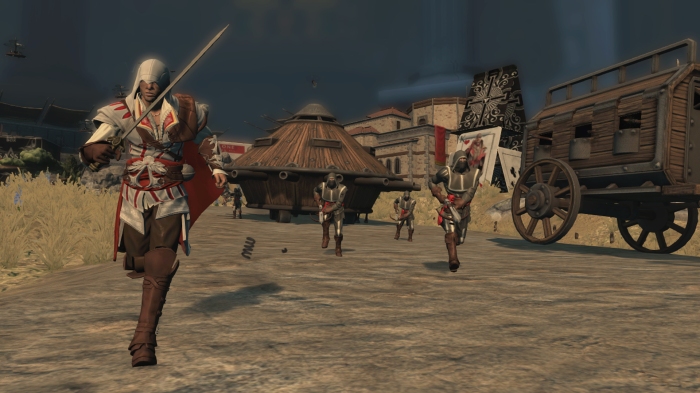 There are many different armies and heroes to select from in this game. You have Kaiser Wilhelm, Star Bright, GI Joe, He Man, Ezio from Assassin’s Creed and more. Each of these armies and heroes can be leveled up with campaign medals, the actual hero level, unlocks and more. If you are a completionist who will want to upgrade everyone and everything here you are going to be busy for a little while. Before you choose your army and your hero you can customize them how you see it. You can choose their primary weapon, secondary weapon and the barrage perk. You will obviously not start out with a whole lot in the beginning but as you play more of the game and accomplish more objectives you will earn money to be able to unlock more powerful weapons and more powerful forms of defense. I really enjoyed upgrading the range of my weapons as that would help me take out enemies that were still pretty far away before a whole team of enemy soldiers could overwhelm any of my turrets. There is also a store in the game that you can spend your hard earned in-game currency on. There are different boxes for you to purchase. You can purchase the “Kaiser Box” for example which is a box containing three Kaiser toys of your Hero’s level. If you want to go to the next level up there is the “overstuffed box” which contains three three Kaiser toys and two random toys of any level. There also is the option to purchase coins with real world money if you choose to go that route but it is by no means a requirement. I was able to purchase everything I wanted in the game simply by playing it. If you want to take the shortcut though you can get 2,000 tokens for $1.99 all the way up to 26,000 tokens for $19.99. Again though you don’t need to do this to get the in-game currency. You can earn all of that and more by just playing the game.

I have had a lot of fun during my time with Toy Soldiers War Chest but I do have a couple of issues with it. For starters the loading time is far too excessive. When you first start up the game you are going to be sitting there for a little while. Other times when the game is trying to load another scenario you are probably going to have enough time to get up and grab a drink. There really is no reason for this as while this game does look very nice it isn’t like it is a graphically taxing title that is really making your console work. The other issue I had was with some of the AI characters. They don’t seem to know how to prioritize properly. When you build a turret you have the AI man control of that turret and take out enemy forces. At first they do a great job and if you can the timing and strategy down with managing all of your different weapons then they are great. The problems arise when some enemies start to get past your defenses a bit and are getting close to invading your toy box. This is when the AI can run into problems not being able to prioritize what it needs to do. There were many times where it simply face forward and try to eliminate the enemies in the distance that were getting closer instead of swinging around and killing off the enemy that was about to invade the toy box. On multiple occasions I had to take control of the turret myself and take out these enemies before they successfully entered my toy box. The toy box is tied to your health in the game and starts at 100. Each time an enemy soldier successfully breaches your defense and enters it your health goes down one point. If an enemy vehicle or something enters it goes down much quicker so you have to be vigilant about not letting enemies in to it and the AI wasn’t always as smart as it needed to be. There were multiple instances where the best course of strategy was simply doing it yourself.

Toy Soldiers War Chest is a really fun title. It is the third entry in the franchise and so far I have enjoyed all of the them. The tower defense mechanics mixed in with shooter elements is a really fun formula and I enjoyed all of the different licenses that Ubisoft was able to get from the game. I’m sure a lot of us grew up on GI Joe and it was fun being able to take control of the GI Joe army as well as play against them. If tower defense is a genre you enjoy I highly recommend this title. Even if it isn’t I would recommend you trying out this game as there is more to it than simply being another tower defense title and you might end up really enjoying it.