The Wolf Among Us Episode 2 is here and it has picked up right where the first episode left off. There has been another murder in Fabletown and it is up to you to solve the case before any other innocent Fables get hurt. The Wolf Among Us is a point and click adventure game where you play as Sheriff Bigby, the Big Bad Wolf from fairy tales, only in human form. Episode one ended with the cliffhanger of a severed head laying on the steps of the building where Bigby lives and works.

The Wolf Among Us is another game from Telltale where your choices will have consequences as you continue to go through the first season. There are going to be a total of five seasons so I haven’t felt too many repercussions yet for my actions but I have no doubt some are coming. There was one instance where I had a choice of where to go next and by making that choice I chose whether someone lived or died without even knowing it at the time. That decision should definitely have an impact as we get further into the season and I am excited to see what happens. With Episode 2 you are trying to track down the man responsible for the recent murders in Fabletown and the investigation takes you to a number of different locations. Throughout the episode you get plenty of opportunities to show what kind of person you want to be. Due to his reputation and actions in the past, there are people who are scared or simply do not like Bigby. You can reinforce those sentiments by being an asshole and trying to proceed in the game at the expense of others or you can be a bit more tactful and try to get your results by being nicer and getting the residents of Fabletown to trust you. I chose to go the “good” route as it seemed like things would be easier if people trusted me and were more willing to give out information. 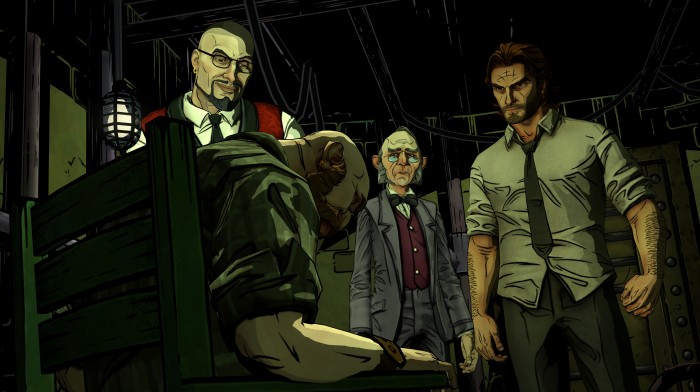 As you proceed through the episode you will come across characters you dealt with during the first episode and their behavior toward you will reflect your actions from back then. You will want to try and explore all of your options to unlock all of the different fables in the game, sometimes having to play an area twice where you are forced to make a decision and live with the consequences. In addition to the point and click nature of the game there are also QTEs that are used if you happen to get in a fight with someone. The results of these fights will also have an impact on what happens later whether people gain respect for you because you showed mercy when you didn’t have to or whether people view you as a monster because you ripped someone’s arm off. These are decisions that need to be made almost instantaneously as well so you don’t really have time to sit there and contemplate the potential ramifications of your actions.

I have been going through The Wolf Among Us on the Xbox 360 and while I have been really enjoying the story, the game’s engine is terrible. Telltale really needs to work on optimizing their game engine and I’m hoping it gets better as more episodes are released. It runs really poorly, suffers from an inconsistent frame rate and, at times, the audio and video are briefly out of sync while everything loads. There were times when I would be looking at a black loading screen while the characters in that scene would begin speaking. It got to be pretty annoying as did the few instances where the game almost turned in to a slideshow for a few moments. I really am enjoying the story and after seeing the cliffhanger that ended episode two I am anxious to see what happens in episode three. I really hope the engine is much better by then though.

The Wolf Among Us so far has been an enjoyable ride. I am enjoying the story and all of the nods to the different fairytales being used throughout. The art style is very unique and interesting and seeing Telltale’s interpretation of some of the locales we know from these fairytales is pretty cool. If you enjoyed The Walking Dead from Telltale then I recommend that you give this game a shot as well. Despite the technical shortcomings it is a fun experience and I can’t wait to see what happens as a result of my choices throughout episode one and two.