Rare Replay is a collection of nostalgia for gamers who grew up in the 80s and 90s. It has a plethora of games and content that starts with the 1983 title Jetpac and goes all the way through 2008 with Banjo Kazooie: Nuts & Bolts. It should be noted though that even though Rare Replay is a celebration of games from Rare over the past thirty years, it doesn’t include every single game they have done. All of the Kinect games that Rare has done, for example, are nowhere to be found in this collection. You also won’t find games like Donkey Kong Country here for obvious reasons. Games that are found in this collection though are legendary Rare titles such as Battletoads, RC Pro Am, Killer Instinct Gold, Conker’s Bad Fur Day (the unedited N64 version) and more. This whole collection is essentially a love letter from Rare to its fanbase and it is an amazing way to see where it all started with Rare and how they developed over the course of the last thirty years. 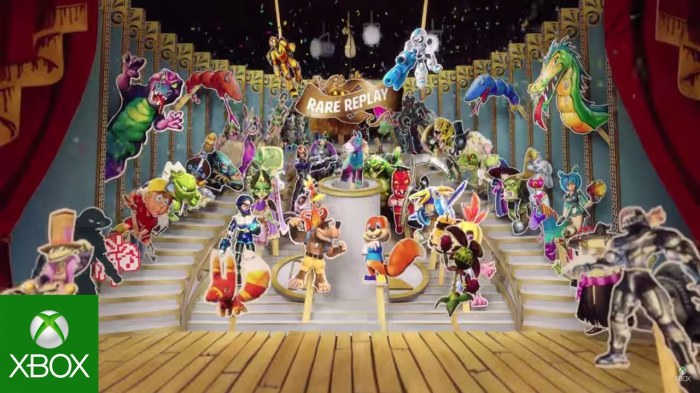 In addition to the games themselves there is a plethora of additional content for you to check out. There is the “Rare Revealed” where you can revisit some of Rare’s history. There are featurettes that explore the history and culture of Rare. There are “making of” videos to watch for some of their best games. There are also concept showcases and an exclusive look at unreleased projects and ideas and finally “top-secret tunes” where you can listen to previously unheard music from across the years. With that said you have to earn the opportunity to view these items. The way that you unlock this stuff is by earning stamps by playing the games. Each game has milestones for you to hit. In Battletoads one of them is to kill 500 enemies over time. Once you reach that milestone you will earn a stamp. You also earn stamps by completing snapshot challenges. These are bite size segments where you must complete a certain objective and there are two ways you can play these. You can play the Snapshot challenges in any order you like or jump on to the Snapshots Playlist where you will have to take on back-to-back Snapshot challenges with limited lives. In Cobra Triangle, one of the snapshot challenges is to “race through the desert and score at least 5000 points in 60 seconds.” If you successfully do that you earn a stamp. Each stamp card has six slots. When you earn six stamps you move up to the next level. There are a total of 330 stamps to be earned throughout the collection. If you want to see everything the collection has to offer you are going to want to earn all of these stamps. A video featurette showcasing “The Faces Behind the Voices” requires you to be at Rank 12, for example. It is a really interesting way to showcase some of Rare’s history by having you play the games that made them the developer they are today and being rewarded by seeing a bunch of the “behind the scenes” material. It does need to be noted though that the “snapshots” are only available for games that game out before the Nintendo 64 era. They aren’t available for games beginning with Killer Instinct Gold as well as any game that came out after that.

The games themselves play just like they did when they were released, which could be either a good or bad thing depending on your perspective. For me I enjoyed the major nostalgia trip I was going through as I was trying to win a race in RC Pro Am. I remember spending many hours playing that on my NES as a kid. The controls definitely take some getting used to though as it still controls like it did back then. I mentioned the “snapshots” up above which also serve as a great way to learn the mechanics of a game you might not be familiar with for these older titles. In addition to having to learn how to control some of these old games, there are a couple of different ways you can play them. You can, of course, play these games as they were meant to be played. Some games though have cheats that you can turn on if you want to go down that route. For Battletoads you can go into the game options and turn on infinite lives. If you are playing Digger T. Rock you can go into the options and turn on both infinite time and infinite lives. In Underwurlde you can go into the options and turn on both infinite lives and no enemies. Not every game has cheats like these but they are interesting ways to put a bit of a new spin on these classic titles. Multiplayer also appears to work with the games that launched with it. I was able to play an online match in Perfect Dark Zero, for example. There is also local multiplayer for games that supported that as well.

As far as negatives with Rare Replay are concerned, there aren’t many. I briefly mentioned the odd way they structured the game up above, how you can launch the Xbox 360 games in this Rare Replay collection without using Rare Replay itself. This is because you are essentially using the backwards compatible versions of these games, so those who aren’t in the preview program will get a small taste of how that feature works. That certainly isn’t a negative but I just found it odd. There are going to be people disappointed that you can’t earn a true 10,000 gamerscore here if you have already played some of these games on the Xbox 360. It would have been nice if these were all treated as Xbox One games as far as achievements are concerned. There are some of the 360 games that have a framerate hiccup every once in a while but that is due to the backwards compatibility feature not being finished yet and should improve as that feature gets closer to being done.

Rare Replay is a fantastic trip down memory lane. If you are a gamer that grew up in the 80s and 90s you should get a kick out of revisiting some of these old classics. They run just like they did back in the day when they were released so don’t fool yourself into thinking all of these games will run like games today. For me though they don’t need to. I had a tremendous amount of fun revisiting childhood memories by playing RC Pro Am, Cobra Triangle, Banjo Kazooie and more. I can definitely see myself playing Rare Replay for a long time to come and the value of this bundle is undeniable.