Powerstar Golf is available on Xbox One and is a really fun game to play whether you are alone or with friends. If you aren’t a golf fan you can still find a lot of fun to be had here as Powerstar Golf is much more of a casual golf game, more towards Hot Shots Golf than Tiger Woods PGA Tour. Sadly there is no traditional online multiplayer, however, you can break records that your friends set and also compete with their playthroughs in Rivals mode. In addition, Powerstar Golf offers quite a bit of customization and you will unlock different and fun locales the more you play.

Powerstar Golf offers four different modes to play. There is free play which is essentially your exhibition mode. In career mode you will play in different events and gain experience while you are playing. There will also be certain objectives that you have to meet and, assuming you meet those objectives, more courses and new locations will open up. Then there is local multiplayer where you can select either match play (2 players) or stroke play (2-4 players). Finally there is Rival Mode where you can take on a friend’s round of golf to try and beat their score. Essentially what happens here is that when you play a round of golf your score and everything else is basically “recorded”. You can go into Rivals Mode to see which friends have rounds you can challenge. Once you select the person you want to play against then the round of golf starts with you playing as your golfer and the computer replicating what your friends did during their round of golf. I found it annoying that I couldn’t play against friends head to head online but at least you can somewhat play against them in this manner. If you win then you will earn experience points, however, if your friend’s golfer wins then they get the points. Yep, you can earn experience points and credits when you aren’t even playing the game. There is even the “Sleeping Giant” achievement where you earn XP when not playing the game. I will say one annoying thing about Rivals Mode is the time it takes to bring up your Rivals list. The loading time in this one area is unacceptable but it is just fine in other areas of the game which is weird. 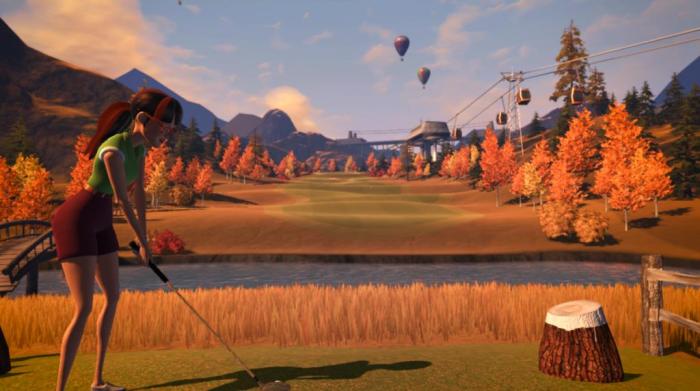 The level of customization in Powerstar Golf is pretty nice as you can choose the equipment you use, the outfits your golfer wears, the perks that are equipped and more so you can get the most out of your experience. You can even “borrow” a friends caddie while you play if you happen to like theirs more than your own. Although you don’t have to share your caddie if you don’t want and you can turn this feature off and on with the press of a button. If you want to get a head start you can also purchase up to 140,000 credits using real money with the Powerstar Golf Credits Pack. This will allow you to purchase either Boosters, an amateur pack, pro pack, elite pack or an extreme pack. With each pack you get random items such as better golf clubs, better golf balls, different outfits and more which could help tip the scales in your favor.

As I mentioned up above you can also break your friend’s records and show off your own skills. Before you hit the ball you are shown what your friends have done in that same instance. If someone has driven the ball 210 yards and you drive it 215 yards then their name will disappear and your record will be the one showing up on the course the next time they play. You’ll also don’t have to be friends for records to show up. If you are a follower you will also see their records too. There were many times when I saw a record Major Nelson had set and a few of those times I broke that record. It is a fun little way to show up your friends and with Upload Studio on Xbox One you can even record your feat and provide your own voice overs.

Powerstar Golf is a fun game. There are a couple of things that prevent it from becoming a great game such as the lack of true online multiplayer and the courses feel rather uninspired. The gameplay itself is a lot of fun and is a bit reminiscent of the Hot Shots Golf franchise. If you like gaining experience and really tweaking your character then you should have fun here. The Rivals mode should also provide some fun moments, especially with the Xbox One’s ability of recording that hole-in-one you just made, and then being able to upload it to taunt your friend and show off your skills. For me Powerstar Golf is going to be one of those games that I return to when I don’t really want to do anything too serious and I just want to screw around on the golf course and work towards some achievements. Hopefully though, if there is a sequel, there will be a few more features to mess around with.