MLB 14 The Show for PS4 is the first entry in Sony’s long running, award winning franchise to hit the PS4 and it hits all of the right notes, for the most part. It looks amazing and just like a game does that you watch on television. It also gives you a wide breadth of customization options so you can have the experience you want and offers plenty of content to keep you busy whether you are playing offline or online with friends. There are returning favorites such as Road to the Show, Home Run Derby and Franchise along with some changes to try and help take advantage of the PS4 hardware.

Sports games can be hard to make year in and year out due to the fact that you really can’t change the sport or the core mechanics so the development team must focus on other things. For those who think it might take to long to go through a full nine innings the team over at Sony San Diego has introduced Quick Counts. As the name suggests this allows you to get through a game quicker than you normally would. This is achieved by removing some animations, not quite having the television style broadcast and more. It is more straight and to the point. For example, when you have quick counts enabled every at bat will start in a mid or late pitch count. As a pitcher I would begin against one batter already with a 3-2 count or, as a hitter, I might begin my at-bat appearance with a 2-2 count. The situation that you are placed in appears to be random but it definitely helps move the game along at a speedy pace. Personally speaking I prefer to have full control over my games and don’t know how much I will actually use the quick count feature but it is great for those who want to use it.

While I am on the subject of control there are also two difficulties here. There is the beginner mode where all you have to worry about is hitting and pitching. When you are at bat all you have to concern yourself with is hitting the ball. The AI will then take over and decide whether they want to try and stretch a single hit into a double, whether they want attempt to steal a base or anything along those lines. As a pitcher all you need to do is worry about pitching. If the batter connects with the ball and sends it to deep left field the AI will take over and have the left field run over to catch the ball. For those who are experienced with this franchise (or for those who simply want to control everything themselves) there is also veteran mode which gives you control over anything. You determine when how and when your runner goes and it will be up to you to field a ball and throw it to the appropriate base. This is probably the option the majority will go with but it is nice to have the option for those who just want to play casually.

Another addition to MLB 14 The Show is one that fans have been requesting for years and that is the ability to bring your saves over to the next game. Now, beginning with MLB 14 The Show, you will be able to do just that with the year-to-year saves feature. This will complement the existing cross save feature which will allow the time invested in MLB 14 The Show to be transferred over to MLB 15 The Show next year. For me personally this is an exciting feature and one I hope that all sports games will implement. Imagine putting in hours and hours of work on your team and/or player and then being able to take them over to the next year. There have been similar things in the past where you could import your NCAA character in to Madden but this is a bit different.

Online Franchise has also arrived which will allow you to share with friends online most of the features from the offline version including Scouting, Free Agency, the Amateur Draft and CPU trades. It will remain customizable so that you can play how you want and put yourself in whatever situation you want with all of the commissioner options. You also have Diamond Dynasty Extra Innings where your team is always looking to challenge other players in an offline setting which will allow you to earn bonus rewards the next time you log in. When you are online you have the opportunity to challenge other user-created teams in an offline game where the AI will control their team.

Community Challenges have also made their way to the show where you will be able to toy and finker with scenarios and game situations as you see fit. It doesn’t matter whether it is where the ball is hit, what the inning is, what the scoreboard says or who is on base. These creations can also be put with a set of goals and then you can challenge the community to do just that. This will theoretically provide endless content for hardcore players and I know I had a lot of fun coming up with different scenarios as well as trying some that other people were able to dream up. 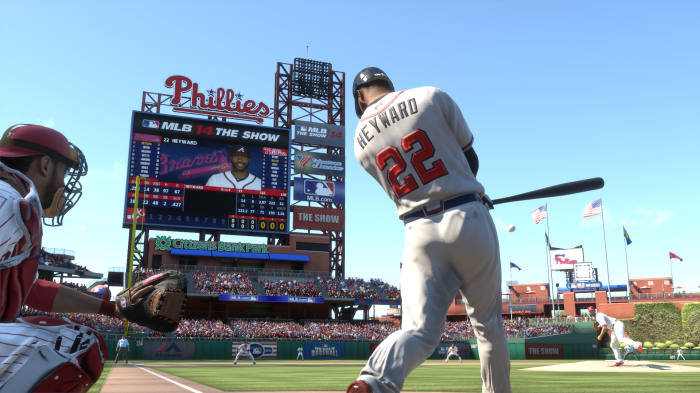 I have been talking a lot about some of the new features for MLB 14 The Show but there are also a bunch that are making a return. You can immediately jump in to the postseason if you so desire, there is a challenge of the week and the home run derby is back as well. Road to the Show is obviously back where you can focus on your player’s path to the major leagues. If you happen to make a good play you can also use the PS4’s share function to upload a video of what you have just done and edit it how you see fit. Using the recently released Share Factory will make your video look even better and I expect to seem some really nice videos coming from the community.

Aesthetically MLB 14 The Show looks amazing. All 30 of the MLB Stadiums have been completely rebuilt to take advantage of the PS4’s power and it really shows. Some of the technical aspects include textures being 4x more than the PS3 version as well as each scene jumping from around 150,000 polygons to over a million on the PS4. In short, the game looks the best it has ever looked. The audio is done really well from the commentators, to the umpires to the crowd who would randomly shout phrases like “Let’s go San Francisco!” when I was playing AT&T Park. The whole game really is a sight to behold and I even had someone come up to me and ask which game I was watching and they were surprised when I told them it was a PS4 game and not an actual MLB game.

I have gone over how great I think MLB 14 The Show is, however, there are a couple of complaints I have as well. The loading time in this game borderlines on inexcusable at times. There are instances when something only takes a few seconds but then other times when I’m sitting there for a while waiting for the game to load. There were a couple of instances where I thought the game might have frozen up on me. Now I am using the disc version so I don’t know if the digital version is better about this but I am hoping this gets improved with future patches. Also, as beautiful as the animations look in the game, there were a few times where they went crazy on me. One time in particular was after i pitched a ball and someone took off from second trying to steal third base. The animation of my catcher trying to throw the ball to third base got hung up and by the time I was able to throw the ball to third the runner was already safely there. There were also a couple of times the framerate seemed to dip a bit but it didn’t hamper my gameplay experience at all. It just briefly took me out of the experience. This didn’t happen a lot but it sure was annoying when it did occur. I did also experience a bit of lag while playing online but it wasn’t a consistent thing. There were times when there was some lag and some other times when it ran flawlessly.

MLB 14 The Show is a solid first entry on the PS4. It looks stunning and for the most part plays like it too. Sony San Diego has done a fantastic job bringing their popular franchise to the new generation of consoles and I am excited to see what they will do over the course of this generation. If you are a baseball fan then you definitely need to pick up this game. It is a tremendous amount of fun whether you are trying to polish your skills in single player action or taking on your friend across the country. The virtual diamond awaits and things have never looked better.