InFamous: Second Son is arguably Sony’s most anticipated game within the PS4 launch window and is Sucker Punch’s first chance developing for the PS4. InFamous: Second Son is a tremendous amount of fun, however, it does have some issues. The graphical fidelity is stunning and the draw distance is amazing. The game runs and controls really well for the most part and the development team did a great job of recreating Seattle for Second Son. The game does have a few problems though with a lighter than anticipated story as well as some traversal issues and pacing during one part of the game.

The events in inFamous: Second Son take place after inFamous 2. Cole McGrath is nowhere to be seen and is replaced by Delsin Rowe. Living in a small community outside of Seattle, the game picks up as Delsin is causing mischief wherever he can. It isn’t long though before events start to get out of control and you meet the D.U.P. for the first time. The D.U.P. is the Department of Unified Protection and is the group responsible for capturing conduits (a.k.a. bio-terrorists) so that they don’t wreak havoc and kill everyone. That is the line that the D.U.P. feeds to the general public anyways to try and get them afraid of the conduits so that the citizens of Seattle welcome the occupation of the D.U.P. throughout the city. 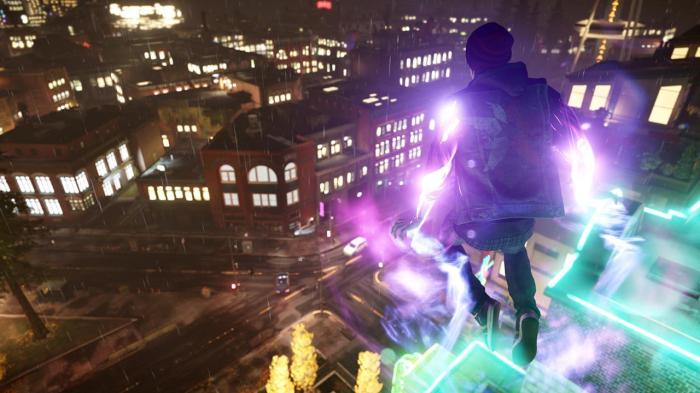 I enjoyed the story that Second Son was telling and I was disappointed that there wasn’t much to it. They could have went some really cool places with it in my opinion and, yet, it felt limited. The gameplay is obviously open world so that isn’t limited but the story could have been a lot stronger. Maybe that is simply the result of trying to make sure that Second Son came out towards the end of the “launch window” for the PS4 or maybe they will include more story content in DLC, I don’t know.

The gameplay in inFamous: Second Son is fluid and generally works really well. There are some times when Delson doesn’t grab a ledge when he should or when I tried to climb up a ladder in the early parts of the game and he had trouble grabbing on to it but overall it runs really well. As you absorb more powers you can begin to get places quicker and become more powerful. With your new powers comes new tricks with my favorite power being the third one you get later on in the game (don’t worry, no spoilers). That is the one I ended up using the most once I was able to and it helped me get through some big battles.

When you aren’t engaged in battle with the D.U.P. there are other things to do in Seattle as well. The team over at Sucker Punch did a great job bringing Seattle to life and you can clearly see the different districts of the real Seattle that were included in this game. Obviously the Space Needle is in the game which is easy to spot but there was also a spot downtown that I recognized due to me having stayed at hotels in that area in the previous years when I attended the PAX conventions. The shards make a return in Second Son and, fortunately, they appear on your map so you know where to find them. The caveat to that is that you need to clear out the D.U.P’s mobile command unit in each section first before collectibles and other events begin showing up on your map. In addition to the shards there are random instances that take place in the city such as having the opportunity to eliminate some drug dealers, save a fellow conduit that is being attacked by a group of people, disrupt a rally and more.

There are both good and evil activities that you can participate in that are highlighted by blue and red respectively. The decisions you make as you go through the story are highlighted in the same fashion. There really are only a few big choices for you to make as you go through the game and they are clearly labeled. If you are going through the story trying to be a hero all you have to do is pick the blue option when prompted and if you want to rule with an iron fist all you have to do is pick the red option. There is no ambiguity here which would have been nice to see. One of my favorite activities was the stencil art locations where you spray paint an image on a surface. To do this you hold the DS4 sideways and then shake it, causing Delsin to shake the can of spray paint he is holding in the game. Then, utilizing the sixaxis, you spray paint over pieces of paper with cutouts until you form an image. If at any time your spray paint is running out simply shake the controller again to get some more. It is a really clever use of the Dualshock 4.

With inFamous: Second Son being an open world game there is quite a bit of side quests to do as I alluded to above. That means there are a lot of stats and Sucker Punch has done a great job here. By pushing the Options button (a.k.a. the Start button) it brings up a map of Seattle and you can see the different districts. Simply highlight a district and it will tell you how many D.U.P. cameras you need to find, how many tracker drones are still in the area and various other things. It is a great way to keep track of your progress in all of the different areas.

If you are a trophy hunter this really helps get some of those side quest trophies, such as collecting all of the shards in the game. For those that are interested inFamous: Second Son also features a really easy platinum trophy to get but it will require going through the story twice. If you don’t care about trophies you will still want to collect as many shards as you possibly can so that you can upgrade your powers. Once you learn a new power, the way you upgrade it and learn new moves utilizing your new power is by using the shards you find the in the game. You can unlock abilities such as getting some health when you subdue an enemy that has surrendered instead of killing them or being able to double jump in the air and various things like that. I enjoyed the upgrade system and it keeps you engaged as there are a few things that you can unlock until you reach your maximum karma level, whether that be as a hero or as a villain.

Earlier on I mentioned there was one part of the game where the pacing felt off and that was during one of the boss fights. There is this part where you go in a basement and you end up in this huge boss fight where your enemy towers over you and you need to jump from platform to platform so you don’t fall in the lava while trying to shoot him and his protectors so you can get his health down. Your powers do eventually run out though so you need to go get a recharge and while you are doing all of that this boss character has an over-powered laser that he fires at you and, if you aren’t careful, can easily wipe you out very quickly. It was an aggravating boss fight and the only rage inducing part of the game I experienced. I was very happy when it was finally over and even happier after I beat the game and saw that there weren’t any other parts like that. There are certainly other boss fights in inFamous: Second Son but that one just seemed out of place and poorly done, in my opinion.

I have been looking forward to inFamous: Second Son for quite a while and generally speaking Sucker Punch did not disappoint. I outlined the issues I had with the game above but I really enjoyed myself and will definitely continue to play this game. It is a great PS4 exclusive and really highlights some of the capabilities that the PS4 has while barely scratching the service like all launch titles do. Seattle is beautifully rendered and always feels “alive” with citizens always around you either cheering you on or running from you in fear. I have always had fun with the inFamous games but I still feel there is something that is holding them back from being truly great and I hope the next title in the franchise really nails it. I look forward to playing the next entry whenever it arrives and it will be interesting to see if Delsin makes a return or if we will have a new protagonist. If you have a PS4 though be sure to check out inFamous: Second Son. You will definitely have a lot of fun.