Driveclub is Sony’s first attempt at a big new racer on the PS4 but unfortunately some bad design decisions and worse execution have made for a somewhat lackluster experience. One of the key points we were repeatedly told about Driveclub was how this was going to be a big, socially connected racer that we could play with our friends and then the game comes out and I find out there are only six people allowed in a car club. Six people, really? Not that I can really experience to much of what the “club” portion has to offer because Sony’s servers have been down since launch. It isn’t all bad though. Driveclub is a very pretty game and you’ll admire the environments as you are racing through them. It has a nice day and night cycle that really shows off just how nice the game looks. That said though the dynamic weather system isn’t here and will be introduced at some point later on in a patch. The cars seem to handle pretty well and, for those who care, the majority of the trophies seem pretty easy to get as well.

When you first start up Driveclub you are greeted with a nice looking cinematic and are then brought to the main menu. This is the central hub for the game where you can decide whether you want to participate in events, create a club, browse clubs already created, issue and answer challenges and more. Selecting the “drive” category allows you to dig a bit deeper and select whether you want the “tour,” “single event” or “multiplayer”. The tour is essentially the “campaign” for Driveclub where you participate in a number of events and try to earn stars. You earn stars by completing objectives within a race. Before writing this review I just completed a time trial where they wanted me to finish the course in under three minutes and five seconds. Once I did that successfully I earned a star which is a form of currency. There are a number of events open to you in the beginning but for the more advanced events you will need to have the required number of stars. In the beginning you can participate in a mountain dash, for example, but if you want to participate in the Pagani Drift you are going to need to have earned at least 146 stars. The tours are broken up by difficulty as well ranging from Rookie to Legend.

If you choose to go the Single Event route then you have the option to pick one of three events whether it be a standard race, a time trial or a drift. A standard race and time trial should be self explanatory but for those who don’t know about drift, you score points by drifting in the “Drift Zones” and driving fast in the “Speed Zones.” Then of course there is the multiplayer component, however, after waiting four days for Sony to fix the Driveclub servers, I still haven’t been able to experience this part of the game except for a brief period of time. I experienced it really briefly as I received my review copy from Sony before the game went live for everyone else but that was only a brief experience before everything crashed. I was able to create a car club before the servers imploded but haven’t been able to use it since. Even the car I created for club use was inaccessible since I needed the Driveclub servers to use it. There are a good number of games that have problems with their servers on day one which is why I decided to wait a few days to see if things would improve. Sadly they haven’t and this game has really suffered for it.

During the brief time I was able to utilize it I issued a challenge to someone on my friends list. By doing this I am challenging my friend to try and knock me off the top of the leaderboard. Unfortunately I can’t go into too many details about how well this mode works because of all the server problems. One thing you do have access to is the garage. This is where you can look at the cars you have unlocked and change their paint job. That’s it. You can somewhat create a custom paint job but your hands are tied as far as doing anything with the car.

While going through a number of different races I noticed that the AI has problems too. It is incredibly rigid and seems to always stay on the same “line,” no matter what. You could cross into a path that was set for the AI and they will completely ram into and not even try to compensate to avoid the collision. This highlights another poor design decision where you can get penalized in this game for doing nothing wrong. There were times where I was racing down the track ahead of everyone and I was racking up points doing so. All of a sudden an AI controlled car comes out of nowhere and hits me causing me to be penalized and losing points. It can be incredibly frustrating when you are having a clean race but then get hit by another car (something totally out of your control) and you can get penalized for it. I really don’t know who thought that was a great idea.

Driveclub is not quite a sim but it isn’t as arcadey as some people might expect either. It does a nice job of walking that line and will punish you if you screw up. If you are trying to pass someone on the inside of a turn and accident hit the dirt then you face the possibility of getting penalized for cutting corners. If you slam into a wall then you will get penalized for impacting the track. I don’t really have to much of a problem with this as it forces you to try and be a better driver. Driveclub is pretty much about circuit racing where you need to stay on the track instead of the open world racing some recent racers have done. With that said said there are a number of different locales that you can race through. There is Canada, Chile, India, Norway and Scotland. Within each locale there are a number of different tracks that show off that geographic region. They did a great job of capturing the different regions and making each one feel different than the others so you don’t get the feeling of repetitiveness. 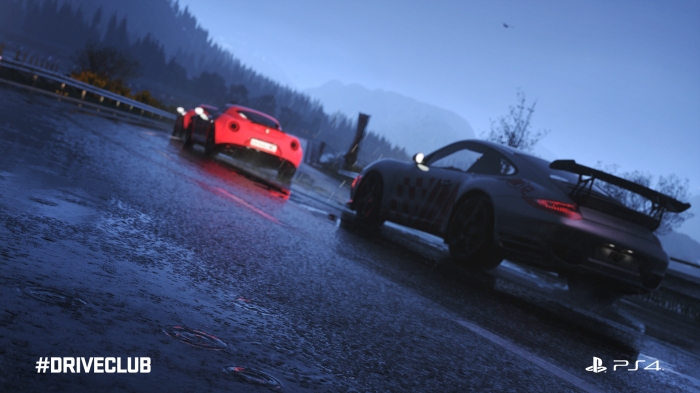 Driveclub has stumbled out of the gate in a big way but I have no problem believing the servers eventually get fixed and we can then play Evolution’s full vision. The game was released partially broken though, even after giving them an extra few days to get everything right. With that said though Driveclub really isn’t the complete socially connected racer that we were promised. How am I supposed to be able to race together with all of my friends when there are only six people per car club? There are just some things that feel really “bare bones” about Driveclub but I think it is a good foundation for a potentially fun series if we ever do see a sequel. I just hope that next time the only thing crashing and burning is the cars on the virtual race tracks.