Dance Central Spotlight is here bringing Harmonix’s popular dancing franchise to Xbox One. This version of Dance Central is a little bit different though. The core gameplay mechanics are the same but this time around, Dance Central Spotlight is available on Xbox Live for $9.99. For that price you get ten songs that come with the game and then you can buy any other music you want for $1.99 each. By going this way you don’t have to buy a game where you might only like half of the songs. Now you have more control over the content in the game.

Dance Central Spotlight still features the core game but it also features a dedicated fitness mode. This fitness mode has quite a few different options so that you can control what you are going to do. You start out with selecting how long you want your routine to be. The shortest amount of time is ten minutes with 90 minutes being the longest. Once you have decided how long you want to work out for you have the option of choosing what kind of routine you want to do. There are eight different routines, however, they all aren’t unlocked at the beginning. You have your “Beginner,” “Standard” and “Deluxe” routines but also routines that focus on Cardio and Strength as well. With the routines you are managed to choose more than one to really get a good workout done. After that you need to tell the game how tall you are and how much you weigh so that it can accurately monitor you through the fitness routine. When you start you’ll immediately see how much time you left in the routine and how many calories you have burned up to that point. I really liked how they did that as it makes it really easy to keep track of your progress as you are going through the different routines. 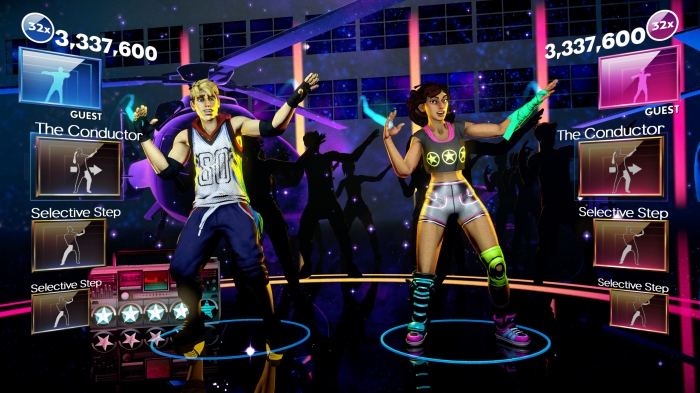 There are some other changes with this new iteration as well such as the lack of competitive multiplayer and no story. This isn’t surprising at all giving that this isn’t a full fledged $60 experience like the previous games in the franchise. I did feel the need to point it out though for people who weren’t aware. With that said though Dance Central Spotlight is still an enormous amount of fun. It is extremely accessible and encourages everyone to get up and bust a move by not having a fail state and allowing you to just have a good time. For those you want to advance to tougher challenges, there is a progression system. When you begin each song will start you out on Beginner. The way that you get to the tougher challenges is by collecting enough dance cards and the way you do that is by getting a “Flawless” rating on dance moves. This type of progression system works really well in my opinion as those of us who are really good dancers can easily advance to the harder challenges while others who just want to have fun don’t have to worry about failing and getting a game over in the middle of a song.

If you just can’t seem to get the moves down right you can simply say “Hey DJ, practice that” and you will immediately be brought into a practice mode. While you are here you can practice your moves at the normal speed or, if you want, really slow it down so that it is easier for you to put everything together on the dance floor. With the new Kinect on Xbox One, it has no problems detecting you and it will track whatever movements you make. What this does is give you instant feedback on what you are doing wrong and what you are doing right. I found this to be very helpful and it makes you a better dancer overall.

A little earlier I mentioned the lack of competitive multiplayer but there still is co-op in the game. If you want to start a co-op game all you have to do is give a high five to the person you will be dancing with and then Kinect will recognize that and begin the party. There is jump in/jump out co-op as well so if you need to go take a phone call or answer the door you don’t have to worry. If you are dancing and have to leave for a moment Kinect will readjust accordingly and then, once you have returned, it will adjust once again without ruining the motion or flow of the song.

Dance Central Spotlight is a really fun game to play with friends or to use as a supplemental exercise tool for your daily regimen. If you combine this with Xbox Fitness then you will get in great shape in no time or stay in great shape if you are already there. I do like the a la carte approach Harmonix took with this game where I essentially control the music that is in the game and I can just ignore everything else. The progression system works well and caters to everyone. If you are looking for another game to add to your Xbox One library and one that is made to utilize Kinect, be sure to pick this game up. You won’t regret it and you’ll have a whole lot of fun.