Assassin’s Creed Rogue follows the story of Shay Patrick Cormac. You’ll experience Shay’s life both as an assassin and as a Templar as he is constantly trying to do what he feels is right for both himself as well as the world as a whole. This means joining the Templar order and helping them to succeed in their plans. To avoid spoilers I won’t go into much more detail as far as the story is concerned but it is nice to see characters from both Assassin’s Creed III and Assassin’s Creed IV in the game. Assassin’s Creed Rogue does a nice job of tying up a bunch of loose ends from the ACIII and ACIV and even has a small part that ties into AC Unity. There is no multiplayer of any kind in AC: Rogue so you can simply focus on the campaign and, if you are a completionist, hunting down all of the collectibles. The story for AC: Rogue seemed to be a bit shorter than previous entries in the franchise but it will still take you a little while to go through it. In AC: Rogue the Templars are essentially the “good guys” and the assassins are the “bad guys” which was a really interesting perspective to experience given that all of the other games have been from the Assassin’s point of view.

Assassin’s Creed Rogue is set during the Seven Years War across three major areas around North America. Within those areas there are a tremendous amount of locations to visit such as Albany, Halifax, Anticosti and much more. AC: Rogue is a sequel to ACIV: Black Flag so if you went through that game you know what to expect in terms of how the game looks and how the general world is laid out. There is still a lot of naval action whether you are sailing to your next mission or engaging in some combat to acquire supplies so you can upgrade your ship. Of course there is a fast travel option available to you once you visit a location so if you need to get somewhere quickly then you are able to do so. Naval combat still works really well and works essentially the same as ACIV. I was happy to see that as it allowed me to jump right in and basically pick up where I left off. One new experience I had during combat was when an enemy ship would ram into my ship and then try to board and take over my ship. I thought this was fantastic as I’m always trying to board other ships but never had to defend my own from a takeover. Some of the old tricks from Black Flag are still present too such as a ship’s health being tied to the crew on board. What this essentially means is that if I want to capture a Man O’ War really easily, I can simply leave my ship and try to get on that Man O’ War. Once I have taken care of the entire crew on that ship jump off and swim back to my own ship and then fire one shot towards the Man O’ War. Because the ship no longer has a crew and the health of a ship is tied to the crew that Man O’ War gets destroyed with one shot and you are allowed to board and capture the ship. These ships can be hard to deal with if your own isn’t upgraded properly so this is a great technique to not only be victorious in your naval battle but also to add Man O’ War ships to the naval combat mini game.

Speaking of the naval combat mini-game it has returned from ACIV: Black Flag. If you played it in that game then you essentially know what to expect. There are a few minor changes here as far as presentation and the missions you choose to do but the same basic principle is the same. For those you might not be familiar with this mini game, you have a fleet of ships (that you acquire through naval battles) that you send out around the world to do missions for you. One mission might be delivering supplies to allies halfway around the world while another mission might be sending spies to a country to make sure everything is as it should be. You don’t partake in these missions though. Instead you simply send your ship to do it and then are given a timer. Once the timer reaches zero then the mission is complete and you get your rewards. There is some danger to the missions though so you will want to engage other ships in battle within this mini-game to give your ships a clear path to their destination. If your ship gets destroyed in these battles (or during the missions) then you lose that ship and have to go get more. There are different types of ships and different classes so you want to pay attention to what you have and what you need. Personally speaking I tried to fill my fleet with Man O’ War ships but you might want to do something else.

Assassin’s Creed Rogue isn’t without its problems though, albeit fairly minor ones. There were a few instances going through the game where it appeared the framerate would take a hit for a few moments. It was never a big deal and only seemed to happen on occasion when I was free running through a town but it was noticeable when it did occur. I would say the game ran perfectly for me though 98% of the time so it is by no means a deal breaker, just a minor annoyance. There is also some graphical clipping that takes place from time to time that seems to be prevalent in all open world games. The AI still really isn’t the brightest at times either. There were some instances where it would be really smart and it would surprise me but then other times when I’m fighting a group of guards and they all just stand there until I make a move. This didn’t happen all the time obviously but it was interesting how it seemed like they were almost scared to fight me at times. The controls are still a little clunky which might put some people off but I have gone through every Assassin’s Creed game so I have become good at adapting to it. Another annoyance for me was the lack of a companion app. I enjoyed using the companion app for Assassin’s Creed IV and managing my fleet through that even when I wasn’t playing the game itself. It gave me something to do in quick 5 or 10 minute bursts when I was on my iPad and was an easy and effective way to make money in the game. Sadly there is no app for Assassin’s Creed Rogue. Finally I would have liked a deeper story. I really enjoyed the story that was told in Assassin’s Creed Rogue but I would have enjoyed it if it went a little deeper into how everything transpired and various things of that nature.

As far as the story that is there though I really enjoyed it. It has to be one of the most interesting stories in the franchise due to the formula being changed up a bit and the ambiguity in the story. The story is not black and white and there is nothing definitive. What I mean is that you can see Shay’s motivations and why he chose to go down the path that he did but it doesn’t necessarily have anything to do with a creed or a brotherhood. You can see the motivations behind the actions for both the Templars and the Assassin’s and how they kind of want the same thing in the end but have different visions on how to achieve their respective goals. You can see Shay struggle with his decisions at times and that he is his own man. He doesn’t blindly take orders from anyone and is always questioning things. The development team did a tremendous job of making him a bit of a sympathetic characters at times as there are instances where, as a Templar, you have to go against some of the people you once called friends and/or brothers. I also really enjoyed the continuity with the other games in the franchise. There was one instance while sailing towards a mission where there was a brief discussion that centered around Connor from Assassin’s Creed III. There was some discussion about some of the events in Black Flag as well. During the modern day segments you could also learn about other important figures such as Al Mualim from the original Assassin’s Creed game and more. There were also easter eggs peppered throughout that offered up potential ideas for settings in future Assassin’s Creed games such as Moscow, Russia or Kyoto, Japan. Everything came together nicely and I was very impressed how they are able to tie everything together like they have. There is a great blend of old and new here such as bringing back the ability to restore buildings like you could in the Ezio trilogy to the new concept of people stalking you and you having to be on guard if you enter an area and all of a sudden hear a bunch of whispers from nearby stalkers.

Graphically speaking Assassin’s Creed Rogue is a very pretty game. Keep in mind though that it is on Xbox 360 and PS3. There is some slight pop in here and there but overall it is a nice package. It doesn’t look as good as Unity which is obviously on more powerful hardware but on the 360 and PS3 Rogue looks really good. The audio is also done really well from the voice acting to the environmental sounds to your crew singing shanties as you sail across the sea. 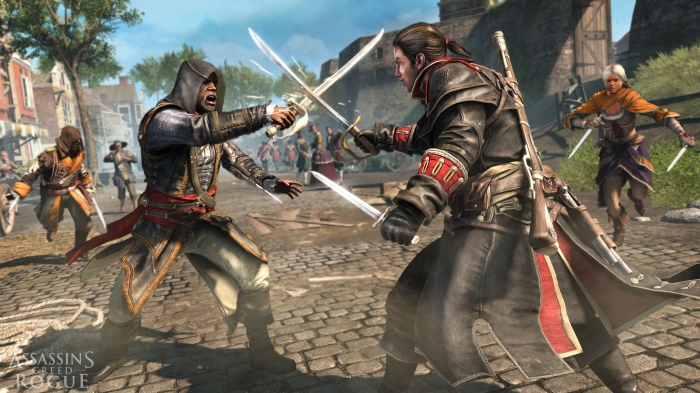 Assassin’s Creed Rogue is a well made game. I have a few problems with it as I outlined earlier but my overall experience with the game was very positive. I love the different perspective of being able to play as a Templar and how there is some ambiguity in the story. I really liked how this was a sequel to ACIV: Black Flag and tied up some loose ends from the previous two entries in the franchise. If this turns out to be the last Assassin’s Creed game on the Xbox 360 and PS3 then it is a great swan song as the franchise transitions to new hardware that will allow the development team to do even more with this great franchise. Be sure not to skip over this game just because it is on last generation hardware. If you are a fan of the franchise then you really must play Assassin’s Creed Rogue.