Assassin’s Creed 4: Black Flag follows the adventures of Edward Kenway, a privateer that eventually turns into a pirate assassin. With that kind of premise, how could you go wrong? Fortunately Ubisoft didn’t, delivering to us a truly amazing game that is not only the most immersive Assassin’s Creed yet, but also the most beautiful and the most “open world” title in the series to date. Making a game like this is no easy feat and on this occasion you can compound the fact that this game needed to look nice and play great on the last generation of consoles with Xbox 360 and PS3 and the now current generation with Xbox One, PS4 and Wii U. For the purposes of this review I went through and played the PS4 version and it is a sight to behold.

Assassin’s Creed 4 starts out with a bang as you are immediately thrust into an action packed sequence where you basically just need to survive. After doing so you find yourself on an island with an assassin that just tried to kill you. This island is immediately available to you as an open world, begging you to explore it. Treasure chests, animus fragments and various other collectibles are strewn about the environment waiting for you to find them. There are, of course, the synchronization viewpoints as well which is always something that I do first whenever I start a new Assassin’s Creed game. 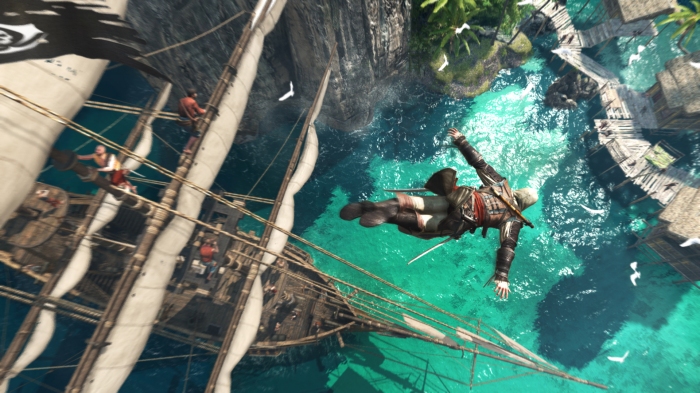 The setting of this game is the Caribbean during the golden age of piracy. You pretty much have the entire Caribbean to explore pretty early in the game as it doesn’t take long for you to get to the point where you have your own ship and crew. As you progress there are a number of upgrades that will become available to you for both the ship and for yourself. You can outfit your ship with better weapons, a stronger hull that will be tested in battle, bigger crew quarters so you can hire a large crew and much more. With Edward you have your weapons as well as a crafting mini game. By hunting (or purchasing hunting supplies) you can acquire different items so that you can build an upgrade that will help you. For example, if you have two great white shark bones then you are able to craft that into a big health upgrade or if you have two crocodile leathers you can craft that into a holster that will allow Edward to carry one additional pistol.

The world of Assassin’s Creed 4: Black Flag is absolutely massive and it is the most seamless experience yet. In Assassin’s Creed 3 if you wanted some naval action it had to be within the context of a mission. With AC4, you can seamlessly be running around a city and then immediately jump into your ship and be sailing out to sea in a matter of moments. You have true freedom here and it is going to take a very long time for you to see and do everything. You can engage in naval battles whenever you want that you will get you supplies that will turn a profit, get you crew members or maybe even a new ship. When you are engaged in battle on the open sea you are given a choice about whether you want to completely sink a ship or capture it and turn it into one of your own. AC4 has a really interesting mini game called Kenway’s Fleet and the way you add ships to your fleet is by engaging them in battle in the main game and then capturing ships once they have become incapacitated. To capture a ship once it has become incapacitated you need to board it and kill a set number of that crew. You can do this in any number of ways getting behind a swivel gun and firing at them to grabbing a rope and swinging onto their ship and disposing of them in hand to hand combat. Once you have successfully done that you can send the ship to your fleet where you will send it on missions. This works the same way previous iterations of Assassin’s Creed has done it where you used to send out Assassin’s to different areas to solve a problem.

Kenway’s Fleet expands on that concept though with the aforementioned naval battles to get ships into your fleet and then your choices once they are there. As you send ships out on missions and they return successfully more routes open up to you. As more routes open up they become more lucrative but also more dangerous. Within Kenway’s Fleet you can engage in ship battles that will help clear the route for when you send them out on the next mission which raises their chance of success as well as bring in some more money and items for yourself. It should be noted though that you need to pay attention to what ships you add to your fleet. Ideally you want to add the brigs, frigates and man o war type ships instead of the gunboats and schooners. The bigger ships mean they can carry more cargo for trade and can also defend themselves better which means they can do more dangerous missions. These missions take place in real time as well so if it says it will take eight hours to do the mission then it will really take eight hours. If you have a lot of friends that play AC4 though they can help you out by either speeding that time up or healing your ship. Friends can help you complete your missions faster so an eight hour mission might only take five hours, for example. The beauty of Kenway’s Fleet is that you can do this anywhere. You can do this within AC4 itself or through the AC4 companion app while you are at work or on the road. Sync the app up to your Uplay account and then to your console while you get home and all of the money you earned when you were gone will be transferred to you in-game so you can send it how you see fit.

The gameplay of Assassin’s Creed 4 is pretty much the same as it has always been only it does seem to be a bit smoother here. You’ll want to go to taverns to get some information from time to time as well as to the harbormaster to get some upgrades. Once you get your hideout you can also upgrade the surrounding area around there as well. The hiding places are a bit more varied so you have more than a pile of hay to jump into if you are trying to escape an area. There is an underwater world to explore as well with ship wrecks, sunken treasure and much more. Beware of sharks though as they will attack. AC4 looks pretty stunning underwater and you’ll probably want to spend time just exploring and seeing what you can find. While on your ship you have your captain’s quarters where you go to switch outfits, upgrade the Jackdaw (your ship) and access Kenway’s Fleet. There are collectibles all around the world whether you are on land or at sea. There is loot you can get that is just floating on the water by sailing by it and the same for rescuing stranded survivors. I had a lot of fun taking out forts which you would disable by firing upon them from your ship and then docking and killing the leaders of the fort so you could take over so it would be a safe haven for you and your pirate friends. The social aspect of AC4 was done really well with social treasure chests found as well as social convoys. These are things your friends have found in your game but once they find them they also appear in your game as well. 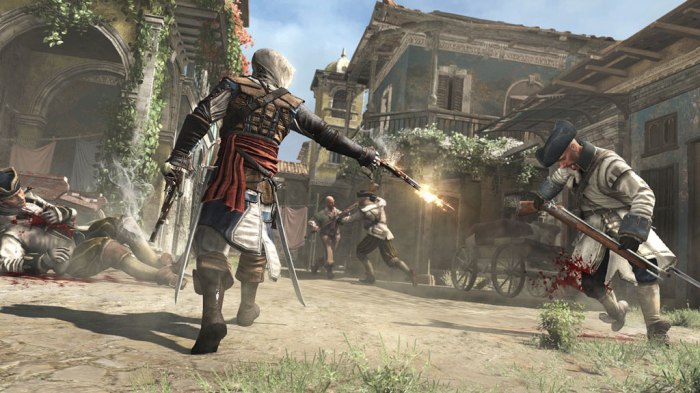 In addition to the massive single player campaign is the multiplayer. This is another mode where you could spend a very long time trying to accomplish everything. For those who aren’t familiar with Assassin’s Creed multiplayer there is a great tutorial that you can go through that will show you the ropes so you can get up to speed quickly. There are a variety of modes from Manhunt, Artifact Assault, Domination, Wanted, Deathmatch and Assassinate. Each mode offers a different experience and helps to provide variety to the multiplayer. There are even different session types such as adversarial, wolfpack and the game lab where you can create your own experience. There are different ability sets that you can mess with, crafting abilities being able to edit your characters visuals and moves and more. This is something that you could get lost in for a very long time and during my play time with it I really enjoyed the game of cat and mouse that would result between me and another player. The Wolfpack mode is also very interesting as it allows you to play cooperative game modes with a bit of a story.

With this being the PS4 version I’m sure you are wondering how the game looks and it is stunning. The water looks realistic and reacts the way you think it should. The environment responds to your actions and the dynamic weather system makes it so you never quite know what to expect and it could affect the game. If you are sailing through a storm, for example, you want to be careful not to get caught up in a water tornado or your whole ship could be torn apart. If you are hiding in a bush waiting to assassinate someone the bushes will react realistically as you move through them, moving as they should as if you were doing it in real life. The draw distance in the game is impressive and the audio is top notch whether it is the water crashing against the side of the Jackdaw, your crew singing sea shanties or a cut scene with a bunch of dialogue. Ubisoft really hit it out of the park here and this game is something everyone should experience.

Assassin’s Creed 4 is an amazing experience whether you are sailing the open seas in the Caribbean or playing online with friends in the multiplayer. There are collectibles strewn about the environment whether they are on land, underwater or on the open sea. You have true freedom to basically do whatever you want to experience the life of a pirate assassin. For people like myself who like to find and do everything then you are going to be spending a tremendous amount of time with this game. For those who simply want to experience the story and not do much else you will have fun too but I urge you to simply wander aimlessly and see what you can find in the world. Assassin’s Creed 4 is the best game yet in this popular series and I can’t wait to see what Ubisoft has in store for us next.