Following his impressive win this past weekend at the Arnold Palmer Invitational, Tiger returns to the virtual green with Tiger Woods PGA Tour 13. This year’s version has a mixture of old features with new ideas. There is the standard exhibition play that houses a number of different modes along with a career mode, the new “Tiger Legacy” challenge and much more. This is also the first year where the team over at EA Sports has introduced Kinect functionality to the franchise. In many ways I think this is a positive step forward for the franchise even if there are a few stumbles along the way.

The gameplay in Tiger Woods PGA Tour 13 has undergone a bit of a change with the new swing mechanics that have been introduced. There is a new “swing plane meter” that gives you more control than ever before. You will want to be careful when swinging your golf club though because if you move your club underneath or over the top of the plane you might cause the ball to hook or slice through the air. Your backswing will help determine how much force is behind the ball as it soars through the air or how smoothly it rolls down the green if you are trying to sink that putt. You can even control the tempo of your shot by swinging the shot stick fast for more power or slowly if you want your shot to have some extra touch.

In addition to the swing mechanics you also have to set up your shot. This is where the caddie can be of great help as he will give you advice on what to do. The game will automatically pick which club for you to use, however, the caddie might suggest something different and it is easy to change with the push of the trigger (or by your voice if you are using Kinect). You’ll also have to decide on whether you want to aim for where the game is telling you or whether you want to try and adjust to get a better angle at the hole. Your stance is important here as well. Your stance will help to determine how well your shot gets off, such as sliding the ball to the front of your stance for a higher launch trajectory. There is also the ball striking meter which gives you control on where the sweet spot is on your club when it hits the ball. This definitely helped me out a jam as whenever I would get into a sand trap as I would simply move the red cursor to the bottom of the ball so that I would hit it higher than normal and, hopefully, get myself out of that trap.

In addition to the controls that I outlined above is the new Kinect functionality for this year’s title. Utilizing Kinect you can feel like Tiger Woods as you go through the same motions that he would on the course as you try to sink your shot. At least that is what the development team was hoping to accomplish. The Kinect controls were pretty good, however, they aren’t great. To take a shot you face the television, clasp your hands together and then make a swinging motion as if you were really swinging a golf club. In my opinion this is where people who golf in real life will have an advantage in the beginning since they have more of a natural golf swing then someone who just plays the games and has never set foot on an actual course. So, with that in mind, Kinect didn’t always properly register my golf swing. After some thought I think that is a mixture of this being EA’s first attempt at utilizing Kinect in this fashion and my horrible golf swing. It didn’t always pick up everything that I wanted it to, however, when it did, it seemed to work well. I did notice a difference from when I first began using Kinect up until the point where I was writing this review. My golf swing did get better over time so there is a chance to improve on that if you care about that sort of thing. There was even one point where I almost got a hole in one utilizing the Kinect controls. Some of the other things that you can do with Kinect are actually quite clever. To zoom in on the hole for a better look all you have to do is put your left hand up as if you were trying to block the sun in real life so you can get a better view. Obviously you can’t zoom in like that in real life but I thought it was a neat idea. There are also voice commands for you to utilize such as verbally asking your caddie for advice or quickly switching out your club. Overall I felt the Kinect implementation in this title was pretty good, however, it still needs a little bit of work.

Next up is the skills challenge. This allows you to earn in game rewards by completing individual in-game objectives. There are different types of objectives to complete with some of them being time based and others that will always be there for you to complete. The way that you complete a challenge is by achieving a total number of each of the following stats: holes played, birdies, eagles, greens in regulation and fairways in regulation. Once your goal has been reached for each of those individual challenges you will receive a Skills challenge award. An interesting feature that they put in is that you don’t necessarily have to complete these challenges with this year’s version of Tiger Woods. EA Sports has introduced “Cross Play” which allows you to play other EA Sports golf titles to help complete your objective. In my opinion this is a pretty cool idea even though I don’t know how many people will truly utilize it. It seems like when a new iteration of a sports title hits the market that a lot of people migrate over to that game and don’t play much of the older titles. Perhaps that is just me though.

Country Clubs have also been added to the mix and is a great way to play with your friends over Xbox Live. With this new mode you will be able to create your own country club (or accept a friend’s invite to their country club) and team up to increase your stats quicker as well as your reputation. You will earn status points after each round of golf you play to level up your country club. The higher your country club’s level the more coins you earn so it is important that you play regularly if you want to amass a small fortune of coins so you can buy pins and rounds of downloadable courses. There is a weekly status leaderboard that will also pit you against other members of the country club. You will be giving a ranking based on your status and your weekly performance. Each week the club champion is awarded a substantial coin bonus. Club champions will also be granted access to represent their country club in special club championship events that EA Sports will hold from time to time.

If you don’t feel like playing online and just want a solo experience then you can always go through the “Tiger Legacy” challenge. By playing this mode you will experience some of Tiger’s greatest golfing moments ranging from when he is a toddler all the way up to becoming a golfing legend in the future. You start this mode off as a two year old Tiger Woods that appears on the Mike Douglas show and go up to where Tiger Woods made his first hole in one at the age of five. You then have the early years where Tiger participates in tournaments and championships and is really trying to hone his craft. The “early years” culminate with you at the 1986 Majors where Jack Nicklaus set the record for most career major wins with 18. You’ll play the last three holes of that course trying to get a score of two under par. There are different time periods throughout Tiger’s life that you will experience and it all culminates with you trying to beat Jack’s major championship record. I actually had a lot of fun playing this mode. I’m not a huge golfing fan by any stretch of the imagination, however, something about this mode just clicked with me. I found it interesting going through the evolution of Tiger Woods and reliving some of his biggest moments in golfing. 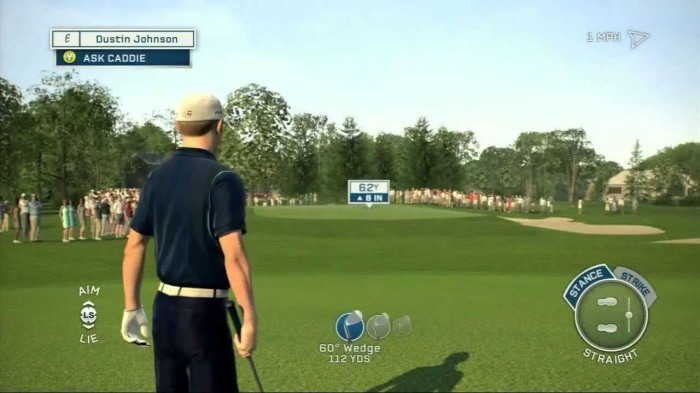 I mentioned above about how you can buy rounds of downloadable courses utilizing the in game coins you will earn in Tiger Woods PGA Tour 13. This is one area of the game where I feel it really stumbles. When you start up the game you will see that there are a lot of courses in the game that are locked. You can use coins that you have earned to purchase rounds on these locked courses. Please keep in mind that once your rounds are over the course is locked again and you won’t have access to it. The only way to really open up the course and earn “unlimited rounds” is to use the course mastery feature to unlock it or to spend Microsoft points to buy the course. If you are a big golfing fan then the chances are you will probably play this game enough to where you will unlock all of the necessary objectives to play on these locked courses. If you are just a casual fan though this is a bit of a slap in the face as you can see all of these wonderful courses that are in the game but the only way you will realistically get the chance to play them is by paying EA more money. By looking at the Spyglass Hill Golf Club I saw that I could buy one round with 6,000 in-game coins or I could buy the course for 400 ($5) Microsoft points. Of course I also had the option of purchasing a five course pack for 1,600 Microsoft points ($20) or an eleven course pack for 3,200 Microsoft points ($40). I had fun with the courses that are available to you when you start up the game but this is a pretty blatant attempt at trying to “nickel and dime” your consumers.

Overall I have had a lot of fun with Tiger Woods PGA Tour 13. Despite my complaint about the way some of the courses are handled this is a great golfing title. This is the first golfing game that I actually got into in quite a while and I can see myself playing it for a long time. There are a lot of things to do here that should keep golfing enthusiasts busy for a while. The new online features are a nice step and the Kinect integration is a nice step in the right direction. If you normally don’t play golfing titles I would recommend that you rent this game to see what you think. You might be surprised and want to go pick up this game for yourself. For those who join Tiger on the virtual green every year, you should enjoy the new additions that the team over at EA Sports has implemented. It is a good amount of fun and probably the closest experience to golfing you can get without actually stepping on a golf course.