Years ago when I first learned about the Mass Effect trilogy I thought it was an incredibly ambitious project for Bioware to undertake. I wasn’t sure if they could pull it off or not but I was definitely intrigued and as I went through the first two games I was excited to see how it would all culminate in Mass Effect 3. Fortunately Bioware has delivered on their promise and has delivered a compelling final chapter for Shepard’s story. Throughout the series you have had to decide who lives and who dies. There have been instances where you decide through your actions whether two different races can co-exist or not. There are even moments where you decide the ultimate fate of certain species. Mass Effect 3 is no different as you will finally get the chance to close off story arcs from the first two titles such as the Genophage and much more. You also get the chance to meet new friends and help out familiar faces. The fate of the galaxy is in your hands and your decisions will determine how the story ends and the resulting consequences.

Mass Effect 3 begins with Shepard on Earth having been stripped of his command following the events of Mass Effect 2. It isn’t long before the Reapers attack and you have to go rally the galaxy to stand united against the common threat of the Reapers. I don’t want to go too much more into the story as I don’t want to spoil it for anyone and chances are that you know what the main goal is for the Mass Effect series if you are interested in this review. The mission structure in Mass Effect 3 is similar to the previous titles in the series with a couple of differences. In Mass Effect 3 it is easy to tell which missions move the story along as they are marked with the “Priority” tag. You still have plenty of side quests to do although keeping track of your progress within these side quests is a lot more difficult this time around. When you went through a side quest in Mass Effect 2 your journal would keep you up to date on your progress. If there were five things that you needed to do to complete the quest the game would check off your objectives as you completed them so that you knew where you were within that quest. Mass Effect 3 doesn’t do this which can make some quests harder to do if you aren’t paying attention. Also, if you have to stop playing in the middle of the mission for some reason, when you come back to play it might be hard for you to remember what you still need to do. This could potentially be a big problem and I’m shocked that the Mass Effect 3 journal didn’t have the same functionality as its predecessor. 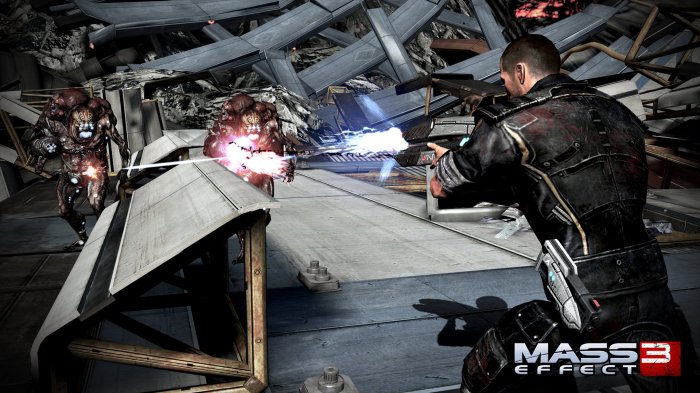 Another potential problem for the game is that it seems to have trouble bringing over the face you used in Mass Effect 1 and/or 2. I generally just use the presets for this type of thing but if you are someone who worked meticulously on your face in Mass Effect 1 or 2 then it doesn’t appear you will be able to import it to Mass Effect 3, at least not until a patch comes out for it. The other problem that I experienced from time to time was the map system. Initially I really liked how they did it in Mass Effect 3, however, there is one problem that becomes more apparent as you play the game. The map system is not specific enough. What I mean by this is that it could tell you that a person is at the Lower Bar in Purgatory when in reality they might be standing away from the bar and might even be on one of the dance floors. This is certainly not something game breaking or anything like that, it is just a minor annoyance. One aspect of the map system that I did really enjoy was how it alerted you to the fact that there was someone you needed to speak with. Say, for example, I found something on a planet that a scientist on the Citadel needed. As soon as I arrived back on the Citadel a scientist would be put on the map indicating that I should speak with him. Once I spoke with him and completed the mission then he disappeared off of the map. My final complaint about this game is specific to the Xbox 360 version. Mass Effect 3 is on two discs and while I normally don’t have an issue with that the development team over at Bioware did something strange here. For some reason in the beginning of the game I was having to continually swap out discs depending on what mission I was on. After a little while it evened out and I stayed on disc two for quite a while but the way they structured the game on the discs was very strange. The ending itself was even on disc one which didn’t make a whole lot of sense.

With all of those complaints out of the way I can focus on everything that Bioware did right with the game. Despite the above complaints the game really is pretty incredible and I thoroughly enjoyed my time with it. One of the first “wow” moments for me was when I was in the Citadel and I met someone that I had saved back in Mass Effect 1. Because I had chosen to save them back then they were able to help me out of a jam now. I really got a kick out of being able to see the consequences for the actions I took in the first two titles. I was able to see and help out some old friends and I even rekindled a romance with someone that wouldn’t have been possible if I simply started Mass Effect 3 from scratch. I was able to see the result of the choice I made in Mass Effect 2 to save a civilization and rediscover a race I had not seen since Mass Effect 1. Whereas the story in Mass Effect 2 was more about building up a team, gaining their loyalty and then taking out the Collectors, the story in Mass Effect 3 was much larger in scale. As Shepard I had to navigate galaxy politics and help out different civilizations before they would commit to joining my forces. I had to try and unify the galaxy which no one thought could be done due to differences in the past. The team over at Bioware has created a great story where everything seemed to flow really well and I was happy to see some of the resolutions that I have been waiting five years to see.

The combat in the game is pretty identical to Mass Effect 2. You can still take cover and you still have the weapon/power wheel to scroll through. If you are someone who prefers story over combat there is a “narrative” mode where enemies become really easy to kill allowing you to focus more on the story. This is essentially a “super easy” mode. If you are playing the Xbox 360 version you also have another option with Kinect voice recognition. I was stunned at how well the Kinect integration worked. Bioware really nailed it which is really impressive. There is a bit of a learning curve as you need to get used to verbally ordering your teammates around but once you do the game tends to open up more. Once you are able to get in a rhythm the combat becomes faster and more intuitive. Instead of holding down a bumper, scrolling over to the weapon you want and then selecting it you can simply say “shotgun” and Shepard will quickly take out his shotgun. If I needed to switch my ammo type all I needed to say was “Incendiary Ammo” and Shepard quickly switched over. I was able to quickly tell a character to utilize Warp on one enemy and have my ally use Singularity on the other enemy approaching. Navigating conversations with Kinect also worked out really well as I could simply lay the controller down and proceed with the conversation as if I was talking with a live person.

Mass Effect 3, like many other rpgs, is a game that encourages you to explore at every turn. I received a good number of side quests simply by walking around the Citadel or somewhere else and overhearing a conversation between two people. There was one instance where I heard a doctor talking on the phone about needing to find a cure for one of his patients and that ended up becoming one of the side quests. Some of these side quests are nothing more than simply finding an item and bring it back. There isn’t a specific quest to pick it up. For example…I might be on the Krogan home world doing something and I end up running across an item that I need for another quest. It works out pretty well and forces you to explore your surroundings if you are the type of person that likes to do everything in a game. Other side quests are much more involved and might have to trying to evacuate people defend a key location against your enemy. The more important side quests have achievements tied to them so you will definitely want to go through those if you care about your gamerscore.

Overall Mass Effect 3 is a pretty incredible game and a nice way to finish Shepard’s story. The final consequences the galaxy has to face will depend on your choices. Mass Effect 3 is full of endings and I am not just talking about what you see in the final few minutes. You will end the story arc for many characters as you go through the game and your decisions will decide their fate. The graphical fidelity in Mass Effect 3 is pretty amazing and there were a couple of times where I just stood and stared at the scenery for a few moments. This is definitely a game that everyone should own. You will want to go through Mass Effect 1 and 2 before playing this title though so you will be able to grasp the situation and understand the consequences of your decisions. If you simply start playing Mass Effect 3 without the other two then you might be a little lost with some story elements and it will take away from the experience. Bioware is to be commended for realizing that ambitious idea that they introduced many years ago and I look forward to seeing what takes place next in the Mass Effect universe.