Prophet has returned and he is determined to wipe out Cell and the Ceph. Crysis 3 begins with you trying to get into the New York biodome so that you can eradicate the Ceph once and for all. Along the way you see various visions of a future that you are trying to avoid at all costs. Most of the people that you run into seem to think you have become more machine than man and don’t believe in your visions. It isn’t until certain events transpire that people start believing what you have been saying all along and it becomes your job to not only save the planet but humanity itself as well.

Crysis 3 takes place inside the New York biodome and it really is a sight to behold. This is one of the prettiest games that I have seen on a console and there were times I couldn’t help but stop for a moment and marvel at the environment. Going through the tall grass trying to hunt down an enemy as the grass swayed in the wind was a lot of fun as I really enjoyed using the environment to my advantage. Crysis 3 is a title that shows off Cry Engine 3 exceptionally well and it bodes well for future Crytek titles, at least as far as graphics are concerned. The environments were nicely varied with some of them being wide open spaces that would allow you to proceed as you see fit and others being a bit more claustrophobic. Utilizing the environment was key for me as I progressed through the story as I would use my different Nanosuit abilities to try and eliminate my enemies before they even knew I was there. The audio for the game was also done really well with the way the weapons sounded, the sounds of you (or your enemy) traversing the surrounding area and generally setting the appropriate mood for the setting that you were in. I thought the voice acting was done really well and it helped drive home the relationship between the characters. 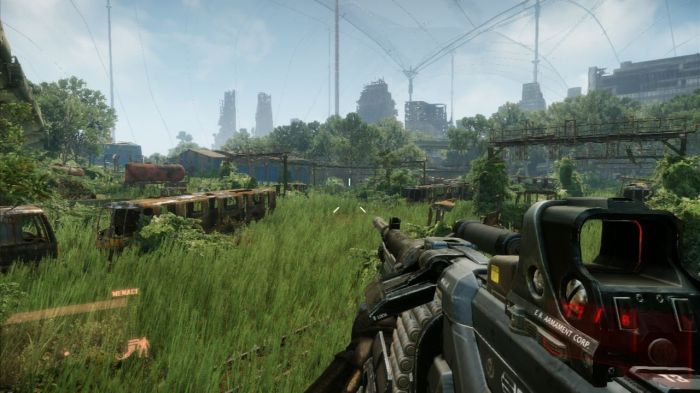 The gameplay for Crysis 3 is smooth and flows really well, for the most part. You have a number of weapons at your disposal and you can almost always find a weapon cache if you don’t like your current setup. One of my favorite weapons to use was definitely the bow and arrow and it helped me take down some formidable foes in the game. There are different types of arrows that you can use with some you can use on your standard enemy and others that will stick to an enemy and explode a few seconds later. These types of arrows help with enemies that might have a lot of armor on or other hard to take down creatures. Another advantage to using the bow is that it is pretty silent. I went through the campaign of Crysis 3 and primarily treated it as a stealth game. I’ve never killed so few enemies in a first person shooter before but that became a secondary objective to me. When I did have to take someone out I loved to utilize the cloaking technology the Nanosuit had and then sneak up behind someone and quietly eliminate them before anyone found out. One of my favorite tactics was using my visor and scanning the environment in front of me. I would locate a turret and hack it remotely so that it became an ally instead of an enemy and would eliminate Cell soldiers for me. I found it funny to watch Cell soldiers scramble once a turret turned on them but to the AI’s credit they did try to get to the turret and shut it down. They didn’t just stand there and let themselves get shot and overall I found the AI to be pretty smart about things like that. The only part I didn’t enjoy a whole lot was the driving sections. These are few and far between but when it does happen the driving controls feel far too clunky for my liking.

I enjoyed the freedom that Crytek gives you in Crysis 3. I’m not necessarily just talking about the open environments but also the way you are allowed to approach them. You can try and make it into a stealth game like I did or if you want you can go in guns blazing like a normal first person shooter. The experience you have really is up to you and I really enjoy it when a game lets you dictate that. As you progress in the story you will be given optional objectives to complete. These objectives aren’t required for you to progress in the game but completing them will be beneficial to you. There was one instance where a mortar team was pinned down by the enemy. I went over to where they were and saved them before they got wiped out. To thank me they offered me support and for a little while whatever enemy I targeted was hit with a bunch of mortar fire from the team I had just saved. It is little examples such as that which will help to define what kind of experience you have. You can absolutely blast through the game and only do whatever is required of you and have a great time doing it. Or you can try and help out with these secondary objectives whenever they pop up and reap the rewards for that action.

Of course the campaign is only part of the package and some people will probably go straight toward the multiplayer suite. You have your standard multiplayer modes with deathmatch, team deathmatch, capture the flag and more. There is also a “Medley” playlist which is a mixture of all game modes in one playlist and a “Developer’s Choice” playlist where Crytek determines the stipulations including the weapon that is used, what the rules are, the map you are on and the different features. There are over ten different game types to choose from so everyone should be able to find one they enjoy. During my time with the multiplayer everything ran smoothly and I didn’t experience any lag whatsoever. Crysis multiplayer can be really fast paced with people jumping over your head, utilizing their cloaking ability, calling in airships and more and it all seemed to run seamlessly.

For those who like extras that studios put in from time to time there is also quite a bit to see here. There is a “Nanosuit Showroom” that will allow you to get a close look at the suit and some of the different things it can do. There is your service record which gives you your stats such as how many stealth kills you have, how many hacks you have attempted and things of that nature. You have story information that you can look at and you can view videos as you unlock them by going through the campaign, in addition to listening to the music score. These are some pretty nice bonuses for anyone who is interested in that type of thing. 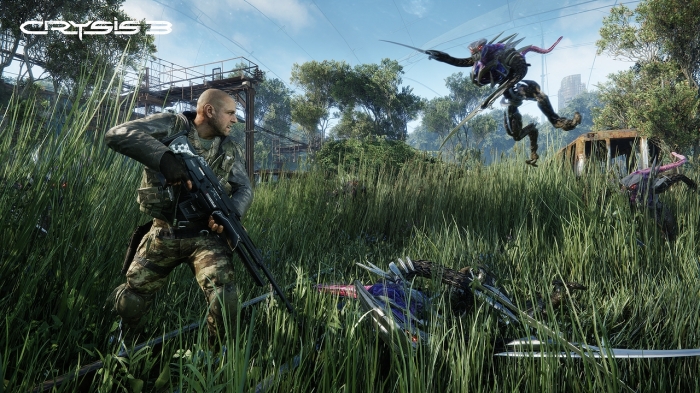 Overall I found Crysis 3 to be an enjoyable title. The visuals are stunning and the game runs seamlessly. The gameplay and story really isn’t anything we haven’t seen before but I don’t necessarily need things to be radically different for me to enjoy them. As long as it is a solid title then I will more than likely enjoy playing it and that is exactly how I would describe Crysis 3. A solid title that might not break any new ground but what it does do it does exceptionally well. If you are a fan of first-person shooters then I would definitely give this game a try. Oh and be sure to stick around and see a pretty cool scene after the credits stop rolling.