THQ has returned to the Octagon with its third iteration of their main UFC franchise, UFC Undisputed 3. Along with this new iteration comes some new changes and gameplay improvements over the previous titles. MMA fans will be delighted to see the inclusion of Pride and everything that brings along with it. New weight classes have been added with the Bantamweight and Featherweight divisions. A new control system has been implemented for more casual fans and a new submission mechanic is also introduced. The amount of content in this game can be pretty staggering and if you are a fan of MMA then you owe it to yourself to play this game.

UFC Undisputed 3 has a lot to offer MMA fans with one of the big parts of the game being the career mode. This is where you get to experience the life of an up and coming fighter. After creating your fighter and going through the tutorials, you’ll be introduced into the WFA (World Fighting Alliance). This is where you need to show off your skills and get people to notice you. If your fights impress the right people then you will eventually earn an invitation to join the UFC and/or Pride. With that being said, just because you receive an invitation doesn’t mean you should accept it. If you are invited to the UFC but decide to stay in the WFA to hone your skills then you will enter the UFC at a higher ranking later on provided that you keep dominating. This is a double edged sword though because if you start losing in the WFA then you are going to have to start proving yourself all over again. Before you can actually fight though you have to select your opponent. You are generally given a few different options and you should really pay attention to your potential opponent’s stats so that you can achieve your goals. I was trying to earn a lot of cred (the in game currency) so I would end up picking the fights that would give me the most cred. That would generally mean fighting the highest ranked guy out of the list you were given at that time. Once you select your fight you will get the chance to either watch some upcoming events or quickly simulate them. If you don’t want to be bothered with this decision in the future simply select “always simulate” and you will be good to go. After that you will go back to the main menu within the career system and have some decisions to make. Do you want to train certain aspects of your game such as your cardio and strength? Or do you want to work with one of the real world camps in the game to learn and/or upgrade a move? Some of the real world camps in this game include Greg Jackson’s, American Top Team, Wolfslair MMA Academy and more. If you don’t want to do anything at all then you can immediately jump in to the fight. In previous iterations of the UFC franchise there tended to be a lot of stat management. One of the many improvements that came with the extra development time is that the career mode is much more streamlined. You get back to fighting a lot quicker than you did in other titles which keeps you more engaged in the game. You can also change weight classes this year. If you are dominating (or being dominated) in a particular weight class then you can either move up a weight class or down one level until your skills are up to par. If you don’t want to create your own fighter than you can go through the “roster career” which allows you to go through career mode with an established UFC and/or Pride fighter.

Another mode in this year’s version is the Title Mode. This is where you pick a fighter and work your way up a ladder to the championship. You started out ranked #16 and you have to work your way up to the #1 position and become the champion. It’s a great way to test out your skills with this game as you are going to go up against the best in whatever weight class you are fighting in. Once you become the champion you unlock Title Defense Mode, which should be pretty self explanatory. There is also tournament mode where you can play a regular UFC tournament or a Pride Grand Prix Tournament. Ultimate Fights Mode is where you get to pick from a famous UFC and/or Pride fight and relive history. You’ll have a progressive based task system to work with and will be given tasks to complete in each fight. You’ll be able to fight with both fighters in this year’s iteration and once you complete 100% of the tasks you will be treated to a video about that fight. It is a pretty fun mode but I do have one complaint with it. When you are first starting out you only have access to five fights. There are a lot more available to you there, however, you can only play them when you purchase them as downloadable content. I think it is a bit of a slap in the face to look at a list of approximately 29 fights, however, you only have access to five of them without purchasing DLC. If they were going to do that I would have almost preferred that we didn’t see those locked fights at all unless we bought the downloadable content they are associated with. That way we don’t have it staring at us in the face. Finally, there is event mode where you can create your dream UFC and/or Pride event. You set up the whole event and then either watch as everything unfolds or you can participate in each fight if you want. Big MMA fans should enjoy this mode a lot as you can create a lot of dream matchups that we haven’t had the chance to see in the UFC or Pride.

The inclusion of Pride in to this game is huge for MMA fans. For those who aren’t too familiar with Pride their rule set is a bit different than the UFC. It is almost like having two different games in one package. In Pride you can stomp your opponent in the face and, in the game, you even get an achievement for kicking your opponent in the face. Whereas UFC has five minute rounds, in Pride the first round is ten minutes long with rounds two and three going five minutes. Fights in the UFC take place within the octagon whereas fights in Pride take place in a ring. In Pride elbow strikes to the head and face are illegal. In the UFC elbow strikes to the head and face are allowed. The development team has really upped the ante as far as presentation goes and UFC Undisputed 3 brings with it fighter entrances. If you are at a Pride event you will see everything you would expect from the big video screens, pyrotechnics and more. For UFC fights you will see what you see on television with fighters walking to the Octagon with their entourage in tow. In Pride mode you have Bas Rutten and Stephen Quadros as commentators while the UFC fights will feature Mike Goldberg and Joe Rogan. The game also features the roster from both organizations which means there is an incredibly deep roster here from you to choose from.

Of course, you don’t have to use any of the fighters on the roster. You can create your own fighter as I have mentioned before and you are given a whole slew of options to choose from. Customization is key here and you can make your fighter look however you want. You can choose the way your fighter looks, the way he enters the Octagon, the way he celebrates a victory and much more. You’ll get a set number of points that you can use to build the categories you want to whether you want a fighter that excels offensively or defensively. You can also change such things as his hair style, facial hair, tattoos and more. As you progress in the game you will unlock access to sponsorships. Once you enter into a contract with a sponsor you can then put their logo on your clothing or your banner. Some of the sponsors in the game include MMA Elite, MusclePharm, Xyience and much more. By advertising for these sponsors you will earn additional cred which will allow you to upgrade your fighter, purchase new sponsorship items and more.

There is also the highlight reel feature. The last 50 rounds from any fight in any mode are saved to your clip editor. What this allows you to do is create highlight reels utilizing footage from multiple fights. Depending on how much time you want to spend with it you can make some really amazing videos of some of your best highlights using items like transitions, music and film effects to make it really stand out. Once you are happy with your creation you can upload it for the community to see and rate. It should be really interesting to see some of the videos that people come up with over the lifespan of this title. 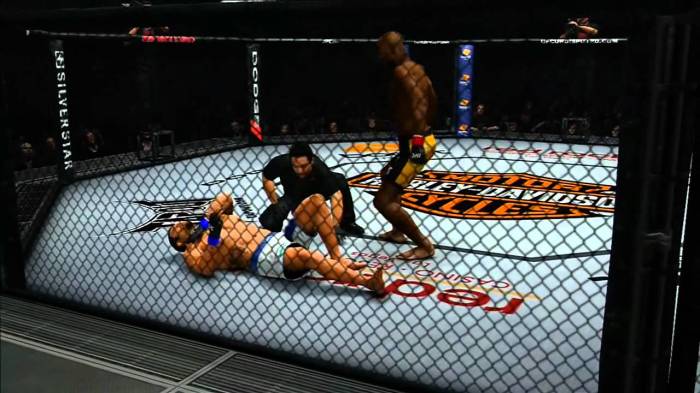 If you are the type of person who only likes to play his games online then UFC Undisputed 3 also has a lot in store for you here. There are exhibition matches where you can fight against other members of the community, or you can create/join a Fight camp on Xbox Live. The Camp Menu offers a variety of options based on player rankings including the option to view camp milestones, invite new camp members, monitoring the online status of your camp and more. You also get to participate in sparring sessions with members of the camp, compete in ranked matches outside of the camp and more. You’ll get a chance to represent your fight camp online to see who has the best camp. It is a great feature and I look forward to seeing how everyone is going to use it.

UFC Undisputed 3 offers a tremendous amount of content. Mixed Martial Arts is not really a sport that needs an annual title and the development team took full advantage of the extra time they had with this game. The finished product is extremely polished and it looks amazing. There is a lot of depth in this game that should keep fans busy for quite a while. The inclusion of Pride into the game worked really well as did the addition of the Bantamweight and Featherweight divisions. I could continue on about the game but you should just go play it. If you are an MMA fan then you definitely should pick up this title. It is the best UFC title to date and one you shouldn’t miss out on.