The day a lot of gamers have been waiting for has finally arrived with the newest iteration of the SSX franchise hitting store shelves. SSX brings back the fast paced snowboarding action that the fans have been clamoring for and the development team has done an amazing job. This game is faster than ever as you hurl down the mountain trying to outrun an avalanche, soar majestically through the air utilizing your wingsuit or try to chain together combos in an attempt to replace your friend on the leaderboard. Each mountain presents multiple paths for you to take and numerous ways to fly high or wipeout. It is all about finding the best possible path and looking good while doing it. This is the new SSX.

As you go through SSX you will notice that there are three main pillars of gameplay with “Race It,” “Trick It” and “Survive It.” “Race It” should be fairly self-explanatory as you race others to the bottom of the mountain in an attempt to win (or at least get top three to advance). “Trick It” is essentially what SSX has always been about as you try to perform over the top tricks and mid-air maneuvers in an effort to rack up points and dominate the leaderboards. Then there is “Survive It” which is making its debut. This mode will pit you against the mountains themselves. Think of the “Survive It” mode as kind of like the boss battles in the game. The run down the mountain is pretty hard and can get really intense as you might have to jump over an avalanche, use a wingsuit to quickly get out of a bad situation and more. There were times when I would cross the finish line with only a sliver of health left barely surviving the experience. There were other times where I couldn’t quite make it and had to start over. In the World Tour mode these are also known as a “Deadly Descent” track and there are nine of them that you will have to conquer. 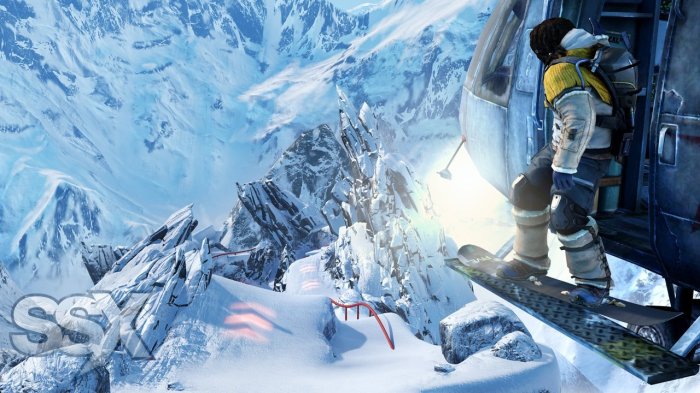 As you begin the game you will be prompted to choose one of the two control schemes. There is the new “carving” that you can do with the left analog as well as controlling grabs and jumping with either the right analog or buttons and you can switch between them at any time. There is also the option to play with the classic SSX controls for longtime fans of the series. One of the new features for this SSX title is the fact that the mountains have an open world environment. Each mountainous region features a few different tracks and within those tracks you are free to make your own way down the mountain. As you speed down the mountain you will zip by branching paths, canyons and ramps that you can jump off of to find even more areas. There will be trees and rails to grind on that will take you to unexpected places. The game takes you all over the world from the Rockies, Siberia, New Zealand, Antarctica, Africa and more. Each area will have its own characteristics such as Patagonia which features chasms that can only be crossed utilizing your wing suit. Then there is Alaska where you will find an unused oil pipeline where you can work on your grinding skills. Everywhere you go there is something new to see and it will take you multiple playthroughs on any given track if you want to see everything and really nail the track.

The World Tour mode is basically the campaign for this title. In the beginning you learn about someone putting together an SSX team, however, before anything can really get started, someone betrays the team and then leaves them high and dry. It then becomes a race between the SSX team and the other team to see who can conquer the world’s Deadly Descents first. It really isn’t much in the way of a story but this is a title that really doesn’t require a big story. There are nine regions in the world tour with a different rider for each region. Team SSX features both new and familiar faces for those who have played previous entries in this franchise.

With all of that said there is also, of course, the online mode. SSX doesn’t feature multiplayer in the traditional sense and there will most likely be some people that will take issue with that. SSX has the “RiderNet” which was inspired by AutoLog from the Need for Speed series. RiderNet will help players to navigate the world and will help you find your friends. I found this extremely useful and it is a great awy to cut through the clutter, so to speak. Much like AutoLog, RiderNet will also keep you up to date with all of your personal and friend’s accomplishments so that you know when someone broke your record. SSX offers two main ways to play online. You first have the “Explore” mode which is where a huge chunk of the game is. There are over 150 drops for you to choose from which should keep fans busy for a very long time. The Explore feature will allow you to chase your friends records through asynchronous friend vs. friend competition. There are uploaded ghosts which show you the different lines and strategies that your friends used which could help to improve your overall game. Perhaps they had an idea or found a new path that you weren’t aware of that can really take your skills to the next level. What is also interesting here is that your own ghost will earn credits every time a friend competes against them. The better your records are the more credits you will earn as your friends keep trying to break your record. It should also be noted that, even though this is primarily an online mode, you can play this mode offline and spend your time earning medals against the AI.

You then have the Global Events. Global Events are real time competitions against other people online in the world. You can compete in multiple events against thousands of players at any given time. You are also able to create an event at any drop point in SSX and then invite your friends. During my play time with it I found a great spot in Patagonia where some friends and I had a lot of fun trying to outdo each other on the mountain. Custom Global Events can host up to 500 people riding down the mountain at the same time so chances are there won’t be a shortage of people on the mountain with you. As you are racing down the mountain you will come across something called a Geotag. Geotags are essentially collectibles that you will find spread out across the mountains by other players. By collecting Geotags you will earn some credits and you can purchase and place Geotags yourself. When you are placing Geotags down you will want to try and place them at an out of the way location. The reason being is that the longer your Geotag stays on the mountain, the more money you make. Global Events also tend to be timed. There was one event that I joined where that particular event was going to be available for an hour. Once that hour was up no one had found my Geotag so I was award extra credits. Being high up on the leaderboard is also crucial for the same reason. The first time I raced down a mountain in a global event I earned the bronze medal and was near the top of the leaderboard. When the time had expired on that particular event no one had beat my bronze medal score so I got more credits because of it. You can use these credits to purchase items such as gear, mods and more. The same equipment might not work on all tracks so it is important to keep up on everything that you need to buy or equip if you already own it. If you don’t happen to be playing the game when these events end then you will also be awarded the credits when you return. 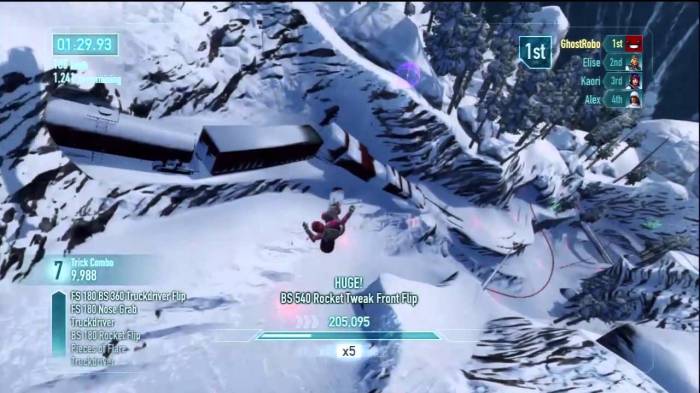 While you are hurling down the mountain at breakneck speed you need something to listen to, right? Fortunately the soundtrack in SSX is pretty awesome. The soundtrack includes songs such as I Gotta Rock by DJ Shadow, Magic by J Boogie’s Dubtronic Science, You Future by The Prototypes and much more. If you don’t like any of the bands in the game then you can also create your own custom playlists for both menu music and for in-game. Finally, EA utilizes their “harmony engine” to remix the licensed tracks and your custom music based on what you are doing and how you are playing the game. This resulted in some unexpected surprises while I was playing the game and I am sure it was one of the reasons why I really enjoyed the soundtrack.

SSX has returned bigger and better than ever. You can tell the development team took great care to bring their vision to life and they have given us the best SSX game to date. They have brought back what made SSX so great in the past while seamlessly blending in new concepts to great effect. I can’t really think of any significant problems I had with this game. I can see some people being annoyed at the lack of “traditional” multiplayer but it didn’t bother me personally. If you were a fan of the older titles than this is a game that needs to be added to your library. If you are new to the franchise the tutorials will get you into the action in no time and then you’ll be in for a real treat. The online can also be addictive as your friend’s score continues to taunt you. Do you have what it takes to own the planet?