Warhammer 40,000: Kill Team has arrived in the nick of time to whet our collective appetites before Warhammer 40,000: Space Marine hits stores in September. There is even a tie in where, if you complete a mission in Kill Team, you will unlock a power sword to use in Space Marine. Kill Team is a twin stick shooter where you are making your way through a ship destroying as many orcs as possible. There are four different classes to pick from with the Sternguard Veteran, Librarian, Vanguard Veteran and the Techmarine. After trying these different classes the Librarian was definitely the best class for me. The Librarian has a great mixture of ranged combat with a bolt pistol as well as great melee skills with a power sword. My favorite melee weapon in the game was unquestionably the “Force Sword Epic” which sliced through enemies with the greatest of ease. You can also choose up to two different perks to utilize such as increased health, increased damage to enemies and things of that nature.

As you progress through the campaign you will come across a variety of different enemies with some being more annoying than others. The ones that seemed to give me the most trouble were the enemies with flame throwers on their back. There are a variety of power ups in the game that saved me on more than one occasion. There are powerups which increase your rate of fire, give you more health, make you invincible and one that creates an energy field around you so that anything the orcs shoot at you will simply bounce off it. Obviously these power ups only last for a short period of time, however, there are times when they can be the difference between life and death in the game. There was one boss fight in particular where my life meter was extremely low and the shield allowed me to stay alive long enough to deal the final blow to that boss. 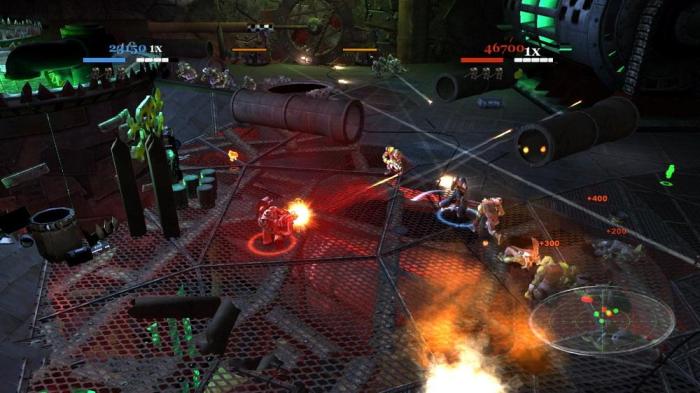 As you move from chapter to chapter you are essentially trying to cripple the orcs ship so that it can no longer threaten the Space Marines. There will be various tasks that you have to complete with some being better than others. There is one part where you have to destroy a place where a bunch of vehicles are kept so you have to run around and plant explosives. This was an objective I particularly enjoyed and it looked pretty cool to detonate all of the explosive charges as I was running out of that area. When you begin playing this game it is important that you find out which Space Marine works best for you. As I mentioned above, the Librarian suited my play style the most and is the one I had the most success with. Having the correct Space Marine with you is crucial as the enemies will swarm around you and you will be shot at from every direction so you need to be able to act quickly and be familiar with your characters abilities and weaknesses.

In addition to the campaign itself, Kill Team also features a Survival mode. This should be pretty self explanatory as you play for as long as you can survive. For those who enjoy stats you have access to both global statistics as well as personal ones. There are also leaderboards so that you can see where you rank against the rest of Xbox Live as well as your friends. Then there is the Codex which is what gives you the backstory for everything you see in the game. This is where you can get to know the Space Marines a little better as well as the enemies that you have encountered during the campaign. This is a great idea for those who want to get a little deeper into the Warhammer lore.

I don’t have a whole lot of complaints with this title, however, there is one big one. The co-op in this game is local only. This would be a fantastic title to play with your friends over Xbox Live and could really extend the replayability of this title. Yet, for some reason, the development team didn’t think it was important enough to include. With as much fun as I had going through the game by myself, the fun factor would have increased exponentially with a friend. These days, with this type of game, it is an inexcusable mistake not allowing me to go through the campaign with a friend over Xbox Live. There were also times when the camera was pretty awful. I dislike it when games don’t allow me to control the camera, however, with some games it is done so well that it really isn’t an issue. For the most part that is true with this title. There are a few instances though where I was given really bad camera angles and I just had to guess and hope that I was headed in the right direction.

Overall, Warhammer 40,000: Kill Team is a fun title. If you are a fan of the Warhammer universe you should have fun controlling the Space Marines and if you aren’t familiar with the franchise you should still have fun killing a lot of enemies and blowing stuff up. I generally enjoy twin stick shooters and this title was no exception. The game is a little light on story which some fans might take issue with, however, it is a great way to get into the lore a little bit before Space Marine arrives in September. If you are a fan of this genre I definitely recommend that you give this title a try. If you don’t have much experience with this type of game then be sure to download the free demo off of Xbox Live. You might be pleasantly surprised and discover a favorite new genre and/or game.