Dirt 3 has finally arrived. The latest iteration in Codemaster’s popular “Dirt” franchise is now available and, once again, the development team has done an outstanding job with this title. There is so much content in this game that it should keep racing fans busy for quite a long time. Once you are done with the offline races you can take your car to the online track and show off your skills. Dirt 3 also features Youtube functionality so if you have a great race you can upload part of it to the web to show off to your friends. You also have a garage where you can customize your cars with different liveries. Additionally, there is also a news section where you can keep tab on what your friends are doing as well as some overall statistics taken from the Dirt 3 community itself.

One of the things that Codemasters ended up doing with Dirt 3 was giving their fans more content. Dirt 2 featured 41 routes whereas Dirt 3 features over one hundred. Dirt 3 has cars that represent five decades of rallying from classics like the Mini Cooper and Audi Quattro to the Ford Fiesta. One of the modes that I had a lot of fun with was the new “Gymkhana” mode. This is where I could practice a lot of my maneuvers, complete challenges, string together moves, try to break records by racking up a high score and more. There are also new environments and more waiting for racing fans.

The heart of the offline gameplay is definitely the “Dirt Tour”. The “Dirt Tour” runs for four seasons and within each season are four triangles. Each triangle represents a different race which has approximately five events. That brings around twenty events per season with four seasons available which should keep racing fans busy for quite a while. In addition to those four seasons you will also gain access to the “Battersea Compound” where different challenges will await you. The seasons tend to have a pretty nice variety to them in terms of the type of racing you are doing and the environments you are racing through. Some tracks have multiple uses as well so you might do a Rally race in Norway but then do a Head 2 Head race later and use a different part of the same track. As you progress throughout the seasons you will hear your team encouraging you and giving you tips on what to do. There will even be times when you get pointers from Rally driver and Gymkhana expert Ken Block. Dirt 3 features a lot of different disciplines for racing fans. There is Rally, Rallycross, Trailblazer, Gymkhana, Landrush and Head 2 Head. Going through the “Dirt Tour” will also increase your standing and your reputation. As you win races and events you will gain new sponsorship and new vehicles will open up to you as well. You also have a single player mode outside of the “Dirt Tour” where you can participate in a single race or do a time trial to hone your skills.

If you want to take your skills to the multiplayer arena there is plenty for you to do there as well. There is multiplayer over Xbox Live as well as Split Screen and System Link multiplayer as well. The Xbox 360 version of Dirt 3 also utilizes the Xbox Live party system to try and make it easier to play with a group of your friends. Once you jump online you will have the standard “ranked” and “player” matches. In the “Pro Tour” will you have to race hard and earn fame in ranked matches. If you just want to have some fun you can go into the jam session and make your own rules in player matches. The number of players that can participate will be dependent on whether you are playing ranked or not as well as a few different factors. There is also an option to invite your friends or join others that already have a session going. If you happen to join a session in the middle of the race you can spectate the remainder of the race as you wait for it to end so you can jump into the fray. While spectating you can jump from car to car and it is definitely a lot more fun than just looking at a menu on a screen waiting for the race to end. As you race online you will continue to build up your online fan rating which will get you a achievement once you attain the title of “Superstar”. I can also happily state that during my time with Dirt 3 online it ran amazing well. There was no lag at all and everything ran really smooth with no hiccups.

As I briefly mentioned above Dirt 3 also comes with Youtube functionality. After you get done with a race you can then watch the replay and decide whether you want to upload the race to Youtube. There are a few limitations though. You can only upload thirty seconds of your race. This was a bit disappointing to me as I would have loved to have been able to upload one of my races in its entirety. I do realize though that those file sizes would be huge and it would probably take too long to upload to Youtube for a lot of people. The videos will also only upload in standard definition. Even though I was playing the game in 720p my uploaded Youtube video would only go to 480p. Once again I am sure this is due to file size but it is a bit disappointing all the same. Once the video is uploaded to Youtube you can even edit the video some more if you so desire. For me the videos uploaded fairly quickly and took about an average of five minutes. Your time will vary depending on the quality of your internet connection.

One thing that is especially great about Dirt 3 is how accessible the game is to everyone. The development team over at Codemasters did an exceptional job of balancing this game for everyone. If you are really hardcore about your simulation racing then you can turn all of the assists off and show your skills out on the race track. If, however, you are a more casual fan than you can turn on all of the assists and the game will take care of the majority of the technical aspects for you. It obviously won’t do everything for you but it will pretty much make it so the only thing you have to worry about is pressing the gas button and trying not to wreck your vehicle. If you are coming up to a hard turn the car will brake automatically to get down to an acceptable speed and then immediately speed back up when you are in the clear. This should definitely help in the longevity of this title as both the hardcore and casual fans can find something to really enjoy about this game. 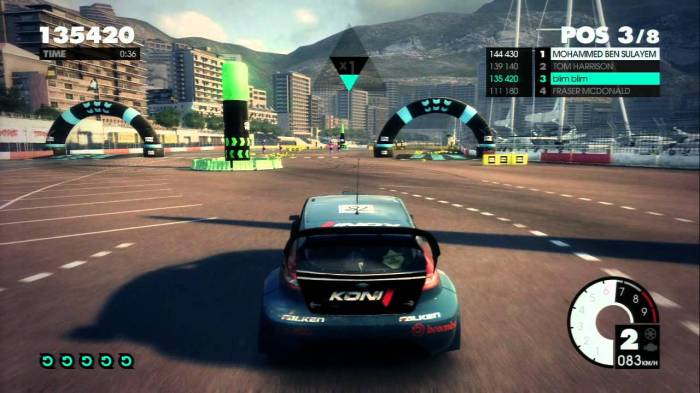 Dirt 3 is an exceptional racing game. The development team has really hit a home run with this one and should be commended. It is very hard to achieve just the right balance to make everyone happy and yet that is exactly what has been done here. The Youtube functionality is a great touch and I’m sure a bunch of videos will pop up with people challenging their friends to beat their record or their highest score. The amount of content in this game is fantastic and I’m sure there will be even more in the future with downloadable content. If you are a racing fan then you need to give Dirt 3 a chance. Even if you are just a casual fan be sure not to overlook this game. You might be pleasantly surprised with what you find as this is a game for the hardcore and casual fan alike.