EA Sports first entry into the world of virtual mixed martial arts has arrived and arrived with a bang. Before playing this game there were a lot of questions with how this title would stack up against THQ’s UFC titles. EA Sports has a particularly tough challenge ahead of them because THQ has locked up the rights to the UFC for many years to come and, as MMA fans know, UFC is the predominant brand in MMA, similar to how WWE is the dominant brand in professional wrestling. With all of that said, because EA can’t focus on UFC, they have decided to focus on a bunch of other smaller federations including Strikeforce. Even though EA doesn’t have the UFC license they can still focus on some fighters that have made their mark in the UFC. As a matter of fact, Randy Couture is one of the cover athletes for this game. The big question is though, is EA Sports MMA a good game?

I had a lot of fun playing EA Sports MMA. Your level of enjoyment will be determined on the type of game you are looking to play. In the UFC titles there is a ton of strategy involved and the controls are fairly complex to try and mimic the sport. In EA Sports MMA the controls are simplified so you don’t have a really steep learning curve. An example of this would be if you are in a full mount on your opponent then all you have to do is push “X” to initiate a submission (assuming you have “learned” that ability). In the UFC title it was more like a fighting game where you had to do a motion with the analog sticks to accomplish the same thing. To get a better position in this title you simply have to push the “A” button and, as long as your opponent doesn’t block it, you will be successful. This level of simplicity is certainly not a bad thing. It is just kind of the opposite direction that the UFC titles have gone and your enjoyment of this title will be dependent on whether you want this simpler control scheme or whether you want a more strategic, complex control scheme. 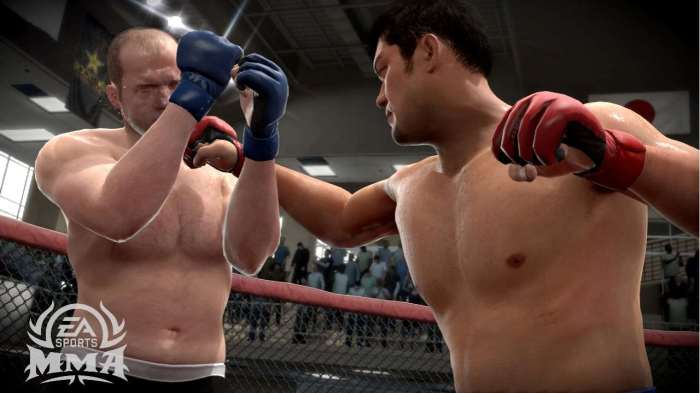 When you boot up the game you will find the standard option set. You have your exhibition mode, tutorial, career mode, online and everything else. Just like with previous EA Sports titles you will need to enter a code to access online play. You get a code with each new copy of the game so this isn’t a big deal, just something to be aware of. The theme of this review is simplicity and after going through the career in EA Sports MMA for a while it is very much a simplified version of the UFC’s career mode. In between each fight you will have eight weeks to train your fighter. You can work on various aspects of your fighting such as your stand up game, your clinch skills, defending against submissions and various other things. You can also travel to other gyms for more specialized training. You simply pick the area you want to work on and away you go. In the UFC titles you had to worry about things like your fighters health and stamina. Those don’t factor into EA Sports MMA so it is nothing you have to worry about here. After your eight weeks are over you will have your fight and then, afterwards, you will have another eight weeks to travel. You will start out at the bottom in smaller federations, however, as your skills improve and you start winning, you will get invited to the bigger federations.

I have gone over the many similarities between this title and the UFC titles, however, there are some innovative things that EA Sports has done as well. The EA Sports Live Broadcast is essentially a live, weekly fight card for real world prizes and instant notoriety. Gamers who are interested can make their own hype videos to post online and if they are really good they will get noticed. If you stand out EA Sports promoters will set up a fight card complete with live, professional announcers, videos and make it all available for spectators. There are also 45 levels of belts to earn online and another 45 in the master division so the online portion of this game has the potential to be incredibly deep. Additionally, utilizing the Fight Card mode online, you can set up your own online event, provide commentary and create an MMA league of your own. In addition to all of that you can also study the tape. Your most recent ranked fights are automatically stored on EA servers and can be reviewed by you or others so you can see what went wrong or develop key strategies against an upcoming opponent. Graphically, the fighter models look really good and the developers did a good job on the environments. They really captured the feel of fighting in a local community college all the way up to the big time. The commentators in the game are Mauro Ranallo and Frank Shamrock which adds some authenticity to the proceedings.

Overall this game is a lot of fun. I didn’t really come across any issues except that the loading times, on occasion, seemed to be a little long. EA Sports has done a good job here taking what worked in previous MMA titles and incorporating their own ideas, such as the EA Sports Live Broadcast. That has a huge amount of potential if it is properly supported so, hopefully, EA Sports keeps that going. I would love to see something like that in future Madden titles where I can go online and be a spectator as I watch two friends battle it out. It could definitely help add some of the real life drama that you see in the NFL. If you are an MMA fan be sure to give this title a shot. If you aren’t an MMA fan then you should still give this game a chance because it can be a good fighting game too. Overall, I liked what EA Sports has given to us with this title and, hopefully, we’ll see even more in the second installment.