Darkstar One Broken Alliance is something that is rarely seen these days. It is a space combat sim where you venture to different systems and take on pirates, gangs and more. The main storyline has you trying to figure out what happened to your father and chasing down the people that are responsible for what happened to him. This game also features a bunch of side quests that you can do at any time and you will have to do quite a few of them to earn credits, the in game currency. When you acquire enough credits then you will be able to purchase the appropriate parts for your space ship. This will allow you to go to the distant universes required to find out about your father’s fate.

Throughout your journey you will come across new friends and find out that some people who you thought were friends are really the exact opposite. You will also come across some rather poor voice acting and the cinematics will look dated. There is a reason for that of course as this title was originally released on the PC four years ago. Not much was changed during the port except for them upping the graphics to 1080p. Seeing as how this was originally a PC title the controls were created with a PC in mind and it shows. The control mapping on this game is a bit awkward at times and not very well thought out. You pilot your spaceship from the first person perspective and there will be times when you are fumbling with the controls a little bit. As you are flying through space there will be times that you need to check your star map or maybe check on the details of your current mission. You can do this by holding down the right bumper and selecting the appropriate option, however, the game doesn’t pause when you do that. Essentially you might fly right by your target when you are consulting your log book or space map and have to turn around to try and hit your target again. It can be pretty annoying when that happens and you will quickly learn to try and think ahead a little bit or just have your ship pointed in a random direction so you don’t miss anything while getting updates. 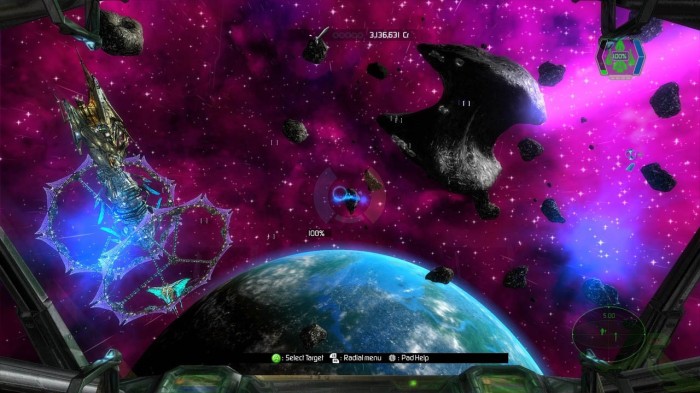 As with any title as you progress through the story the enemies will get tougher and you get the choice of what weapons your spacecraft will have. You can spend those hard earned credits at trade stations to upgrade your arsenal as well as the ship itself. You can purchase a landing computer that will assist you in landing at these stations, you can buy a jammer to try and fool the space police when they scan your cargo, you can buy a different generator that will allow you to travel farther, quicker and much more. Trade stations are also the places to buy items such as food, precious metals, electronics and more for you to trade throughout the universe. You can even buy video games to trade, however, not every galaxy will accept them. The station is also where you will pick up your side missions. They are located at your terminal and you will get a quick summary of what is expected of you as well as what your reward will be once you accomplish the mission. Obviously some missions are harder than others, however, the bigger the risk, the bigger the reward.

One of the cool things about this title is that you do face some consequences for your actions. Your reputation matters in this game and if it is bad it could get in the way of what you want to do. Before landing at a station you have to contact them and request permission to land. If you are a criminal then chances are they will deny your request and you will have to fly to another system to see if they are more lenient. This is an open ended title and you will get to somewhat choose your path. Obviously the story will point you in one direction, however, the way you get there is completely up to you. You choose the type of missions that you want to do and you live with the consequences. The combat itself is pretty fun and there is a bit of strategy to it if you want to utilize it. There is a bit of aim assist to help people out and you can also select a target to try and help you be more accurate. As you go through a few of the side quests though you will quickly realize how repetitive this game can be. I would fight a bunch of different pirate groups (and kill them) and remarkably it seemed like the same person would appear in the com screen to taunt me with the exact same voice despite the fact that I had already killed him twenty times. That got to be annoying as I would hear the same lines over and over again, ad nauseum.

Darkstar One Broken Alliance is an interesting title. It is definitely showing its age in some respects as the developers didn’t do a whole lot of improvements when they were porting it to the Xbox360. With that said though there aren’t a whole lot of games like this on the Xbox360. Keeping that in mind it will definitely have its fan base as it will be serving a group of people that has been largely ignored. There are definitely some fun moments to be had and once you adjust to the control scheme and the way things work it could also become a fairly deep game. It’s also not a short game so if you are someone who likes titles that you can sink your teeth into then you will definitely want to give this game a try. Your enjoyment of this title will be based on whether you can look past some of the flaws. If you are able to do so then you should find your time in outer space enjoyable.