The wait is finally over and Modern Warfare 2 has finally released worldwide. Modern Warfare 2 has been one of the most highly anticipated games of 2009 and with good reason. Simply put, this game is awesome. Infinity Ward took the winning formula from Call of Duty 4: Modern Warfare and improved upon it in almost every way. The story picks up five years after the events in Modern Warfare with some old allies and enemies popping up as you progress through the campaign. The length of the campaign is equivalent to the first title which is both good and bad. It would be nice to have a longer campaign, however, I wouldn’t be willing to sacrifice the quality of the story that Infinity Ward has crafted in exchange for artificially extending the play time. The campaign is only a third of the package though and Infinity Ward has made sure that gamers will be kept busy for quite a long time trying to unlock all of the different achievements. The other parts of the package include the multiplayer and the brand new Spec Ops mode.

For years, gamers have been asking for a co op mode in a Call of Duty title. Last year Treyarch put in co op for World At War, however, the implementation was screwed up. Spec Ops is Infinity Ward’s answer to everyone wanting a co op mode. Within the Spec Ops mode you have five different categories: Alpha, Bravo, Charlie, Delta and Echo. In the beginning the only one available to you is Alpha. You unlock the other ones by earning stars in the Spec Ops missions. The way you earn stars is by completing various objectives. There is one mission where you have to complete the training course in under thirty five seconds. If you can do that you will earn three stars. If you complete it in under forty five seconds but over thirty five then you will get two stars and so on. Other missions will necessitate you beating it on Veteran difficulty if you want to get the maximum amount of stars. Fortunately, Infinity Ward has kept up the tradition of not having multiplayer achievements in their titles. That means that it is actually possible to get all 1,000 gamerscore, it’s just not going to be easy. Much like Call of Duty titles of the past, if you want to get 1,000 gamerscore in this title you will have to beat it on Veteran, which is no easy task. There is a reason they have the tagline “You will not survive” for this level of difficulty. That holds true for the campaign mode as well as Spec Ops. Getting every star in this mode will require you to do a lot of it on the hardest difficulty. As I mentioned, this is the new co op mode, however, you don’t have to play it with a friend. There is the option for solo play if you simply want to try and tackle these challenges by yourself. Additionally there is also split screen play if you have a bunch of friends over at your house. Unfortunately the co op is limited to two players online. It would have been nice if they could have upped that to four player online co op. Hopefully that will come in Infinity Ward’s next Call of Duty title. 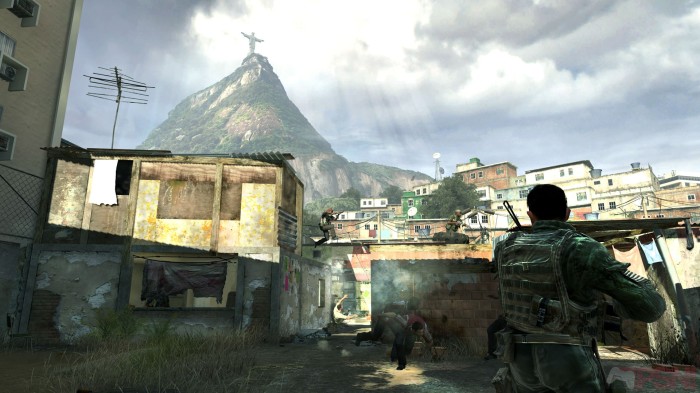 As I mentioned above the story for Modern Warfare 2 picks up five years after the events of Modern Warfare. At the end of Call of Duty 4 you thought you had ended the war, however, as it turns out, it was only the beginning. Someone else has risen to power and is doing everything he can to cause chaos and destruction. As you play through the campaign you will notice the upgrades that have been made since the original Modern Warfare. The environments look better and are a lot more varied, the enemy A.I. is a lot better and overall the game is simply more intense. It is like a blockbuster movie and you are in the leading role. They waste no time and immediately drop you into a huge firefight once you have completed your training. The level design is also better in this title which can make it a lot harder on you, even on the easier difficulties. There are a couple of missions where it seems like enemies are coming at you from every angle and you have to be able to react quickly if you want to survive and get to the next checkpoint. In this campaign you fight all over the world as you have to fight through a favela in Brazil, infiltrate a base during a blizzard in Kazakhstan, defend your home turf in Virginia and much more. Along the way you will be introduced to all of the new weapons that were put in this game. There is a really cool thermal sniper rifle which can help you out during a blizzard or if someone has thrown a smoke grenade. There is also a new predator missile which is a missile you can control remotely to aim at a group of enemies (or vehicles) to take out a whole group at once. You control the missile as it is falling from the sky so you can hit your enemy with pinpoint accuracy. It can really be a whole lot of fun, you just have to make sure you find a safe spot before you do it. You are not invincible when controlling this missile and the opposition will take you out if they get a chance. They even upgraded how it looks when you are getting shot at by enemies. In past Call of Duty titles the screen would turn red as you were taking damage. In this title though there is more of a layer of blood that splatters on the screen making everything a bit more realistic. Your health will still recharge after a few moment but the overall effect is done very well.

The third part of the package is the multiplayer. It is the same multiplayer that you loved from Call of Duty 4, only better. Everything runs smoother and the new additions that have been made make for some very hectic matches. Once again, you are given the option of playing it over Xbox Live, Split Screen or via System Link. The standard set of options returns from the original Modern Warfare such as “Create A Class”, “Barracks” and more. Additionally there are also some new additions that have made their way into this iteration. Once you rank up to level ten in the multiplayer you will have the chance to choose your killstreak rewards. This adds a whole new level of customization to your game where you can decide what you will get if you get going on a kill streak during the match. Infinity Ward has definitely upped the ante as far as your rewards are concerned. In Call of Duty 4 you would get a helicopter if you racked up seven kills in a row without dying and that was the top reward. In Modern Warfare 2 they went above and beyond. While still keeping the helicopter in the game, the rewards you get later on can have a devastating effect on the entire match. Everyone remembers the mission in Call of Duty 4 where you were on the AC-130 and you were raining fire down upon your enemies. Well, if you get a killstreak of 11 in Modern Warfare 2, you will get a chance to do that again, this time to your multiplayer opponents. If you manage to somehow get a twenty five killstreak going then you have access to a nuclear weapon which will obliterate everyone on the map. There is, however, a way to defend against it. If you use an EMP at the same time the nuke is launched then it will render the nuclear weapon inoperable.

If you are one of those people who tend to die a lot in these multiplayer sessions then you can take advantage of the new death streak system that has been put in place. Basically the way this works is it tries to level the playing field so you don’t get taken out as much. If you get taken out four times without getting a kill then you will be given the option to use “Copycat”. What this particular perk does is it allows you to steal your killer’s class while in the killcam. There are other ones such as “Painkiller” which gives you a big health boost when you spawn after you have been taken out three times without a kill. “Martyrdom” also returns from the original Modern Warfare as does “Final Stand” although those last two only get unlocked when you start getting into some of the higher ranks. Another new addition to multiplayer is the care packages. To use these you would put down a special grenade which would signal where a care package will be dropped. These care packages can carry a variety of items and, if you’re lucky, could end up being a short cut to getting a better weapon or a better perk. There was one that I got that had a Predator missile so I could use it on my enemies. The cool thing here is that the care package is not just for the person who called for it. If your enemy calls for a care package you can go over there and steal it. It is every man for himself and the first person there is the first person that will get it. This could potentially change the entire complexion of a game if a team that is getting hammered all of a sudden gets a boost and can start fighting back and gaining more ground.

Overall, Infinity Ward has outdone themselves and made one of the very best first person shooters, ever. The campaign, while short, is epic and a lot more intense then the original Modern Warfare. The enemy A.I. is a lot smarter and will make you rethink your tactics from time to time. The Special Ops mode is an incredible new feature and will keep gamers busy for a very long time. It can be very addictive and people will continue to play it even after they have earned all of the stars. This mode is going to surprise a lot of people who don’t quite know what to expect. The multiplayer is an incredible achievement by Infinity Ward, improving on an already fantastic experience from the original title. It runs smoother, the maps are designed better and it is a lot more intense. There is plenty of material here to keep everyone busy for a very long time. If you are a fan of the Call of Duty series or of shooters in general, this is a title you must own.