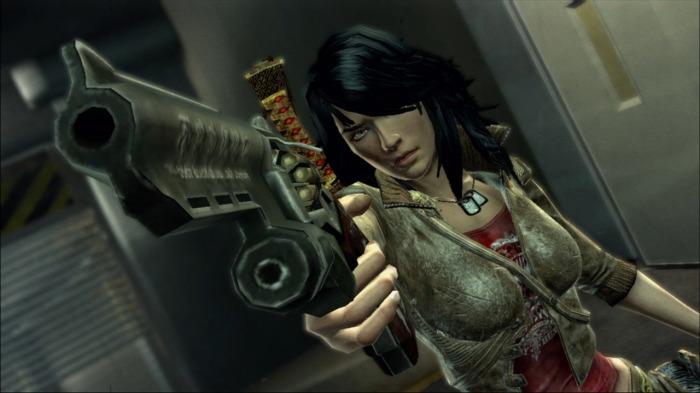 Wet is an interesting shooter. On one hand there are definitely some cool aspects to it, however, on the other hand there are some really frustrating moments as well. It is a very stylized shooter that is all about trying to make you feel like you are in a movie. Anyone who has ever seen a Tarantino movie, or at the very least Kill Bill, will immediately recognize where the development team got their influence. This game is almost like a tribute to Tarantino and some of his films and one has to wonder whether they tried to work out a deal with him and it simply fell through.

Wet has a very grainy, old school movie type of feeling going for it, almost to a fault. While I appreciate the visuals and the distinctive art style, there are some elements that would continually take me out of the experience. The guilty culprit was generally the short little commercials that you would sporadically see throughout your adventure. At first they were cute and I chuckled to myself when I saw it. However as you progress they would pop up at seemingly random times and would completely take me out of the moment and the mindset of trying to accomplish whatever my goal was at that time.

The controls for Wet could have also used some tightening. While it has the basic shooter controls for the most part there was often times where I would do something unintentionally which would result in my character getting killed. One such incident would be when I tried to jump straight up to shoot someone and instead my character automatically jumped forward resulting in my jumping off a cliff, a high balcony or wherever I happened to be standing. Once you are in a slow motion moment you are also completely locked in to the whole animation. It would have been nice if I could have somehow “canceled” the animation so I could disperse with the enemies surrounding me in an easier fashion. The animations weren’t nearly as smooth as they should have been as I would also perform unintended actions such as running up a wall when I was trying to do a wall run.

With all of that being said I am sure the game is sounding pretty bad, however, the game is actually a lot of fun. The fun moments that I have had with the game far outweigh the annoyances that I experienced throughout my adventure. There is a bit of a repetitive nature in some areas, however, it is switched up a bit so it isn’t completely repetitive. There are these arena combat scenarios where you will have to deal with infinitely respawning enemies until you basically “lock” the doors they are coming out of so no more can enter the area. Once you “lock” the doors then you have to take care of the remaining enemies to clear the area. There are times where there will be a really powerful enemy that will take you a while to beat and then once he is weakened you will have to run up and engage in some quick button presses to finish off the kill.

This brings up the many ways to kill your opponents. As you jump, slide and glide down into areas you will automatically enter an acrobatic slow mo moment where they try to make everything cinematic by slowing everything down. During these times Rubi will automatically aim at an enemy, however, you are always dual wielding so you can free aim with the other gun and, if you are good enough, you can take out multiple enemies at once. There is no limit to how much you can use this ability so if you are running low on health you will always want to keep moving as the enemies will obviously have a harder time hitting you if you are moving around. There are times when your health can regenerate, however, that will depend on your multiplier. The higher your multiplier is directly correlates to how fast your health will regenerate. If your guns aren’t doing enough damage or you are engaged in close quarter combat then you also have a sword at your continuous disposal. Simply take your sword out to enjoy slicing and dicing your enemy all over the area. There are multiple bars and ledges for you to climb and swing on so it is fairly easy to get the drop on enemies, especially during these slow motion moments. As you progress you will be able to upgrade Rubi’s abilities as well as her weapons. Your currency in the game is your “style points” and you earn these by taking out enemies and achieving other objectives with a sense of style. Swinging on a bar and taking your enemies out in mid air will net you more style points then simply standing still and shooting someone. At the end of each stage you will be graded on your acrobatic skills, among other things, and you will get the chance to spend your style points in the upgrade shop. There are even achievements tied to purchasing all of her abilities and weapon upgrades.

There is also a mode that you will experience a few different times called “Rage” mode. This is where the Kill Bill influence truly shines as Rubi gets some blood all over her face after killing an enemy running at her. This throws her into a rage and the whole screen turns blood red with instances of black and white throughout. The basic objective of taking out all of the enemies is the same but at least it changes the look and feel up a bit so it doesn’t feel as repetitive. There are also some other types of missions in an effort to change things up as you are hunting your prey. The second chapter in the game has you jumping from vehicle to vehicle on a highway trying to take out your enemies as you are chasing someone that has stolen something that belongs to you. Think of the freeway chase scene in Matrix Reloaded and you will get somewhat of an idea of what to expect here. I had a lot of fun with this mission and it would have been nice to have a little bit more of it. Another mission has you skydiving from a plane that is completely destroyed and you have to avoid all of the wreckage and shoot enemies that are falling besides you at the same time. It can get kind of intense especially on the harder difficulty levels. This mission also has a level of annoyance with it as it doesn’t make a whole lot of sense. One of the ways your character can die in this level is by hitting some of the debris and the way you die is you fall to your death. However, your character is already falling, so it makes absolutely no sense how hitting a box can cause your character to die. It’s almost like the development team didn’t fully think about that part.

Wet is a very violent game and has fun reveling in that fact. It is also a profanity laced title where Rubi doesn’t know the meaning of the word subtle. She’ll gladly tell you to go screw yourself right before she shoots you in the head or stabs you in the heart or crotch. Wet revels in its over the top violence, blood, gore and language. Overall it is a fun title and I was compelled to continue on to see what happens despite my frustrations. Be sure to check out this title as I’m sure this is a title that will probably become a cult classic. I would love to see a sequel with just a bit more polish and all of the other nagging issues addressed. Wet is definitely a competent shooter and hopefully it does well enough where Artificial Mind and Movement will get a chance at another title.