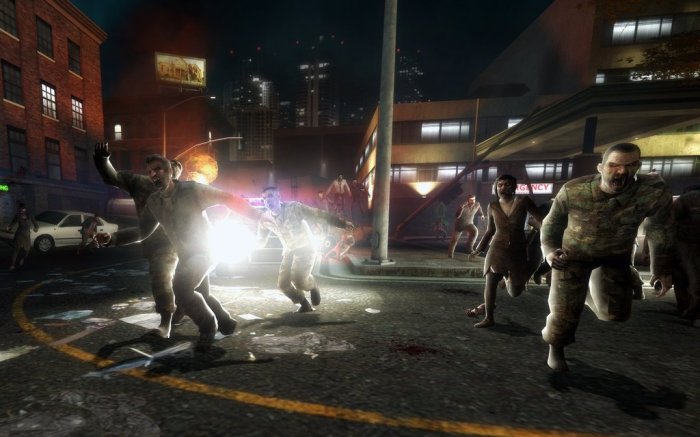 Left 4 Dead is Valve’s latest masterpiece and it is one that stresses teamwork. This is not a title where you can go out on your own and hope to survive. Much like the horde mode in Gears of War 2 you will live and die by your teammates actions. The zombies tend to come quick and if you keep having to replay a section they won’t always come from the same place. You need to be constantly on alert and aware of your surroundings. You also need to keep track of your ammo and the health packs that your team is carrying. If one of your teammates is about to get taken out and you still have your medical pack, then it would probably be a wise move to heal him instead of hanging on to it. Conversely if your health is really low than your teammates will use their medical supplies to get your health back up.

When you first start up the game you will notice that there are three different game modes for you to enjoy. You can play through a co op campaign over Xbox Live with three of your friends and try to make your way through the zombie horde to the extraction point. You can play a versus match where you can play as either the Survivors or as the Infected. Finally, if you just want to play by yourself with the computer you can do that as well. There are four levels of difficulty for you to choose from and four different campaigns to experience. You can choose to play through either the “No Mercy”, “Death Toll”, “Dead Air” or “Blood Harvest” campaigns. Each campaign will take you 1 ½ to 2 hours to complete. If there is a certain section that you want to play you can also jump into a specific chapter within that campaign. Additionally you can also pick which of the four survivors that you want to play. If it doesn’t matter to you then you can let the computer choose for you and be surprised.

Once you are actually playing the game you are going to notice just how vicious the zombies horde can be. There are different types of zombies running around some more dangerous than others. There is one really fat zombie called a Boomer that you will run into quite a bit. As soon as you see him immediately back up and get out of his range. If you don’t then he will throw up on you and that smell will attract the whole horde towards you. You could be in an empty hallway with just that one Boomer, however, if he throws up on you the hallway will be immediately filled with large groups of zombies trying to get towards you. Not only that but you are blinded as well so you won’t necessarily see where they are coming from. There is even an achievement for getting blinded and no one in your team taking any damage during that time. There are also Hunters who will pounce on you when they see you and if you are not quick they will pin you to the ground and your teammates will have to save you. The game will adjust to how you are playing so you won’t necessarily experience the same thing twice. There was a part that took me a few tries to pass and every time I played it the enemies were put in different locations. It’s experiences like this that make this such a great game. The way that it adapts to your play style is really remarkable. The game is always monitoring how you are playing and in doing that it determines where to place weapon locations, ammunition, health packs and things of the nature.

Overall this is a fantastic game to play with friends. If you can get a good group of guys together playing this you will have a blast. There really isn’t much story to speak of but you will have fun shooting zombies nonetheless. Graphically speaking it is a pretty game, however, there are better looking games out there. One of the games slogans is “Fight Together or Die Alone”. It is a very apt description of the gameplay you will experience. Working together is the only way to survive in this game. If someone goes off on their own you probably won’t survive and then you put the overall health of the team in jeopardy. Can you survive the zombie apocalypse?