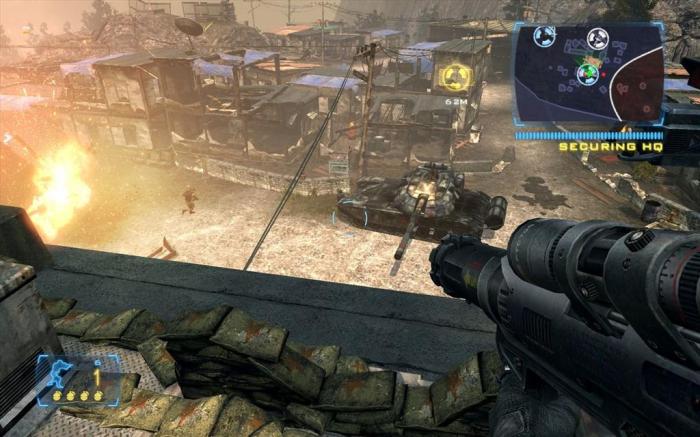 With 2008 off to a roaring start in terms of game releases, THQ has now released Frontlines: Fuel of War. Frontlines is a first person shooter set in the not too distant future with a relevant storyline about oil shortages and the lengths some will go to secure that oil. You are a “stray dog” , part of a military force that is there to stop the evil Red Star empire from changing the world as we know it. As you slowly gain the advantage on the battlefield and push the frontlines deep into enemy territory you will have to save hostages, stop nukes from going off, defend villages and much more. Throughout your journey you will have a reporter constantly at your side documenting what is actually happening and sending news reports back home to the states.

As you progress through the different levels you will have a number of objectives to complete. The game is completely non-linear, so you can choose the order of which you will tackle the objectives. If you can’t get to a certain area then use one your drones for reconnaissance as well as to help turn the tide in your favor. During one part of the first mission you have to fly this drone over a wall and into the control room of an enemy compound that is locked down. Once you get to the control panel itself, you detonate the drone which will in turn damage the control panel and open the doors allowing your troops to storm the place. There are a number of weapons that you will use throughout your journey, including some vehicles like a tank or a small helicopter. Keep your eye on the enemy A.I. though as they are fairly smart and will sneak up behind you if you are not careful.

Going through this game you will come to realize that the series Battlefield had to have been a big inspiration for the developers. Once you finish with the single player campaign, you can take the fight online in huge 50 player multiplayer matches. It is here that you will realize how incredibly deep this game really is. When you are starting up you will initially pick what class you want to be and then once you have done that you will decide what type you want to have such as ground support, air support or whatever else is there that you choose. The online mode definitely has a Battlefield feeling to it as you will have to use a little bit of strategy in order to emerge victorious. In the online battles I participated in I, along with my teammates, had to capture various checkpoints held by the enemy team and keep doing so until we had basically taken over the entire map and the enemy had no where else to go. As we were securing more areas the front of the battle line would physically move forward, indicated by our side of the map expanding while theirs was decreasing with every checkpoint lost.

With the above being said, this game is not perfect. While going through the single player campaign I would sometimes notice the frame rate drop briefly when a lot of things were happening on the screen at once. It was nothing major but it was noticeable. Your ally A.I. would tend to get in your way at times too. I could be sitting there trying to line up a shot and take an enemy out and all of a sudden one of my teammates walks in front of me, effectively blocking my shot. The game does utilize a auto save feature which works pretty well, however, there were a few times when I had to retrace my steps a little after my character had got taken out. As far as length is concerned, the single player campaign is a pretty short one. Depending on your style of play you can probably get through the story mode in 4-8 hours. In the online arena it was a chore at times to try and connect to a game. Once I successfully connected and the multiplayer game got started I did not have any issues, I just couldn’t get started at times. Every time this happened I would get an error message. It’s definitely something that can be fixed with a patch and like I said, once you get into a game it is a lot of fun to play. Getting to jump into a tank or a helicopter and successfully raining havoc down on your opponents gives you a sense of accomplishment as well.

While this game is by no means perfect, it is definitely a fun title to spend some time with. The multiplayer is fun when you can connect, the Achievements are fun to get and you should definitely enjoy the single player story. You will only wish it was longer and had a little more to it.