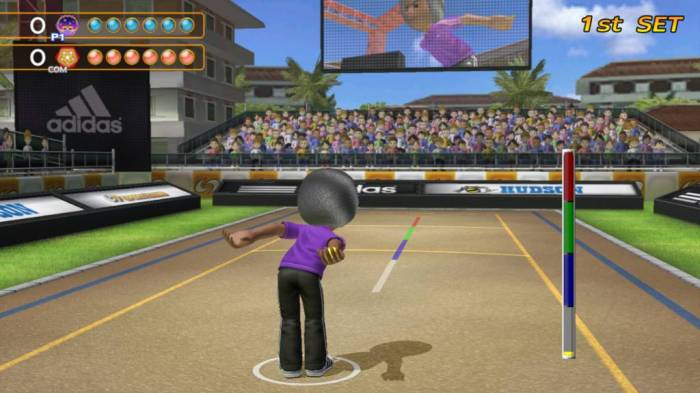 Deca Sports 2 is one of the latest sports compilations for the Nintendo Wii where you get to play ten different sports. Sports such as ice hockey, tennis, road racing, darts and dodge ball are just a few of some of the sports that you can experience. The first time that you play each sport you are offered the option of a tutorial so you can practice the different motion controls that will correspond to the different sports.

The motion controls for each individual sport are pretty natural and no one should really have a problem getting accustomed to them. To serve in tennis you make the up motion to throw up the ball and then flick your wrist to hit the ball as it comes down. There is more control though than in similar titles. Unlike other titles like Wii sports you can control whether the avatar is far from the net or whether you want to run up close. You can hit the ball a couple of different ways such as hitting a line drive or hitting the ball over your opponents head where they can’t get it if they are crowding the net. There is a synchronized swimming event that seems like it would be incredibly boring, however, if you try it on the harder difficulty settings it will definitely present you with a challenge. If that isn’t your speed then there is a racing event or a kendo event where you can whack your opponent in the head.

With those ten sports in the game you have a few different options of what you can do. You can play an “open match” where you pick whatever you want to play at any time. It is basically this title’s version of “exhibition” play. Then there is a league setting where you can join a four team league competition with all ten sports. You can also pick one sport and hold tournaments to see who can do the best. Finally, there is also a challenge mode where you select minigames from each sport and compete for high scores and best times. You can pick whether you want to do “single play” or “team play” where you can play with up to four players. There is also the “locker room” where there is a “team editor,” a tutorial where you can practice on whatever sport you want as well as a user file that will contain all of your information and statistics.

Additionally this title features something that most Wii titles don’t have, online play. Once you log on you have a couple of different options to choose from. First you have “free play” where you will play with similarly ranked opponents. Then you have “friend play” where you will play with your friends, as long as you have their friend code and they have yours. There is also a personal information area where you can edit your player information, enter your friend codes and check to see where you are in the rankings. Overall, Deca Sports 2 is an enjoyable sports title and it is definitely one that families should enjoy. It doesn’t break the mold in any way, however, I can definitely see groups of people having a lot of fun with this title.