Patapon 2 Remastered is one of the latest games to hit the PlayStation 4 in remastered form and it couldn’t have come at a better time. Back in the day on the PlayStation Portable, I had a tremendous amount of fun with this series. It is a rhythm action game that can easily get stuck in your head as you try to help the Patapon achieve the goal. You do this by banging on some drums (in the game, not in real life) to different tunes. If you want to move forward, for example, you have to hit the buttons square, square, square, and circle. You can’t just button mash either. You have to do it in rhythm with the game. When you do it successfully the Patapon will respond accordingly and this is when you come across music and chants that can get stuck in your head. Hearing the Patapon chant Pon-Pon-Pata-Pon or Pata-Pata-Pata-Pon when you successfully hit the right notes to allow them to advance. I have fond memories of playing these games on my PSP and now I get to do it on the PS4, with trophies.

The Patapon series has always been about the rhythm of the game. There isn’t a whole lot of story to speak of in Patapon 2. The basic gist is that they are trying to get to Earthend and it is your job to get them there. Earthend is the promised land for the Patapons and if they can make it there they will be granted eternal bliss. Of course, they have to go through trials and tribulations before they get to this magical land.

Patapon 2 Remastered is a deceptively deep game. If you watch someone play it (or watch one of the trailers) you might think it is fairly simplistic, just another rhythm title. There is a lot that you need to consider when you are on your adventure though. For example, there are a number of different missions that you will have to go through. Some of these missions you will have to go through multiple times because you might get different items. As you go through these missions the difficulty will increase as well. So, for example, as I type this the name of one of the missions is “Angry Mochichichi Lv. 5”. It is level five because I have gone through that particular mission four times so far to get different items and help level up my Patapon (more on this in a moment). It also isn’t necessarily as easy as just walking up to an enemy and engaging in combat. As you get a bit further into the game, sometimes there is something extra you might have to do to successfully take out an enemy or a boss. For example, there is an enemy that will only appear when it is raining. You can see the silhouette of the enemy when it isn’t raining, however, you can only attack them when you can fully see them. To get it to rain to have to perform a miracle, which is a series of button prompts. First, you have to launch the miracle sequence and then successfully make it through that sequence. It might take you a little while to be able to do this as you really need to get the rhythm down. Pay attention to some of the different beats and there is a visual indicator on the screen as well if you prefer to use that. This is where people who are a bit more musically inclined might find it a bit easier to do. Me personally I am not one of those people so it took me a little bit to really get everything down. Once I did though it was a great feeling and I was rewarded by being able to attack the enemy and, eventually, take them out and advance to the next mission.

As you go through missions, eliminate enemies, and accomplish objectives you will acquire different items, some of them rarer than others. These items will help you level up your Patapon army. Well, for starters, it will help you grow your Patapon army. When you first start the game your army is incredibly small. As I write this review however my Patapon army consists of almost 20 warriors. Once you add a warrior to your army you then need to make sure they are leveled up and properly equipped. At times enemies will drop weapons, such as a fire bow. Before you launch a mission there is a screen where you can equip your army as you see fit so it is a good idea to make sure any new weapons you got in the previous mission are equipped. If you want to go through each Patapon and decide what they should have you can do that. If you don’t have the patience for that type of thing you can simply tell the game to optimize the layout to make sure your army is equipped the best it can be at that time.

Before you get to the mission though you will want to make sure your army is leveled up adequately. Each Patapon has a skill tree for you to complete. Leveling up your Patapon requires certain items. As I write this review one of my Patapons is at level six. If I want to level them up to level 7 I need 7 stones, 7 Kuner Fangs, 5 Cafeteria Meat, 2 Mudada Bones and 70 Ka-ching (in-game currency). You get all of these items by going through the different missions. There are also different types of Patapon you can have in your army. There are XL-sized Patapons, Rarepons, and more. Depending on what you want to do can level a Rarepon that is made for a fight who will have the ability fo cause and resist critical damage, knockback, and stagger. There are Rarepons that can cause knock back and sleep effects. There are other Rarepons that can improve your critical hits, however, have low defensive skills and freezes easily. You can begin to see how this works and how you need to strategize for the different situations that you will be put in. You should also be starting to understand how this game can be deceptively deep like I mentioned above and not just something you can button mash.

In addition to the main missions, there are also some mini-games to engage in. These mini-games are another way to earn items and in-game currency. If you find that you are stuck on a particular mission it might time to upgrade a bit. You can replay some of the missions you have already gone through like I mentioned above, or try out some of these mini-games. Much like the rest of the game these mini-games are all about timing and keeping the rhythm but you can get some great prizes if you successfully complete them. These games do cost Ka-ching (in-game currency) though so you will want to be mindful of that. 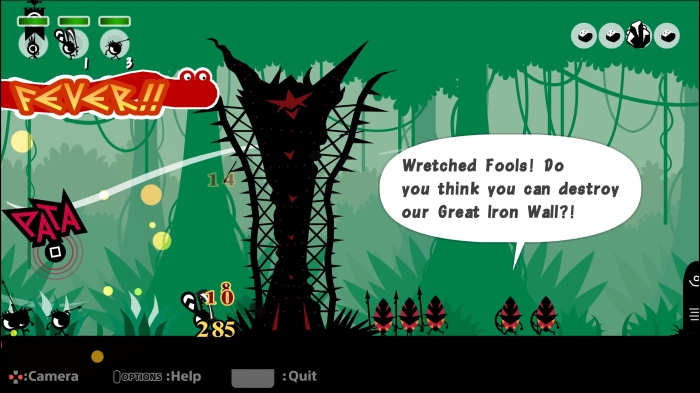 Patapon 2 Remastered is a great addition to the PlayStation 4 library. The rhythm and different chants are catchy enough where they can get stuck in your head. As I mentioned up above, if you are someone that is a bit more musically inclined you will probably have an easier time keeping the rhythm going in this game. That said, this game is accessible to everyone. I don’t have any musical talent at all and I was able to get through it. If you are having trouble keeping the rhythm, don’t give up. Just keep practicing and you’ll get it. I really enjoyed my return to the Patapon universe and now I have trophies I can earn as well and, yes, this game does have a Platinum for those trophy hunters out there. I would love it if other games that are currently stranded on the PSP could make their way to PS4 (or PS5 with that launching later this year). I’m also hopeful that Patapon 3 makes it on to console at some point or, perhaps, a brand new Patapon? That would definitely be a welcome addition.